The annual unveiling of the Festival of Speed sculpture has become a highlight of the Goodwood calendar. Meet Gerry Judah, the polymath artist behind these gravity-defying masterpieces.

Classic roadsters spin around enormous steel arabesques, F1 cars whoosh around tracks like giant Scalextric sets and hang upside down as if frozen in a moment of torque. These vast, hallucinatory sculptures are a magical and annual part of Goodwood’s Festival of Speed and since 1997 they have encapsulated the sheer dynamism and panache of the event. “It’s sculpture as theatre,” says their creator, artist Gerry Judah. “The front of Goodwood House becomes a stage where we perform feats of sculptural engineering.”

Judah is a loquacious deep-thinker with a continent-hopping past, a refreshing candour and the ultimate portfolio career. After attending art school at Goldsmiths and the Slade, he supplemented his life as a fine artist with work in opera and theatre, making props and painting backdrops, then becoming a model-maker and production designer for advertising photography during its 1980s heyday. “If they needed anything – from an Italian city made of biscuits to props for a Nureyev ballet – I did it.” 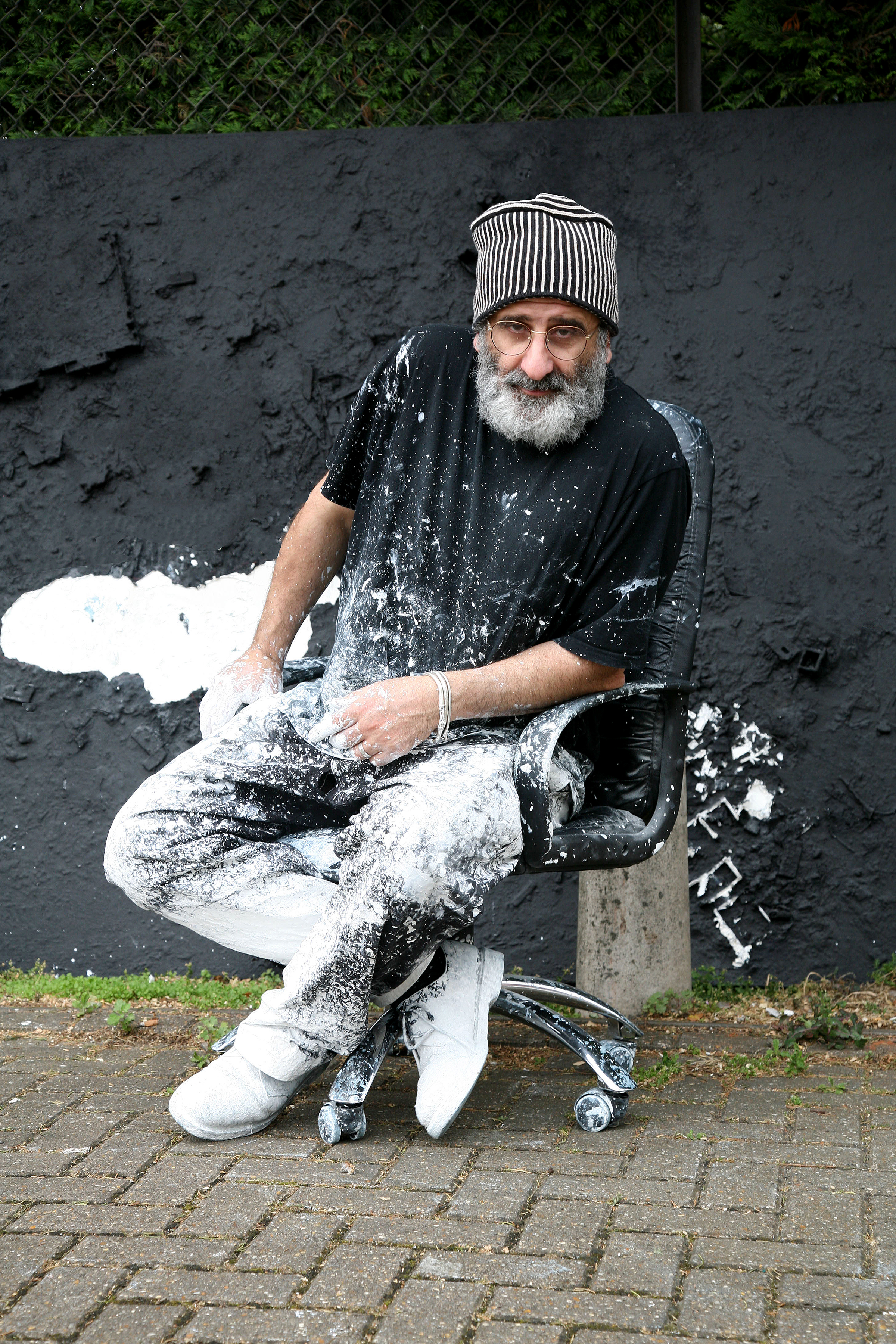 Around this time, Judah worked for photographic talents like David Bailey, Adrian Flowers and Charles Settrington. Years later, in the 1990s, the Earl of March, as Settrington had become (he is now the Duke of Richmond), rang Judah to commission a triumphal arch for Ferrari. “He realised the potential of a central feature that would define the Festival of Speed, its sponsors, their history and the spirit of the event itself,” says Judah.

Each year since then, Judah has come up with new variations on the speed theme. In 2016 a series of spikes supported three BMW classics, as if leaving steel vapour trails; in 2014 an arc curved over Goodwood House with a pair of Mercedes-Benz racing cars passing each other; while in 2015 a pair of Mazdas followed a twisting track skywards. Uniting all the sculptures is a lightness of touch – they’re never overcomplicated or inaccessible. “Sometimes it can be quite hard to make something simple,” says Judah.

Each sculpture begins as “a dialogue”. Judah comes up with the design, develops it with the Duke of Richmond and presents it to the client and sponsor. The process then takes a further few months, during which Judah creates sketches and models and refines the designs. “I still work with pencil and paper and bits of card,” he says. “I can’t even draw a line on the computer.”

Then everything has to be tested by engineers, as “these pieces have massive wind loads and need enormous foundations”. This summer’s design – celebrating 70 years of Porsche – is the tallest so far at 52 metres, the same height as Nelson’s Column, yet so fine at the bottom that you’ll be able to put your hands around it. All of this needs help from Judah’s engineers Diales and nearby steel contractors Littlehampton Welding. “These are the real heroes,” says Judah. “They have the right attitude. Nothing fazes them.” The vast sculptures are delivered in sections, then bolted and welded together with the classic cars mounted on-site. “This needs great care,” says Judah. “These cars are priceless. Often they’re back racing as soon as they’re demounted.”

From an ancestral background in Baghdad’s Jewish community, Judah was born and grew up in Kolkata and moved to London when he was ten years old: a journey that has informed many of his pieces, which often have climate change, humanitarian and anti-war messages. He’s currently working on a large sculpture that he says will be “Kolkata’s Eiffel Tower”. The Goodwood pieces are temporary and, for the most part, end up recycled, which seems a shame. But one remains intact, his enormous nose-down Jaguar E-Type, which may yet gain pride of place at Jaguar’s Coventry factory. 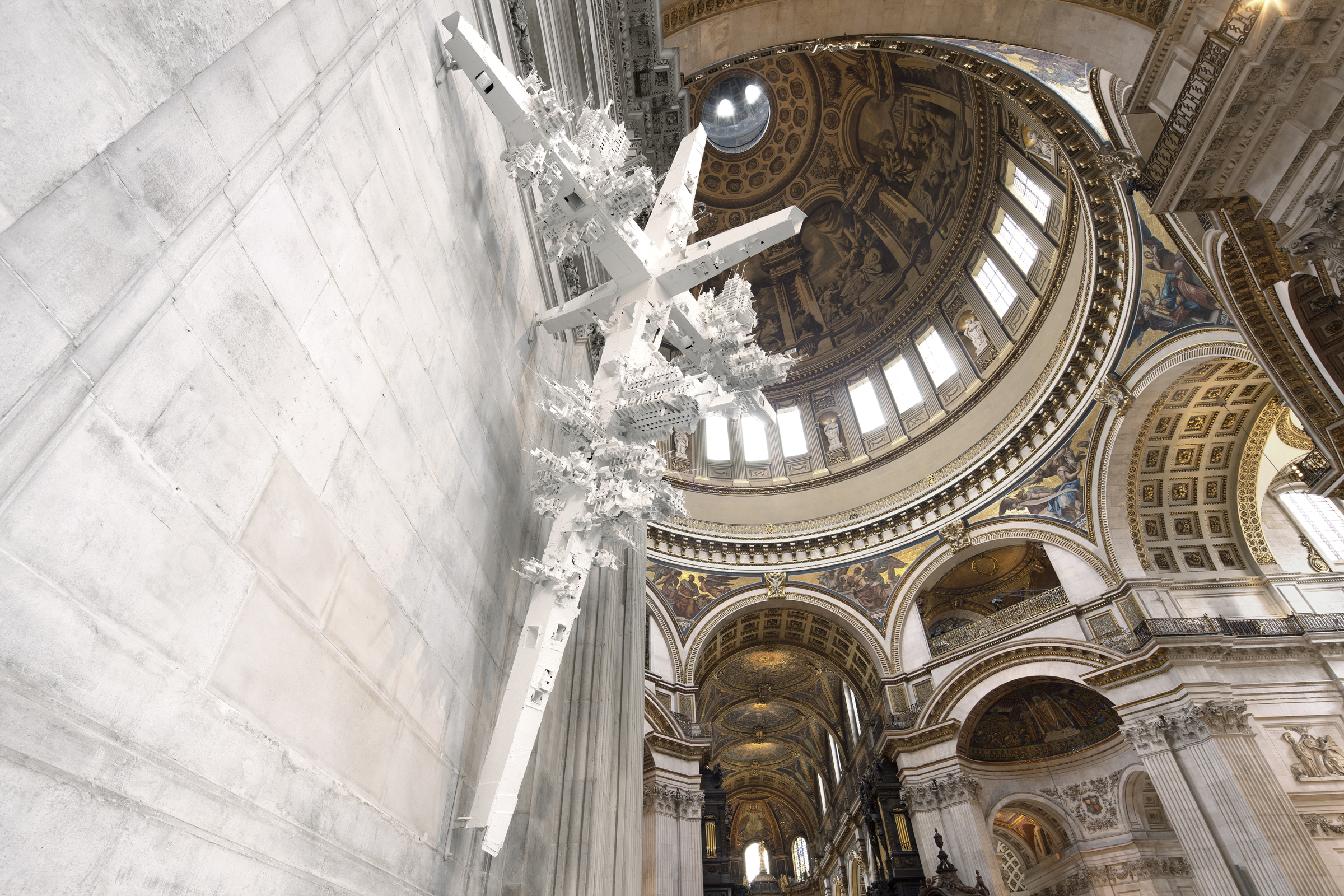 One of the artist’s twin St Paul’s Cathedral installations.