From pampered foxhounds to Britain’s first Pekingese, canine companions have always played a prominent role in Goodwood life – as you can see from their frequent appearances in the Estate’s art collection

The 3rd Duke of Richmond with the Charlton Hunt by Goerge Stubbs, 1759-60

There are ancestral portraits everywhere you look at Goodwood House; as in most country houses, the family tree is on the walls for all to see. And, alongside the ancestors are birds and animals: toucans on the Sèvres service, mythical beasts, like the stone sphinxes flanking Carne’s Seat, or Sheldon, a Chestnut Hunter, one of six paintings of hunters commissioned by the 2nd Duke from artist John Wootton. Critters everywhere, but most of all, dogs – an extraordinary variety of dogs, popping up like so many canine extras alongside whoever is meant to be the star of a portrait: the spaniels sprawled beside one of those hunters or cosying up to a Lennox family member, the Jack Russell perched on a house guest’s lap during Race Week, or the mysterious mutt (what is it – a corpulent greyhound, a giant bull terrier?) in Canaletto’s Allegorical Tomb of Archbishop Tillotson, commissioned by the 2nd Duke of Richmond.

At Goodwood, however, dogs are seldom precisely an extra; they have a tendency to thrust themselves centre stage. True, the white German shepherd dozing behind The Duchess of Richmond (the Paul Brason portrait of Susan, Duchess of Richmond) might have the flimsiest of cameo roles. But just try telling the lurcher at her feet that his is just a bit part. But all this doggy pre-eminence is only right and fitting, given that but for foxhounds – and the foxes they pursued – Goodwood House might have remained simply a small estate and house, rather than the seat of a great dynasty. For it was this emerging sport, and the nearby Charlton Hunt, that brought Charles Lennox, the 1st Duke, to Goodwood, where he initially rented the house for the hunting season, then bought it outright in 1697. 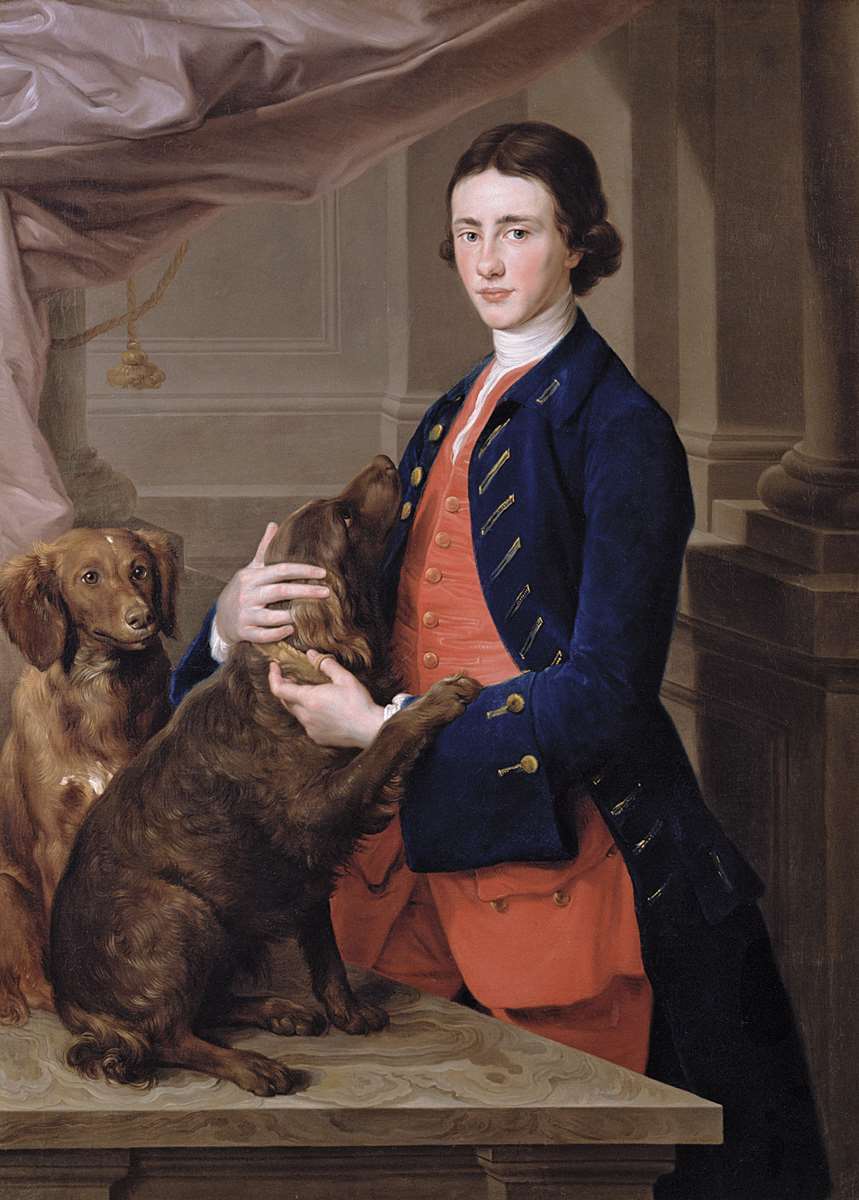 A love of dogs, sporting and otherwise, could be said to be in the 1st Duke’s DNA. His father was Charles II – a man who liked English toy spaniels so much, the breed was named after him. His mother was one of the King’s mistresses, Louise de Keroualle, Duchess of Portsmouth. Louise’s portrait hangs in the ballroom at Goodwood – complete with pet spaniel, sniffing around in the shadows at the foot of the painting.

The pursuits of hunting – and later shooting and fishing – were a key part of country life as enjoyed by generations of the Lennox and Gordon Lennox family on their land at Goodwood and later in Scotland – with generation after generation of foxhounds and gun dogs a familiar presence in their lives.

For centuries, the chase in England had generally meant the pursuit of deer, but in the 17th century, fox hunting emerged as an exhilarating alternative – and nowhere more so than at Charlton, just three miles from Goodwood itself. The hunt that first attracted the 1st Duke to the area was an elite, invitation-only affair – and thought to be the earliest documented. At one point its membership included half the knights of the Order of the Garter. Grandees such as the Duke of Devonshire and the Earl of Oxford kept hunting boxes in Charlton village and held a grand annual dinner there. The 2nd Duke turned out to be an even more enthusiastic huntsman than his father. In January 1738 he took up his diary to record “the greatest chase that ever was”, in which the hounds ran continuously for more than nine-and-a-half hours – covering some 57 miles of Sussex countryside over the course of one day. The Duke was one of only three riders to stay the distance. 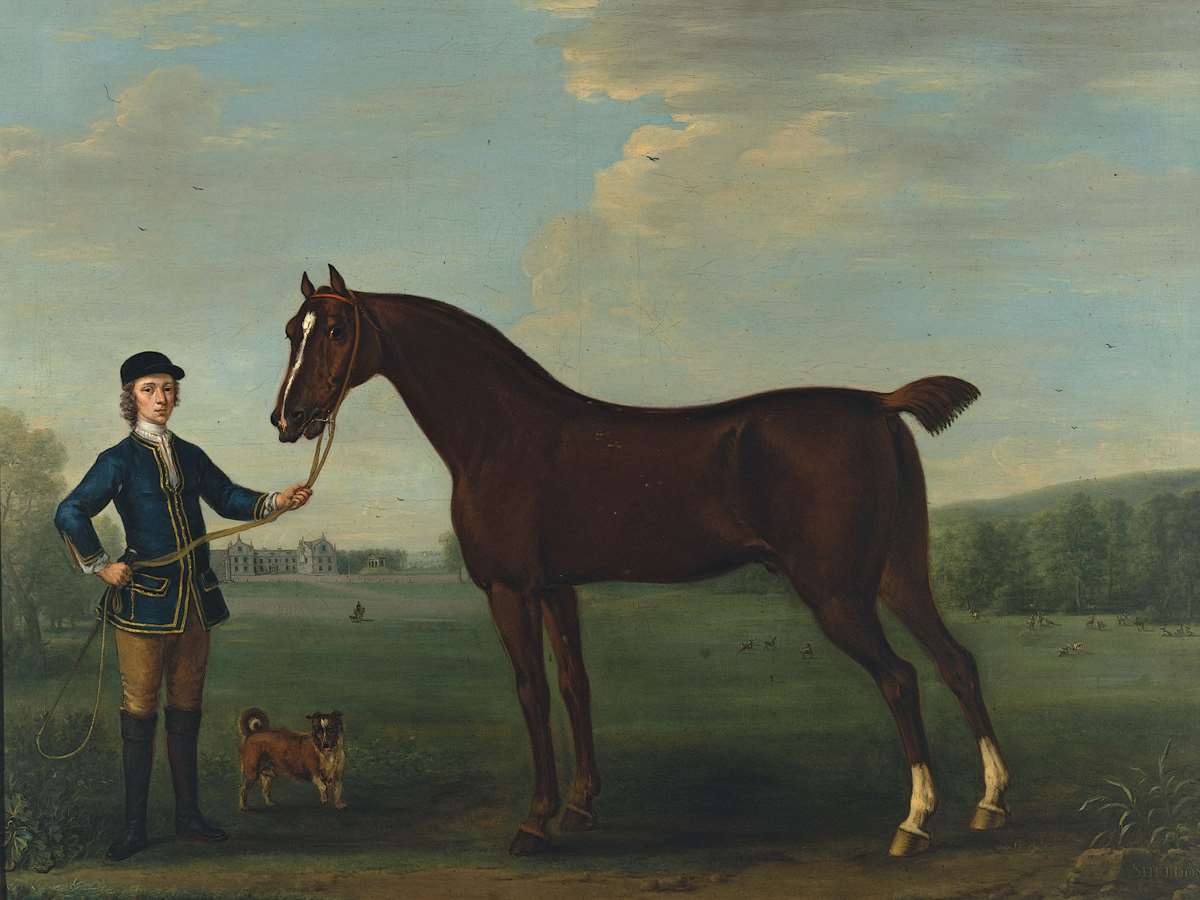 We know the foxhounds’ names from the Charlton Hunt’s ledgers: Pompey, the offspring of Comfort & Pompey; Kitty, of Comely & Ranker, and so on. But sadly the pack was dispersed in 1750 – when the 2nd Duke died suddenly. But just seven years later the 3rd Duke took up the sport in a big way, bringing back some of the bloodlines from the original pack and installing his hounds in the splendid new kennels he built at Goodwood, commissioned from architect James Wyatt. Along with Sir William Chambers’ splendid stable block, this gave rise to the running joke that at Goodwood, the animals always have the grandest homes – and true enough, the 3rd Duke’s hounds enjoyed an early form of central heating, an innovation that wouldn’t arrive at the main house for more than a century.

The 3rd Duke’s soft heart when it came to dogs is also apparent in his portrait by Pompeo Batoni, in which his spaniel steals the show with that imploring paw placed on the Duke’s wide cuffs – in a gesture every spaniel owner would recognise – even as the Duke obligingly caresses his ear and scratches him, just where he likes, under the collar. We might think of the Duke as a grand seigneur and Enlightenment figure – a reader of Rousseau, man of science, Grand Tourist and collector of sculpture. But we see him here more as the originator of walks, of treats, and of downed birds, eagerly to be retrieved. What’s more, this is how the Duke commissioned this modish Roman artist to portray him while in the midst of that fashionable Grand Tour, and there’s even a companion picture of his much-loved brother, George, also with an adoring spaniel – suggesting that the Lennox boys took their favourite dogs with them on their travels. 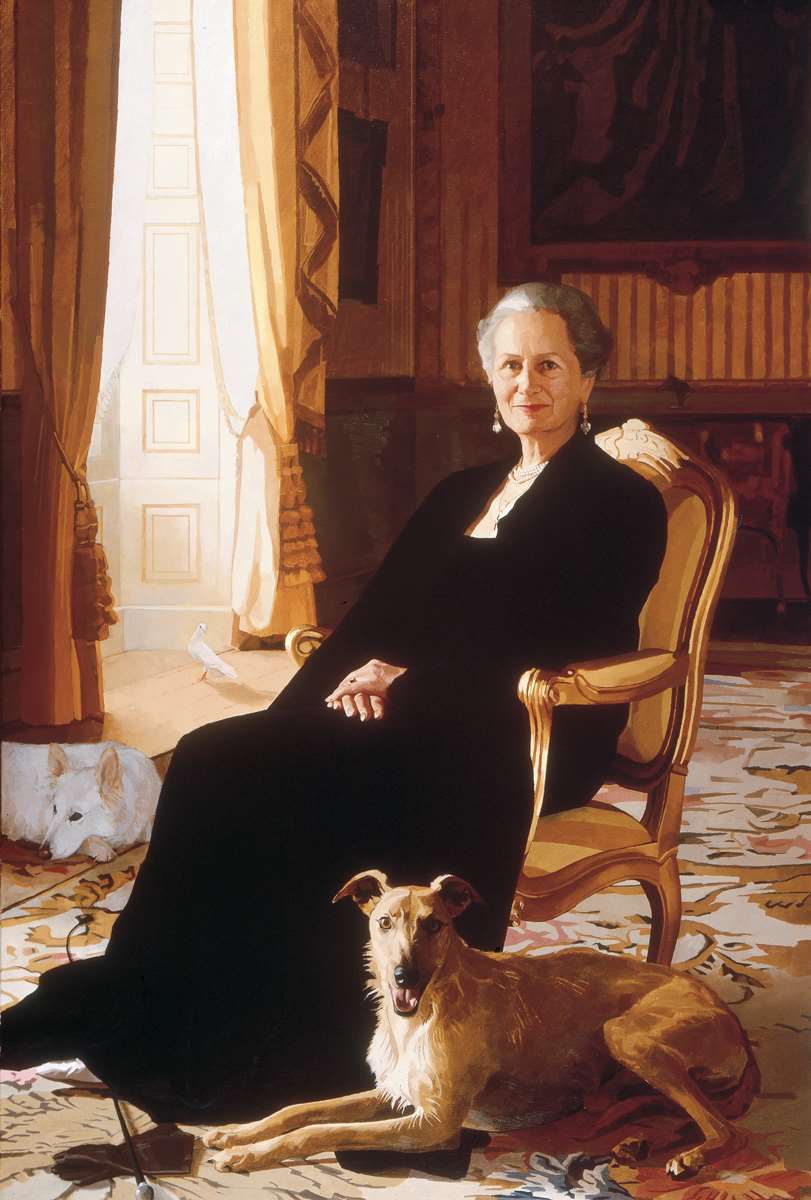 The Duchess of Richmond by Paul Brason, 2002 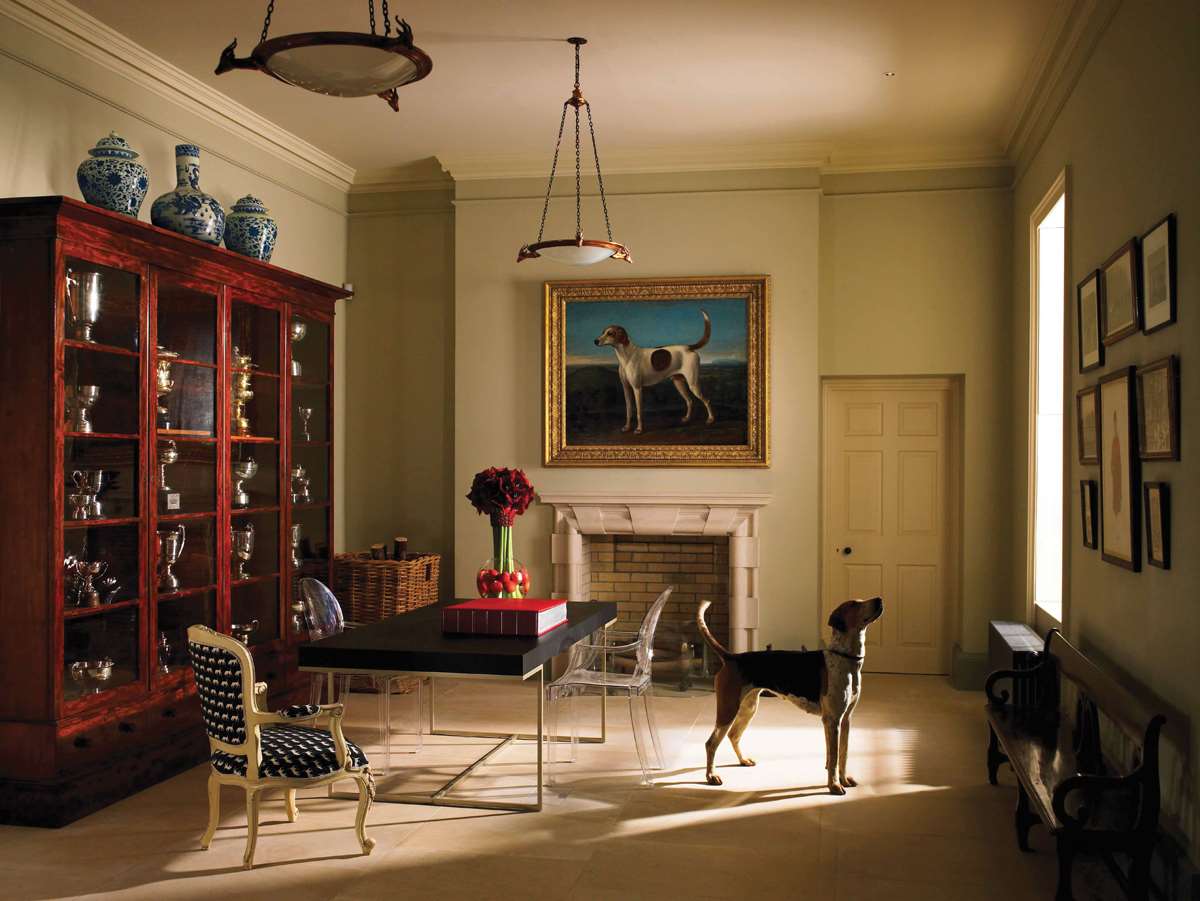 The Kennels, with John Wootton's portrait of the foxhound Tapster in pride of place

Some of the 3rd Duke’s foxhounds are immortalised in a painting he commissioned by George Stubbs, The 3rd Duke of Richmond with the Charlton Hunt, in which we know the hounds portrayed are accurate portraits of known dogs. Stubbs also painted an equestrian portrait, now in an American collection, of The Countess of Coningsby in the Costume of the Charlton Hunt – and trotting behind the Countess’s hunter, perilously close to its hind legs, we can see what might just be a red Pomeranian, which would make the fashionable Lady Coningsby an “early adopter” of the breed, then only recently imported from Germany by Queen Charlotte.

A century or so later, Goodwood was one of the first places where another exotic breed might be spotted – surely one of the strangest spoils of war ever. Today, Pekingese dogs are popular pets all over the world. But for centuries the breed was kept exclusively by members of the Chinese Imperial Court – and bred for courtly life. In 1860, during the 2nd Opium War, the Emperor fled his Summer Palace as a joint British and French force approached. One of his elderly aunts remained, however – only to commit suicide as the troops stormed the palace. Her five pet Pekingese were seized by English officers, with one given to Queen Victoria (who named it Looty), two presented to the Duchess of Wellington, and a further pair given to the Duchess of Richmond. It is from these two Pekingese, called Guh and Meh – and possibly Schloff, one of the pair presented to the Duchess of Wellington – that the famous Goodwood strain of Pekingese evolved. And once again, they pop up throughout family photographs, sitting at the feet of the future 7th and 8th Dukes, for example, at a shooting party at Gordon Castle – a living, yapping relic of imperial China transposed to the Scottish Highlands and Sussex Downs. 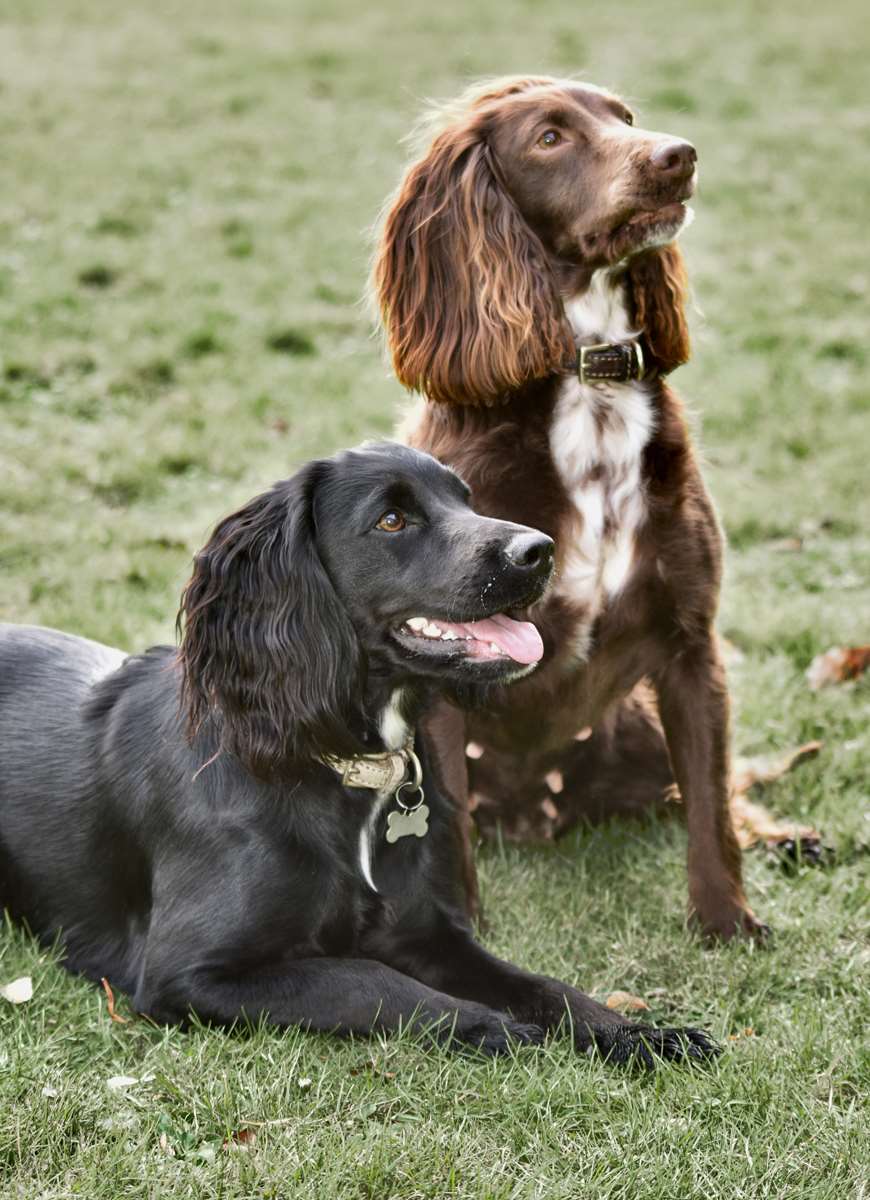 The 7th Duke briefly reintroduced what was then called the Goodwood Hunt after a long hiatus in the 1880s. By then, Wyatt’s splendid Kennels were home to the Duke’s racing trainer, so the Duke housed his hounds just across the road at the newly built Hound Lodge. It lasted just 12 seasons and, but for the spectacular one-off meet of the Charlton Hunt held in 2016 to commemorate its former glories, that was the end of Goodwood’s long and close association with hunting (although the Chiddingfold, Leconfield and Cowdray Hunt still hunts on the old Charlton Hunt land). Today both The Kennels and Hound Lodge are key elements in hospitality at Goodwood and both, appropriately enough, are eminently dog-friendly. The Kennels is Goodwood’s private members’ club – complete with individual dog bowls for members’ pets in the hall, over which John Wootton’s portrait of the foxhound Tapster presides. And Tapster is very much the star of that painting. Across the road, canine guests of Hound Lodge get to decide between bedding down in the restored kennels outside in the garden or dozing in front of a log fire indoors. No contest, surely.

Tickets for Goodwoof, Goodwood's brand-new event all about the dog, are on sale for 2020 now.

This article is taken from the Goodwood magazine, Spring 2018 issue

You may also enjoy reading