Doug Nye – The Day BRM Put Goodwood On The Map The Goodwood Motor Circuit was just two years old when its Daily Graphic-sponsored International race meeting was held on September 30, 1950. It would prove to be Goodwood’s first-ever event of genuinely nationwide significance. It held an importance far beyond the normally confined audience of real motor racing enthusiasts.

The reason for that was the presence of Britain’s much-publicised great white hope for Grand Prix racing success – the 1½-litre two-stage centrifugally supercharged BRM V16. After too many years of promises and delayed development the car was brand-new then. Nobody knew that it would prove in essence to be almost as big an over-promoted flop as the floundering Government’s East African Ground-Nut Scheme – trying to grow peanuts in land entirely unsuited to the crop – or the Bristol Brabazon, the world’s largest airliner with multiple major drawback – its eight engines were piston radials, powering propellers, rather than jets, it was just too big, and not a single airline could see any possible profit from using it. The British public had been fed what would today be described as heavily-spun news majoring upon the “International prestige” to accrue from such grandiose dream projects, and when they fell flat on their faces politicians competed with one other to avoid any linkage with them.

The same was going to happen to the BRM V16. After huge publicity over several years, the car had made its long-awaited, long-delayed debut in the ‘Daily Express’ Trophy meeting in August 1950. One car was delivered on race morning, having missed practice, for French ace Raymond Sommer to drive. He started from the back row of the grid, but at flagfall his BRM’s final-drive universal joint bodies both sheared as Sommer slammed home the clutch. The car just rolled forward a few yards, and died… The vast crowd groaned, then jeered. Back in the paddock pennies were thrown into its cockpit. Newspaper headlines screamed ‘FLOP!’ and ‘BRM – Blooming Rotten Motor’.

Project creator Raymond Mays and the cooperative industry British Motor Racing Research Trust needed desperately to regain public regard, to establish some credibility. So both complete BRM V16s were prepared for Goodwood, and grizzled British veteran Reg Parnell was entrusted with the responsibility of driving. Practice period shot of the new BRM V16 – chassis ‘No 2’ – in shelter, team transporter in the paddock beyond.

A 12-lap Formula 1 race followed – 28.8 miles – for ‘The Daily Graphic’ Trophy. Parnell drew a second-row starting grid place, and after another gentle start displaced ‘Bira’ for the lead. Years later, in the files of the BRM Trust, I found a transcript of the live commentary broadcast by BBC radio that day:

Raymond Baxter: ‘And here comes the BRM now, coming round going into one of its last laps (noise of car) the engine sounding as crisp and lovely as ever, and there’s a long gap now before “Bira” comes up – trying to get by Johnny Claes (phonetic). He’s lapping Johnny Claes, taking the wide line. In the meantime the BRM must be (noise of car) approaching St Mary’s very fast, so over to Robin Richards…’ Robin Richards: ‘And I can’t see the BRM at the moment – there’s no sign at the moment, but I’m peering out through this haze – yes, he’s just in sight and he’s got quite a comfortable lead. He’s streaming down the straight now towards me and I can’t even see ‘Bira’; there’s a tremendous lead – he’s pulled nicely away in these last three laps. Just listen to him come by. He’s approaching me now. Listen…’ (noise of car).

“And now ‘Bira’ is coming up – there must be a nice two hundred, three hundred yards lead, and the BRM is streaking away up to Lavant Corner – yes, he’s just going into Lavant now. And now ‘Bira’s coming up behind, he’s entering Lavant. Just braking and going in and he is into the corner now, and the BRM by this time is just streaking away up Lavant Straight and should come into your sight any time now, Raymond Baxter.’

Raymond Baxter: ‘And I don’t know how many thousands of eyes there are looking into this bad visibility to see the BRM win this event, and it almost certainly shall (noise of car) but the excitement here is enormous and there’s a terrific atmosphere of triumph in the air! I’m looking down the road now. Just at this moment the visibility has gone and got considerably worse again, but the BRM is just coming down Lavant Straight now – he’s safely round Woodcote – he’s coming down the left-hand curve – here he comes – chequered flag out for him – THE BRM WINS! (noise of car). And – relatively unusual thing at a motor race meting – there’s pronounced cheering as Reg Parnell wins the Goodwood Trophy 1950 on the BRM…’ 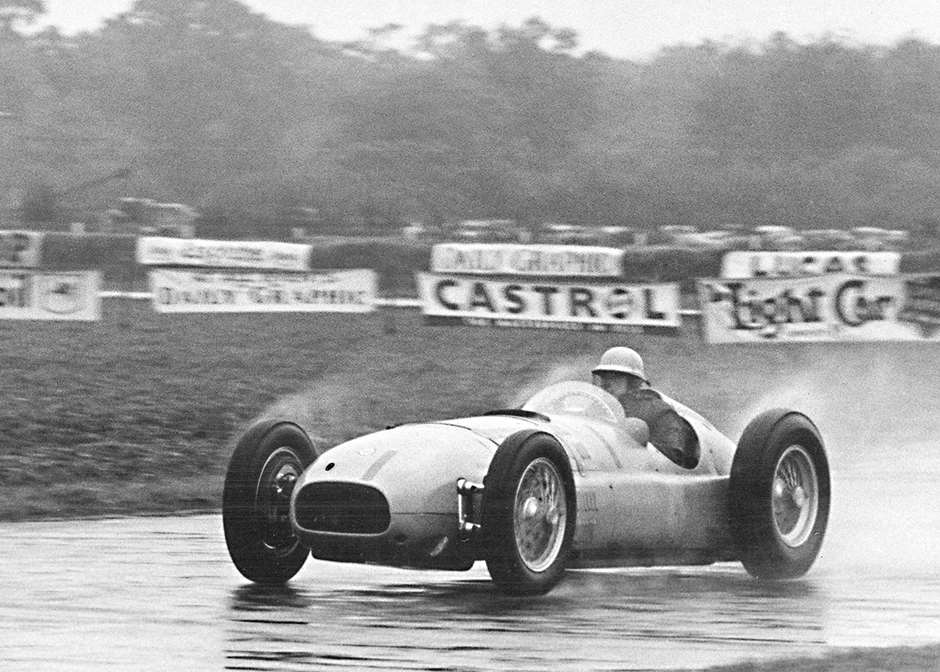 When a recording of this live commentary was played on the BBC Overseas Service on October 1, 1950, it was introduced like this: ‘A good deal of publicity has been given in the Press over here, at any rate, to the teething troubles of Great Britain’s new racing car, the BRM as it’s called. But now 25,000 people at Goodwood have just seen the BRM overcome all difficulties, and some extremely bad weather into the bargain, to win its first two races under the noses of some of the best European machines and drivers…’

Following that weekend, some cautious voices ventured to point out that, perhaps, it hadn’t been quite like that. Fleet Street went quite overboard by heralding the new all-British world-beater’s brilliant victories. Amongst the responsible press even The Daily Telegraph headline read: ‘BRM TRIUMPH RENEWS HOPES’ and its report described how Parnell ‘…streaked past Bira after the first bend like a jet-fighter passing a bomber…’

Amongst the specialist press, Autosport enthused: “Goodwood, 30th September 1950, was a red letter day for British motor racing… Reg Parnell gave positive proof of the raceworthy possibilities of the BRM… Parnell was the ideal demonstrator. On a circuit made treacherous by heavy rain, he went fast enough to keep in front, obviously driving the car well within its capabilities. After the Silverstone debacle, the satisfactory showing of the BRM was heartening to its sponsors, and delighted the spectators…’ By the time the BRM V16 became a frequent winner, in 1953, it was a much more ugly car! ‘Uncle Reg’ again, in the Goodwood paddock…

Motor Sport – detested by BRM supporters as a persistent “knocker” of the entire project – was perfectly even-handed and objective: ‘It was gratifying that the BRM driven by Reg Parnell won both its races… what then, did it all add up to? Everyone, ourselves included, was delighted that the BRM won, but it is nonsense to say that the car was proved a world-beater in full-length Grands Prix on its Goodwood showing or that it subdued “strong opposition”. It raced, in fact for just over 30 minutes, or 40.8 miles… enormous credit goes to Raymond Mays for immediately pressing for a BRM entry in the 200-mile race at Barcelona, even at the risk of the cars “blowing up”. That is a far more sensible test, one from which valuable lessons, victory or not, cannot fail to result, and it is high time the BRM was tested in this manner… The thoughts and good wishes of every British enthusiast are with Mays and the Trust…’

Future BRM Chief Engineer Tony Rudd was working with the princely Chula/ ‘Bira’ team at that Goodwood meeting and he told me that in fact ‘Bira’ complained afterwards that Reg had baulked him and nearly had him off the road several times. He said it was not an important enough race to risk his car in a senseless collision, and of all people, Reg was the last one to tangle with in such a fashion… In fact pig farmer Reg was a rugged old racer, he had been banned from Brooklands racing pre-war after a collision with gorgeous little Kay Petre’s Austin which had nearly killed the lady driver, and with so much at stake for his BRM paymaster that day I have little doubt he would have given the Siamese Prince no racing room whatsoever…

But this was a beginning for BRM, which the team took many years to emulate at World Championship Grand Prix level. Nonetheless, Goodwood had been the stage for a truly historic event – which put both BRM, and the Sussex circuit, squarely ‘on the map’.