I was walking through the Motor Circuit’s deserted paddock area a few weeks ago and looking at the empty car shelters I could not help thinking back to the old photographic images burned into my memory banks.

I look about and strolled a few yards this way, a few yards that (I’m still an Imperial kind of chap – rather than metric – you will appreciate) and then thought ‘Yes – it must have been just about here that Robin Read took that Box Brownie snapshot of John Cooper testing the Cooper-Sunbeam here way back around 1949-1950…’

When I got back home, I had a shuffle through the old prints and negatives, and there – sure enough – was good old John (what a splendid gentleman he truly was) sitting on that virtual buckboard, just about where I had pictured him.

One day, late in 1949, a Major Barker had contacted the Cooper Car Company in Surbiton. The good Major was PA to Sir Bernard Docker, chairman of BSA, Daimler, Hooper Car Bodies and more, whose lavish spending (largely to please his extravagantly publicity-conscious wife, Norah) just about filled the contemporary gossip columns of the national press. Sir Bernard was Norah’s third husband. After hitting London’s social scene in the 1930s as a dance hostess at the Café de Paris, she had married Clement Callingham, head of the Heneky’s wines and spirits company. He died in 1946 whereupon she married Sir William Collins, President of Fortnum & Mason. Within two years, he also died, and in 1949 Norah married Sir Bernard Docker. She had a 12-year-old son, Lance, by Clement Callingham, and Major Barker now commissioned the Cooper Car Co to build a little car for the boy to drive around the family estate at Poole in Dorset. It was to use an engine made by one of Docker’s companies.

In 1943, BSA had bought Sunbeam motorcycles from AJS/Matchless. For 1947, they introduced an unusual 488cc, low-compression, in-line twin-cylinder model, with single overhead camshaft, all designed by Erling Poppe around the bottom half of a pre-war prototype BSA in-line twin.

The result was Sunbeam’s balloon-tyred, bulbous-mudguard, S7 motor-cycle which was aimed (rather like Austin’s A90 Atlantic) at the US market, without first seeking opinion from gen-yoo-wine American buyers. Initially, its 2-cylinder sohc engine seemed quite lively but, because BSA wouldn’t fork out for a proper crown-wheel & pinion final-drive, the S7’s shaft instead powered a worm-and-wheel system. This proved so frail the engine had to be de-tuned to 25bhp… which turned-off most American customers when a cooking British ohv single from Ariel, BSA, Matchless, Norton etc offered 26-30bhp in chain-drive frames that were 30-40lb lighter. A stock cammy Manx Norton gave about 45bhp, and Joe Craig’s ‘works’ engines a reputed 50-ish. Sunbeam’s S7/S8 engines were revamped in 1949, but the reputational damage had been done. Sales never really recovered as Cooper plopped an S7 engine, gearbox and shaft-drive into a special sports car version of their 500cc F3 frame for Lance Docker. As John later told me: ‘It vibrated so much it was completely useless, and so we never completed it. I sold them the redundant old Cooper-Vauxhall [Cooper’s first postwar sports car] instead and it was modified by Hooper’s to carry a mock Daimler grille and flashy interior.’

The top photo shows John warming-up the unbodied little Sunbeam S7-powered prototype in the Goodwood paddock. In these health & safety-conscious days it’s enlightening to see a gravity-feed petrol tank rigged on stays above the engine. Here was one little all-British special… commissioned by big industry from little industry – which went nowhere fast.

In fact of course Goodwood saw far more august and successful Coopers tested there, including the streamlined-body 500cc record and race car, pictured freshly unloaded from a flat-truck onto the old paddock ramp (whose death warrant I regrettably wrote, if not actually signed).

And then there are such cars as the streamline-bodied Formula 1 Connaught B-Type in its original form, which was shaken down at Goodwood as well as on the faster circuit at Silverstone in 1955. And the very first ‘Brabham’ Formula Junior car – known at the time as the MRD after the initials of Jack Brabham’s and Ron Tauranac’s new company ‘Motor Racing Developments Ltd’. That was in 1961 and here’s Tasmanian farmer-cum-racing driver Gavin Youl using the little gem right here at the Motor Circuit that season.

Of course the Brabham marque used Goodwood regularly to develop, test and prove their progressive series of products, including the delightful little BT5 sports-racing car which we also have recorded on celluloid – sitting right there in the pit lane one test day. The little car was to be campaigned under the Ian Walker team banner in 1963, and the outfit’s two Australian drivers would both go very far indeed. Study the photo and there in the left background, hands in pockets, is rugged old ‘Hawkey’ himself, Paul Hawkins, the Sydney-sider son of a preacher man himself. You would never have believed it to hear his salty language. 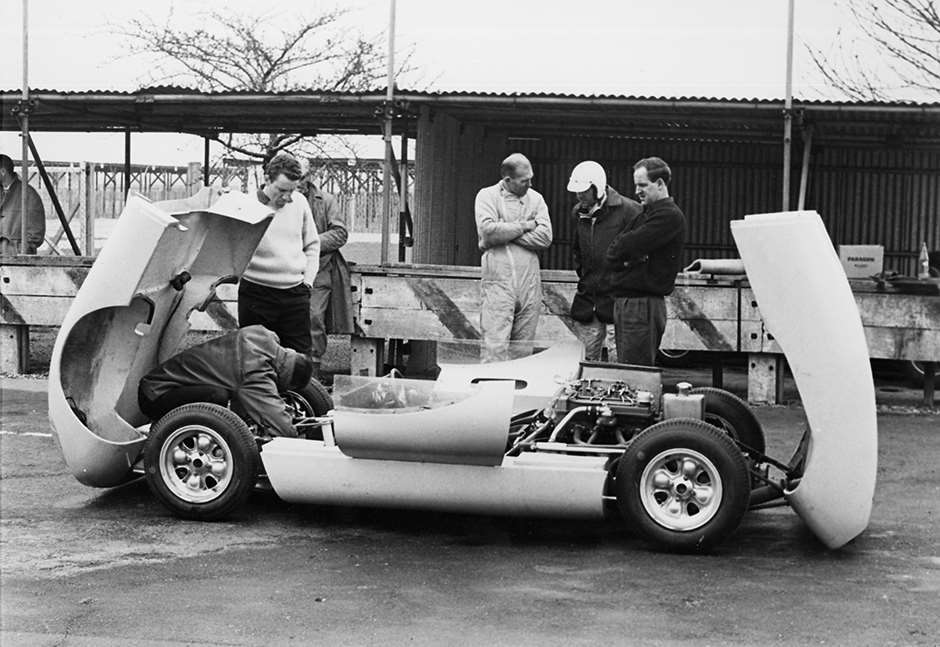 And in the far background the old corrugated-iron roofed pit row would have been shifting, and creaking, and probably clanking in the wind. How the shades of these great characters still walk with us at Goodwood today…