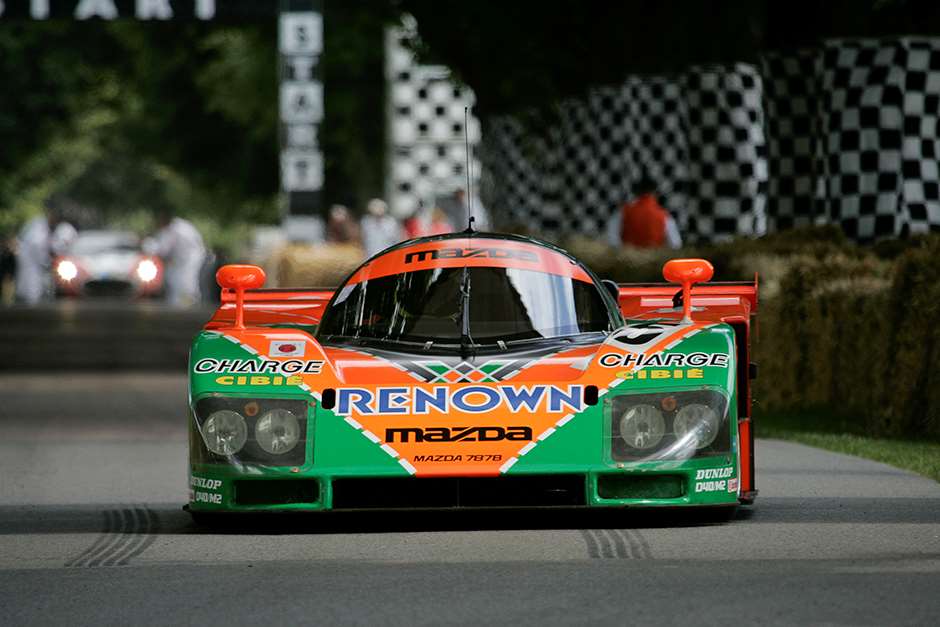 If you were trackside at the Le Mans 24 Hours in 1991, you’ll recall vividly the sound of three cars in particular. There’s little doubt, in fact, that, almost a quarter of a century later, the unique, mechanical scream of the trio of orange-and-green, rotary-engined Mazda 787B Group C cars has not remained safely uploaded to your aural hard-drive.

And what a noise!

The Japanese firm, which celebrates its motorsport achievements and convention-defying roadcar technology in some style at this year’s 23rd Festival of Speed, had battled throughout the 1980s to tame the French endurance classic, but had fallen short in its quest to get one over Porsche, Jaguar and Mercedes. A brace of seventh-placed finishes in 1987 and 1989, with victory in the IMSA class each time for the 757 and 767B respectively, was its best achievement.

Huge national pride was at stake, then, and for 1991 the battle to become the first Japanese marque to conquer Le Mans, continued unabated. The factory-blessed Mazdaspeed outfit assembled a line-up of three 787Bs – all-new machines with upgrades to the rotary powerplants that helped push power to 900bhp (in qualifying), while improving – Mazda hoped – the cars’ reliability. And it recruited crack French race team Oreca to mastermind the twice-round-the-clock marathon.

After starting 19th on the grid, the #55 machine, crewed by Briton Johnny Herbert, Belgian Bertrand Gachot and German Volker Weidler, worked its way up to the front, taking the lead in the 22nd hour as its rivals hit trouble. A broken headlamp bulb and an over-heating rear-wheel bearing had been the only things that needed attention, vindicating Mazda’s efforts to get on top of any mechanical fallibility.

Lotus Formula 1 driver Herbert, the fastest of the trio, famously stayed in the car for an extra stint at the end to ensure the car remained out front and, just two days before his 27th birthday, made history in the 59th running of the world’s toughest race by giving Mazda the outright victory it had craved for so long.

Sportscar racing diehards who witnessed the 787B’s success that year will recall Herbert having to be hauled from the car exhausted. So dehydrated was he, in fact, that he didn’t make it to the podium ceremony. Twenty years on, the Essex ace got to drive the wailing racer at the Circuit de la Sarthe once more – in a 2011 demonstration – and finally climb onto the to step of the rostrum for the first time.

Mazda is set to demonstrate an exciting line-up of its Le Mans racers at the Festival later this month, including the 757 and 767B class winners and two examples of its most iconic endurance machine, the 787B.

And unless one of the Toyota TS040 HYBRIDs can pull off victory in this weekend’s 83rd running of the 24 Hours, the orange-and-green rotary screamer will remain the only Japanese-built car to conquer Le Mans.

If you’ve never heard this extraordinary machine on song, you’re in for a treat. Either way, you’ll know when it’s coming. Just make sure you’ve got those earplugs ready…