There can be few motor cars ever to have gone from zero to legendary in as short a time as it’s taken Ken Block‘s Hoonicorn Ford Mustang. It doubtlessly helped that the car was built to perform in the seventh of Mr Block’s much admired Gymkhana videos, but such is the spectacle of watching this car being put through its paces that it deserves some pretty lofty status in its own right. Visitors to this year’s Festival of Speed were afforded the privilege of a close-up view of 845bhp, four-wheel-drive beast and weren’t disappointed, as you can see here.

Block himself has said of the car: ‘The attention to detail with the fabrication and bodywork blows my mind. This is hands-down the best Gymkhana car I’ve had yet.’ Looking at some of the close-up shots here we’d have to agree wholeheartedly about the standard of the build. The car was revealed to the public for the first time in November 2014 at the SEMA show in Las Vegas after a two year build by ASD Motorsports in North Carolina. The Ford V8 displaces just over 6.7 litres and serves up a maximum of 720lb.ft of torque as well as 845bhp. All that lusty snort is then sent through a six-speed, four-wheel-drive transmission with a hydraulic handbrake (operated by the enormous ‘Hoonigan’ lever sprouting up from the transmission tunnel) to enable our hero to lock up the rear wheels at a nanosecond’s notice and send the car into a slide. The body sits atop an extremely strong custom made frame (check out the quality of the welds in some of our pictures. Borderline artwork …) and the whole lot is suspended by a gorgeous inboard ‘rocker’ suspension setup. 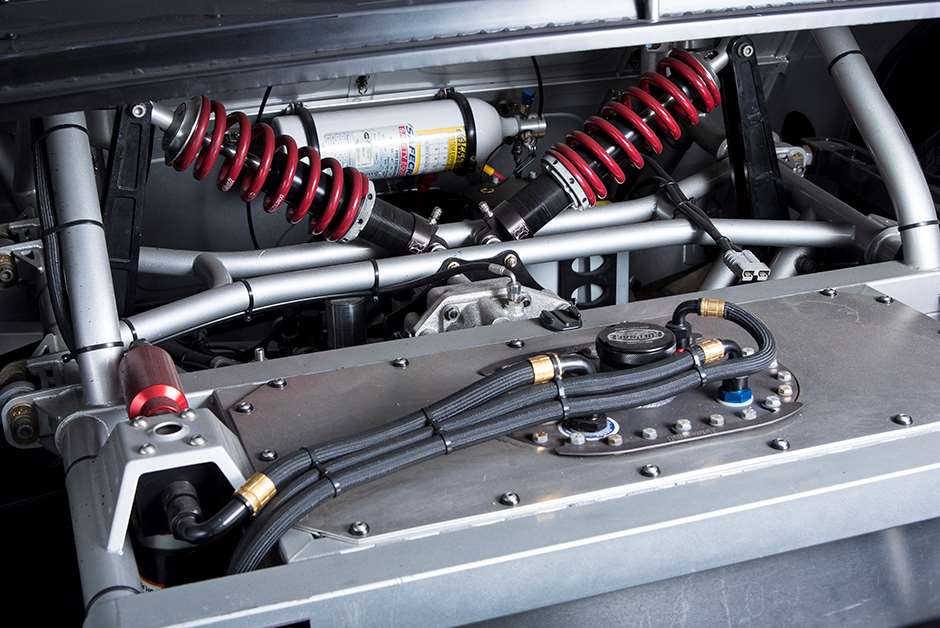 The inspiration for the car’s very businesslike appearance apparently came from a blend of current WRC cars and old-school DTM machinery. Strictly speaking there’s very little about the car that originally came from a 1965 Ford Mustang, but there’s no denying that it looks the business and sounds even better. We look forward to seeing what Ken and the Hoonigan team do with the Hoonicorn next. Come to think of it, what on earth will they replace it with? Whatever it is we’d stick our necks out and say that another Festival of Speed invite will be on its way …