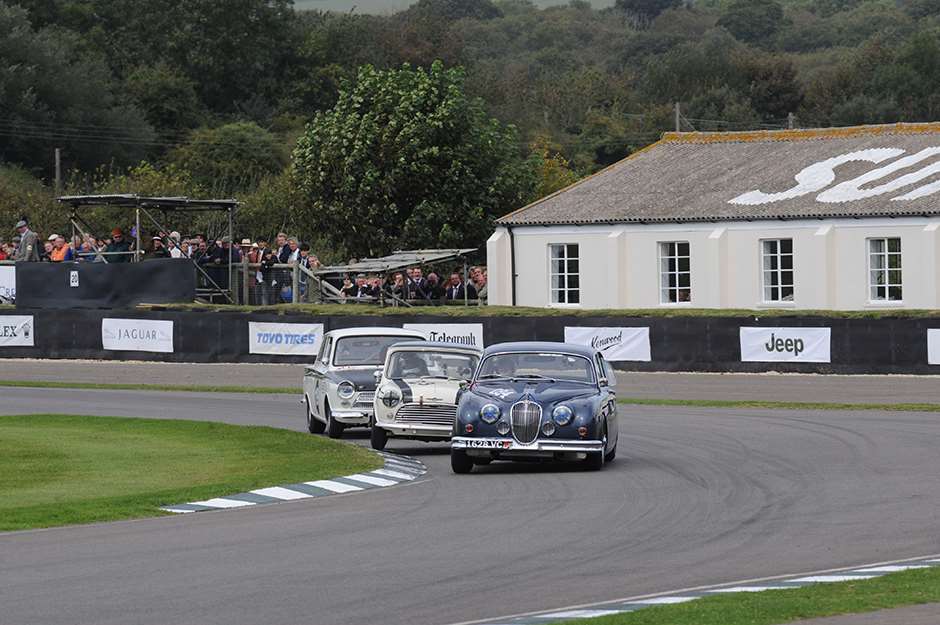 Is there a bigger Revival crowd favourite than the St Mary’s Trophy? After so many memorable moments over the years – from pirouetting Morris Minors to thundering Ford Galaxies, scuttling Cooper Ss to hard-charging Jaguars – it is doubtful.

The popular appeal is understandable. Apart from the cars – the sort our dads (or us…?) used to own – the two-part race features a host of special drivers, with invited current or former professional racers taking a turn behind the wheel in every car. The St Mary’s Trophy is where many of Goodwood’s most favourite people come to have fun. And win, obviously.

If you are not familiar with the race you can get a flavour of it from our video highlights from last year. And if as is likely you are familiar with the race you can still click here in order not to miss seeing again the delights of door-handle-to-door-handle racing in the most surprising collection of cars you ever saw on a racetrack. The 2014 race was memorable for many things… including a fantastic tussle between eventual winner Anthony Reid in a Jag MkI, an Austin A40 and an Alfa Giulietta. There is always a surprise in the St Mary’s Trophy. Who’d have thought an Isuzu Bellett would line up on the grid this year? Or that businessman and former ‘Dragon’ Theo Paphitis would use the St Mary’s Trophy to make his Revival debut as a racing driver!

Theo will be driving the Ford Anglia he has been racing this year after getting his race licence last winter. His teammate? Another Revival debutant, IndyCar race winner Mike Conway. That’s the St Mary’s effect for you: factory Toyota World Endurance Championship racer to Ford Anglia punter! Last year’s St Mary’s focused on the Fifties, this year it’s all about the Swinging Sixties. Entry limited to production saloons of a type that raced between 1960 and 1966 means that many of the St Mary’s all-time favourite cars will be racing. Such as: a brace of Ford Galaxies, five BMW 1800s, seven Mini Cooper Ss, five Lotus Cortinas, a pair each of Anglia, Alfa 1600 GTA and Jag Mk2, a Mercedes 300SE and a Fiat Abarth – not forgetting of course the Isuzu Bellett! Motor racing legends, underdogs, potential giant-killers, some classic (and not so classic!) racing saloons, and the closest racing you will ever see – four a side into Madgwick? You bet! The St Mary’s Trophy simply has it all.