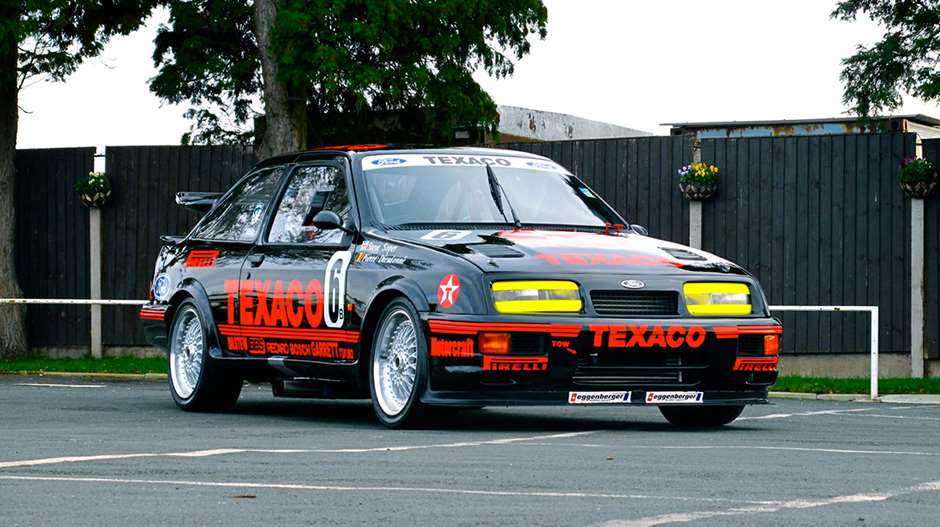 The impact of the Ford Sierra Cosworth on motor racing was so huge that it sent a shockwave around the world. As one famous piece of Australian commentary at the time went: ‘They said the car would break. It didn’t, it just broke the spirit of the opposition.’ So dominant were the Cosworths in the BTCC that before long regulations were being thought-up to rule them out of the series, but before that happened we were treated to a few years of lairy, 500+bhp, turbocharged action. The racing was almost always superb, and on the international scene the most recognisable cars were the beautifully-presented, Swiss-based, Eggenberger cars with their prominent Texaco backing. The likes of Steve Soper and Klaus Ludwig were often at the controls and winning handsomely, as in this clip from the 1987 ‘James Hardie 1000’ at Bathurst – part of that year’s World Touring Car Championship.

The car here is for sale at Silverstone Auctions’ Race Retro sale on 21st February 2015 and was effectively built as new just a few years ago. Incredibly, the body shell is thought to be the last known surviving right-hand-drive ‘909’ example in existence which was stored by rallying giant Malcolm Wilson, then an employee of his for many years before being dragged out in to the daylight to be built as an Eggenberger replica. All the right parts were used: Genuine RS Cosworth panels, a Ric Wood engine featuring the correct YB ‘200’ block, Garrett T3 turbo, AVO remote-reservoir dampers … The list goes on. Since its completion it has simply dominated wherever it has been raced, winning on its debut at Silverstone, at Spa and sewing up the Classic Touring Car title this year. The immaculate presentation is testament to the fact that it has apparently not been involved in its first racing incident.

So, what are we bid for this front-running classic tourer… £80,000? £100,000? How about an upper estimate of just £36,000! Road-going examples of standard cars in similar condition would go for more than that. The GRR office is in a state of extreme wantage.