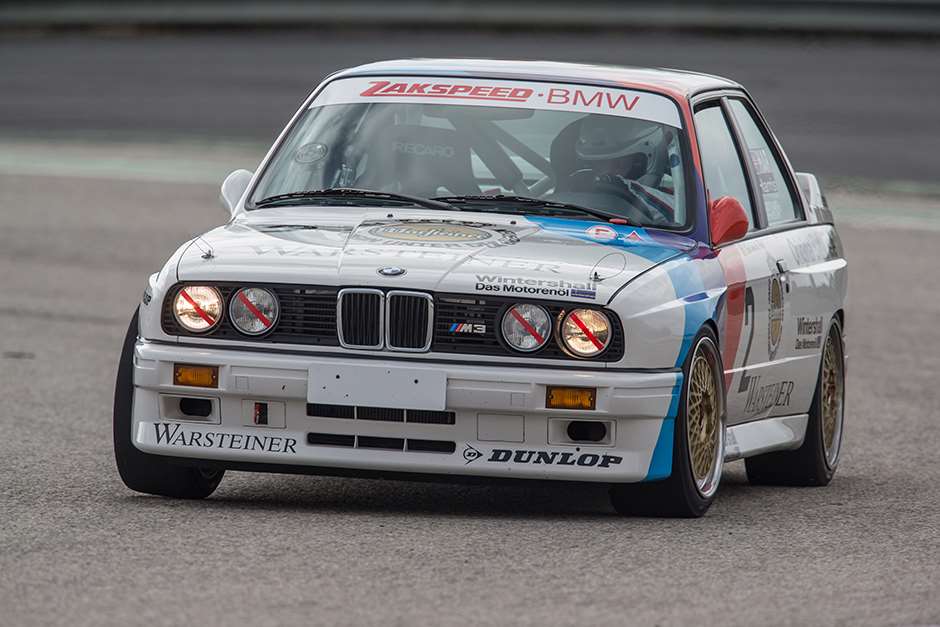 Three hundred horsepower is now a figure casually attributed to vanilla family estate cars, but back in 1987 it represented an unachievable quantity of performance – especially in the context of a 2.3-litre four-cylinder engine. The context was slightly skewed because I’d read in car magazines all about this quasi-unicorn, the E30 BMW M3, built for motorsport and hugely expensive, but for some reason running a gruff four-cylinder motor that didn’t sound as good as the cheaper 325i’s six, and needed thrashing to hell.

And the 300? That was in reference to the real race versions. ‘Capable of producing 300hp in race trim’ my predecessors eulogised. I simply couldn’t fathom how from just 2.3 litres. But it was true. I have only once before driven a version of BMW’s now famous S14 motor that produces a power figure beginning with a three. It wasn’t that healthy, and I’m told that such outputs when operating correctly require a shift in personality to almost two-stroke narrowness of powerband, but that with the correct gear ratios and a slick shift, the result can be addictive.

“The balance is undeniable though, within a few laps you’re cutting slides in the first four gears and, best of all, this feels like a machine that needs some slip to produce its best lap times”

My tutorial in peaky S14s comes in the form of the ex-Eric van der Poele 1987 E30 M3, one that was part of the Belgian’s winning DTM campaign. BMW is currently producing some fine looking M cars, but it is unlikely the boxed-arched E30 will ever be beaten, especially when it’s running Hockenheim ride-height and gold BBS rims. Mouth-breathing is an embarrassing side-effect of being in this car’s presence – you just gawp at its perfection.

The cabin is even more appealing. A simple three-spoke Italovanti wheel – its surface polished and worn, three metal pedals and a large gear lever crowned with a big dollop of nylon. There are some clocks and a few switches, but not much else, just as well because the driving experience keeps you busy. It starts more easily than you’d expect of a high-compression four, cammed to within an inch of its life. The rev-limiter is set to 8500rpm, but were the BMW Museum happy to trade in much more frequent rebuilds, it would happily run to 9200rpm. Given how valuable S14s are becoming now, you have to remind yourself how disposable they once were.

The steering wheel seems a little too high, and the unassisted rack is predictably heavy rolling out of the garage, but the package somehow feels right. Throttle response at idle is zip-tastic, but the moment you get it rolling your inner-spreadsheet suggests a torque figure of around 35lb ft at 4000rpm. Being a respectful rookie, you shift early into second at 5000rpm exiting the pits and it bogs so badly you have to dip the clutch a little to avoid it kangarooing and stalling! That’s the first lesson of the hyper-frenzied S14, thrash the hell out of it. Then it comes alive. The usable power band is minute, from 6500-8500rpm is the sweet spot, and in that small window of crank speed lies one of the most satisfying engine and gearbox experiences imaginable. By modern standards it’s not very quick, but keeping it on the boil, reveling in that perfect gearshift and whooping at the hardening intake noise when the cam comes good is up there with my best motoring experiences.

Finally here’s the chance to see what an E30 M3 chassis feels like working with a sensible power figure. The steering is far less engaging than the street car’s, but then removing tread blocks always has that effect. Turn-in is sharp and the initial grip level is just fine, but the car is very stiff and deflected by small bumps and you take a pounding in the seat. The balance is undeniable though, within a few laps you’re cutting slides in the first four gears and, best of all, this feels like a machine that needs some slip to produce its best lap times. When the rear breaks away it does so predictably and easily, you just roll an armful of lock into the slide and keep the throttle pinned. The only situation to avoid is a fully-compressed, already poinging-over-bumps-oversteer: that can be a snappy handful to contain.

Fundamentally, this is a transparent, simple driving device. It stops well, it goes where you point it – it has few enough vices to give a driver immense confidence, but certainly running this stiff set-up, enough spikiness to keep you concentrating. It’s fast too: keep it in the zone and the lap times are impressive.

Race organisers are trying to incorporate this late-80s tin-top heyday into events, but the grids are still disappointingly small. Yes, the values of the real cars are strong, but ratty road-spec E30 M3s are available for mid £20k and they’d make for an amazingly absorbing race car. Modern enough to go fast, old enough to be simple to operate and run, and not punish the driver for letting the back move around.

I have one currently in gravel rally car specification; this experience has made me itch to slam it on the deck and fit slick tyres.