The LEC CRP1 may be one of Formula One’s forgotten machines – its best result was 13th at Zolder having briefly led the race – but it’s one that has strong links to Goodwood. LEC was based locally in Bognor Regis, and much of the team’s testing took place at the circuit. The Festival of Speed will see it turn a wheel in anger for the first time after 35 dormant years.

LEC was a small, against-all-odds kind of Formula One team that couldn’t have existed much later than the 1970s. Finance was provided by Charles Purley, owner of the Littlehampton based refrigeration company of the same name, and the CRP1’s bodywork was formed using fridge door shaping machinery during quiet evenings. 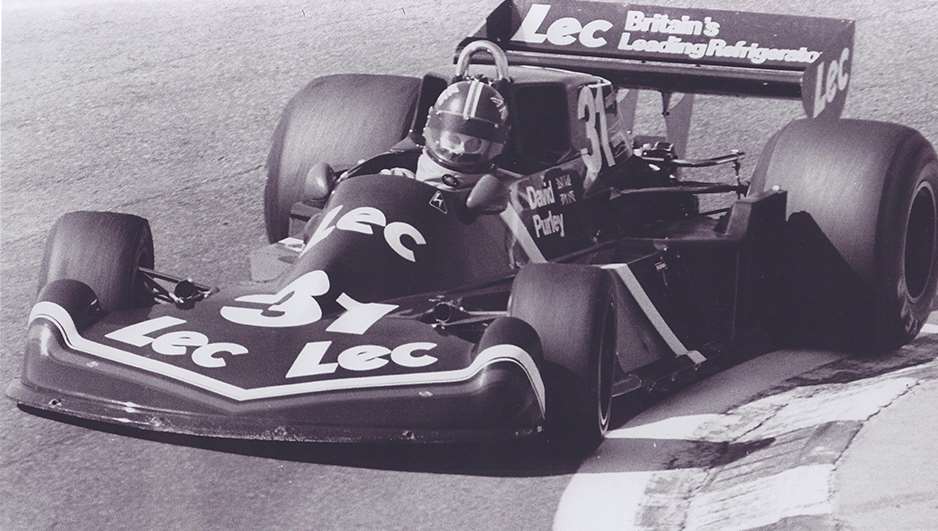 Prior to the 1977 season, LEC had entered the Formula One championship in 1973 with a second-hand March chassis, and had been successful in F2 with drivers including then-up-and-coming Derek Bell and John Watson.

The reason the team led the 1977 race at Zolder was only by dint of the fact it hadn’t perfected the art of a pitstop. Says team manager Mike Earle: “It was one of those wet/dry races. We stayed out too long on wet tyres – we should have come in for slicks much earlier, but we really didn’t know how to do a pitstop, because we hadn’t had to before. So to save ourselves the embarrassment of taking ages, we just left him out and hoped it rained again. The upshot of that was that because others stopped, David ended up leading. Eventually he did have to stop, at which point he turned the engine off – which he shouldn’t have done. Our luck wasn’t in because the starter motor jammed, so it took a while to get started.”

The car was driven by Purley’s son David, a passionate racing driver who sadly lost his life in a plane crash in 1985, aged 40. “When the race was over, he came over and said ‘I had a good battle with that bloke in the red helmet – he was getting pretty annoyed that he couldn’t get the lead off me’. We explained to him that ‘the bloke in the red helmet’ only happened to be Niki Lauda. ‘Oh right,’ David said. He was oblivious to things like that. He didn’t care who he was racing, he just loved to race.”

Purley will always perhaps be best remembered for his heroic efforts to save the life of his friend and fellow racing driver Roger Williamson at Zandvoort in 1973. Williamson’s March overturned and was engulfed in flames. The impact didn’t kill Williamson, but he was trapped in the car. Purley stopped to rescue him, but received no assistance from the marshals. Mike Earle: “He reckoned with even one more person, they could have rolled the car over and got him out – Roger was still conscious at the time. Roger’s death badly affected him.”

At the Festival of Speed, Joe Twyman will take the wheel. It’s an opportunity he relishes: “The car has been through a complete restoration process since being bought from the Purley family and taken out of the Donington Collection around two years ago. I can’t wait to have a go on the hill in it – the aim is to reach the Sunday shootout and break 48sec, which I think should be achievable for the LEC.”

The first time the CRP1 turned a wheel in testing was here at the Motor Circuit in 1977; we’re looking forward to seeing it return to Goodwood to take on the Hillclimb.

Tickets for the Festival of Speed, and all the other Goodwood events, are available here.