Best of British: A day with Ten Tenths and Nick Mason's 'curious muddle' of classic racers Today his ‘non-collection’ numbers between 35 and 40, depending on what’s coming and going at the time. They all get driven, and most are raced; getting an airing at Revival in 2014 were Maserati Birdcage, Frazer Nash Le Mans Replica, AC Ace and Maserati 250F.

His Ferrari 250 GTO – the most well known (and valuable) car in Nick’s ‘muddle’ and another machine he has owned since the late 1970s – had Revival off this year, the focus being on the Maserati centenary. But the 1962 Le Mans car (it came third that year) has still been raced every year of its life which is incredible given that its value runs into the tens of millions.

With cars such as these, and a company, Ten Tenths, dedicated to keeping them in peak operating condition, it is true to say that any serious historic race meeting without a Nick Mason car is just a little incomplete. His cars are among the best-loved, hardest-used and most-often seen in the entire classic car world.

Thankfully things are set to continue like that, too, though Nick is semi-retired from racing and enjoys road rallies as much as circuit racing. So, more endurance events?

‘Yes, but ideally not so much endurance. More touring from one fine hotel to another,’ he admits. ‘One of the most successful cars for me recently has been the Ferrari 250 MM because it is so usable. I parted with the Enzo Ferrari because there is a limit to what you can do with supercars. Whereas a nice old tin-top like the MM… I have taken it on two Cornish road rallies and it’s been great. 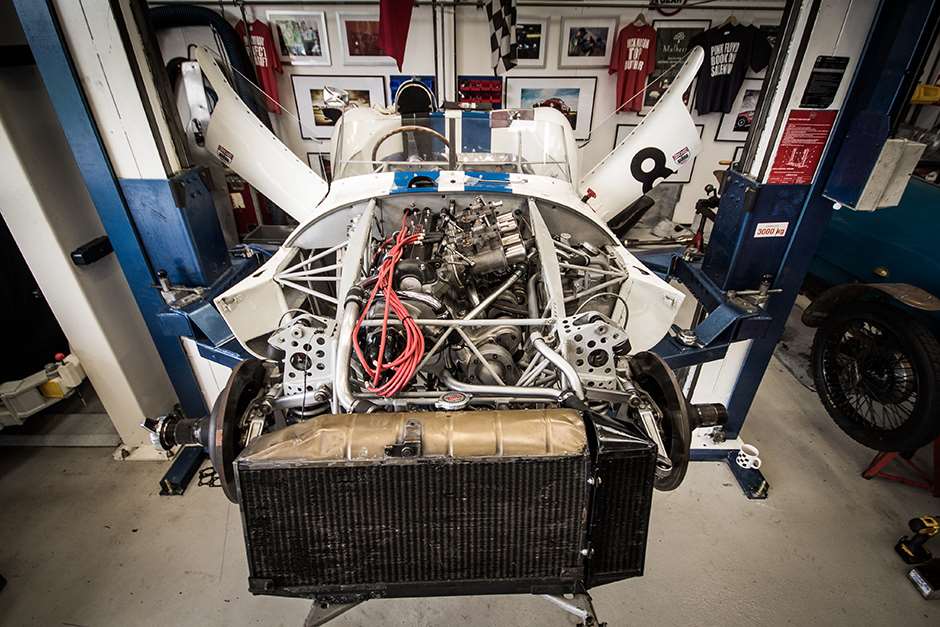 ‘Something like a Rolls-Royce Silver Ghost would be good, too. A bit more suitable for my age (he’s 70 – ed). I certainly find myself drawn more to older cars than newer ones.’

Perhaps, but that hasn’t stopped him recently buying a LaFerrari. Does he have it yet? ‘No, not yet. I have said to Ferrari I don’t want it for the winter. They are going to build it for me next year.’

When it arrives it will live with the rest of the Ten Tenths cars in a sprawl of remote buildings Somewhere In Southern England. Goodwood Road and Racing put on the blindfold and was led inside to see for ourselves this ‘curious muddle’ and meet the people who look after it…

Ten Tenths moved out of central London to the country 10 years ago. The contrast to Kings Cross is dramatic. The location is rural, very, the views are far-reaching and the peace and stillness take you aback.

The buildings are unfussy and workmanlike, with nothing outside to indicate their contents. This place is not set up for visitors. Visitors are not really welcome, for obvious reasons.

The main door opens straight on to a workshop with two hoists and enough room for around 10 cars. Up some stairs there’s a large office and meeting room, the shelves, tables and cupboards groaning under the weight of racing and automotive memorabilia of every description.

Off the workshop are some machine shops and a clean room adjoining a large space full of cars parked side by side, nose to tail. This is where most of Nick’s 35 or so cars live; one of them will have to move if the LaFerrari is to join them. It is crammed.

With? It’s a well documented list but suffice to say it is an exceptional private collection, mostly (but certainly not all) racing cars, and more Ferraris than anything else. 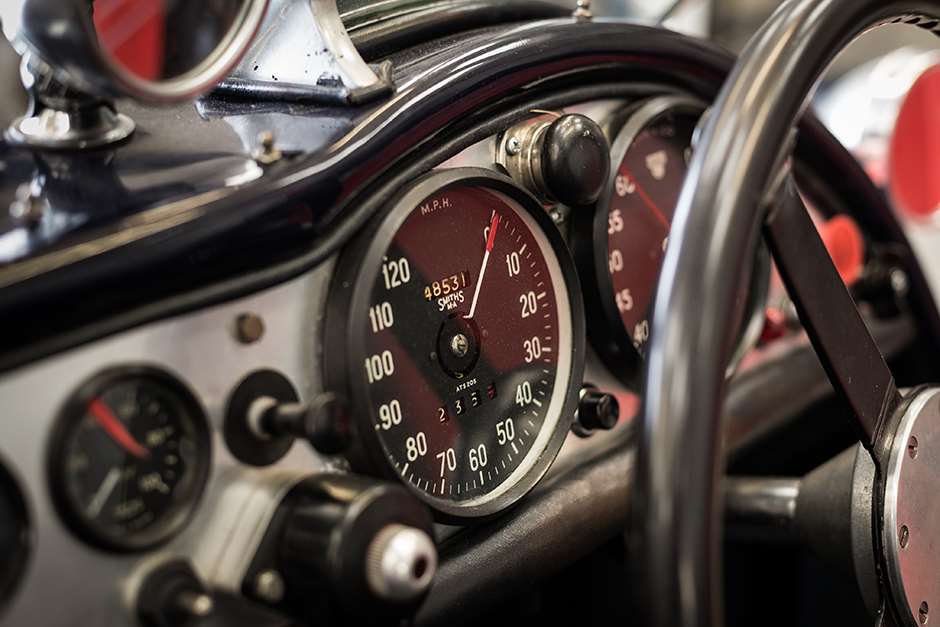 Like the F40 he drove (raced?) back to the UK from Maranello with David Gilmour (they had bought an F40 each, the first ones in the UK). The 512 BB Nick has raced at Le Mans. The 512S driven by Derek Bell as the camera car during filming of Le Mans the movie. The ex-Carrera Panamericana 250 MM Nick has been touring around Cornwall in of late. A factory competition Daytona. A 599 GTO. There’s one prancing horse missing: the 250 GTO is elsewhere today.

An Aston Martin Ulster is remarkable for being the original 1935 Le Mans car; its presence is all the more remarkable because there are two other Ulsters, LM17 and LM21, alongside it.

There’s the blue Bugatti Type 35 that Nick gave his wife Annette as a birthday present. And a Bugatti Brescia. Over there is the McLaren F1 GTR. Somewhere is a Toleman F1 car. There’s an AC Ace, an Austin Seven and, Nick’s latest acquisition, a 1929 Morgan Three Wheeler. Looming above them all is the 1930 4.5-litre Bentley in which Nick’s father, a cinematographer for Shell, used to drive the Mason family to Silverstone, race, and then drive them all home again. So that’s where Nick gets it from.

Go to work on a skateboard

Every car gets driven, says Charles Knill-Jones who has worked with Nick for 20 years and has responsibility for looking after the collection. It’s handy that he lives at the top of the lane, close enough to get to work on his skateboard.

Bugattis are Charles’ thing, particularly the Type 59. He has restored several and, for the first time, raced one at Revival in 2014. His own Bugatti preparation business, Tula Engineering, shares premises with Ten Tenths. 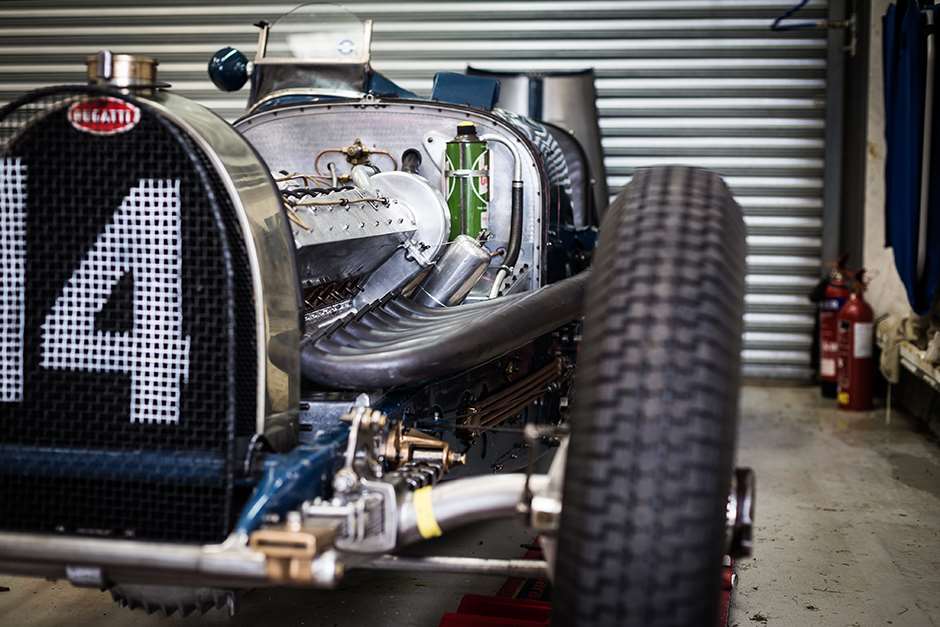 Cars in Ten Tenths’ collection used to be hired out to film companies for ads and suchlike but it doesn’t happen much these days. ‘Production companies are so flighty,’ says Charles. Now it’s all about looking after the cars and managing the historic racing – about 10 events a year, with some, like Revival, requiring six cars.

They are made ready for regular drivers who include not just Nick but also his wife Annette, daughter Holly, son-in-law Marino Franchitti and long-time friend, the racer and journalist Mark Hales, among others. It is all very much a family affair.

Next event? That’s the London to Brighton in early November. The car for this will be the collection’s oldest, a 1901 Panhard et Lavassor. Says Charles: ‘We adore the contrast of preparing the racing cars for Revival in September, then getting out the Panhard and making it ready for the Brighton run. The technology is so different it’s refreshing.’ 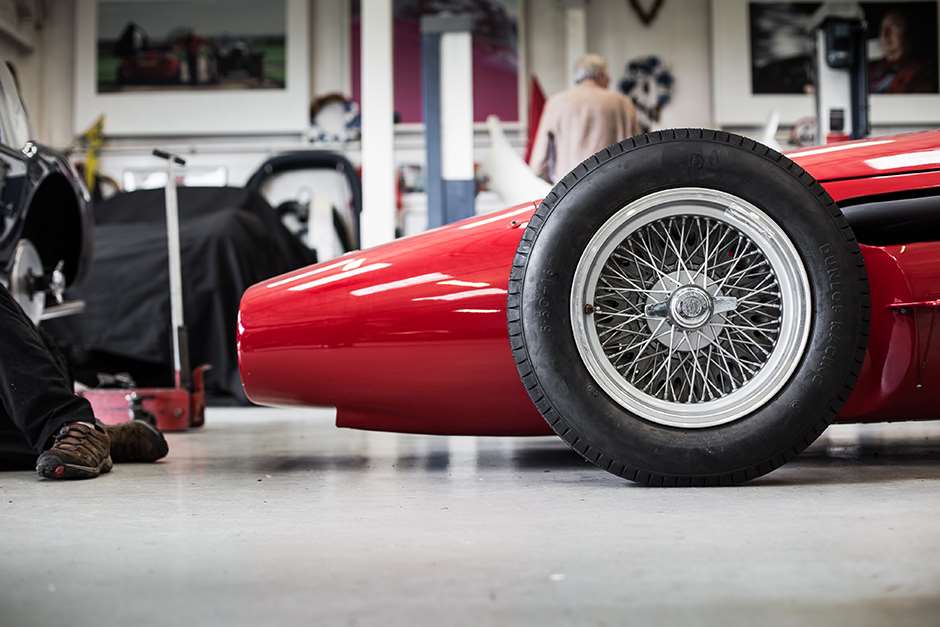 It must require a certain amount of readjustment working on cars whose technology is 100 years apart? The secret, says Charles, is to put on the ‘thinking cap’ of the era in which the car was made. He makes it sound easy; perhaps for a material science graduate who joined the VSCC age 15 it is.

Does Nick have a personal favourite among all the cars? ‘He always says that would be like choosing his favourite child. One of the cars he most likes to drive is the Maserati Birdcage, while the car he has raced the most is probably Aston Martin Ulster LM21, which he has owned since he was in his 20s.’ LM21 in fact gave Nick his first and so far only win at Revival, in 2009.

In the trophy cabinet alongside the Goodwood cigar for the ’09 win is what Charles says is Nick’s most special racing possession – the Index of Performance trophy from Le Mans in 1979, when Nick and his Dorset Racing team finished second in class.

All this and a new album too

Does Nick get hands-on with his cars? How will he go looking after his 1929 Morgan which, he tells us, he wants to do all the work on himself?

Charles Knill-Jones says: ’He will run around in it until it breaks which it inevitably will, and then instead of bringing it to me to fix he will fix it himself. That’s the plan anyway. Actually he is very practical, and has in the past prepared his own cars for racing, when he has had the time.’

There hasn’t been much of that of late, with Nick working on the new Pink Floyd album, The Endless River. The band’s first new release since The Division Bell 20 years ago, it’s due out on 10 November. 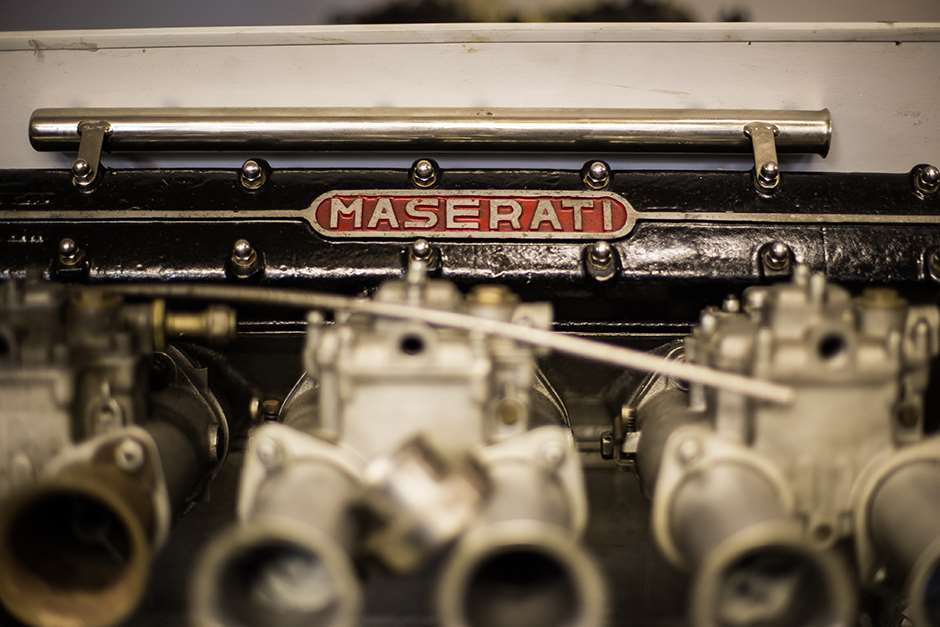