A highly anticipated new addition to the 73rd Members’ Meeting programme is a Formula 3 single-seater race that’s set to recreate the slipstreaming battles fought by aspiring F1 drivers in the late ‘60s.

Making its first appearance at modern-era Goodwood, the ‘screamer’ class, as it was affectionately dubbed thanks to the tuned, high-revving, 1000cc Ford Anglia engines that were de rigueur, pitted scores of future stars against each other in domestic championships across Europe and, if talent and budget stretched, overseas against continental opposition.

In that seven-year period, classic, British-based manufacturers Brabham, Chevron, Cooper and Lotus cleaned up, thanks to a mixture of their practical-yet-potent engineering skills and the talent of the aspiring Formula 1 aces, who chose to use F3 as a stepping-stone to stardom. A quick glance at the sort of names that appeared on the British F3 winners’ list during that period proves the point: Jackie Stewart, Peter Gethin, Derek Bell, Emerson Fittipaldi, Dave Walker, Carlos Pace, Jackie Oliver, Tim Schenken, Reine Wisell and Mike Beuttler all made it to Formula 1 – albeit with varying levels of success.

Why was the category so popular and, in each of the seven seasons, oversubscribed?

Tony Trimmer, who won the MotorSport/Shell championship in 1970, the final year of the one-litre formula before 1600cc engines took over, is clear about its popularity: ‘The one-litre era was such a success because it was so economical,’ he says. ‘The Anglia MAE [Modified Anglia Engine] engine was brilliant, and so easy to work on. It revved freely and was reliable – it only needed one proper rebuild each year.

‘And, significantly, it was the best way for a privateer driver, like me, to compete against works entries, whether it was Brabham, Chevron or Lotus. Its great selling point was that money couldn’t buy success. If you set up your car well and you could drive it properly, you had an equal chance.

‘The appeal of that was huge: there were up to 100 cars in Europe; you could go to a circuit you’d never seen before and compete on equal terms.’ Fellow Brit Derek Bell, who also raced in F3 during that time, after starting his career in a modest Lotus 7 at Goodwood, his local circuit, agrees.

‘It was a hell of an era,’ he admits, ‘a real sight to behold, especially at places likes Goodwood and Silverstone – the really fast circuits. All the great drivers came through F3, particularly the ‘screamer’ era that I was lucky enough to race in during the mid- to late-1960s.

‘Every country that was worthwhile, certainly in Europe, had a series,’ Bell continues. ‘It was a chance to race competitively in your own country, but if you were really serious, or had more hope, you did the overseas races. Anyone could do it. Engines were about £600 – and you had the pick of a Lotus, Cooper, Chevron, Brabham or Tecno to put it in.’ Bell reckons that the simple and cheap nature of the cars added to the appeal.

‘They were so simple to work on,’ he says. ‘Set-up tweaks were minimal but you could make a difference to the car if you knew what you were doing. People modified their engines; I started with about 90bhp from a 997cc Ford Anglia engine and that rose to 105bhp when Cosworth got involved. It was all about getting the air intakes to work to get the best flow through the 35mm restrictors we ran. As far as the chassis was concerned, you could alter the rollbars but not the shocks or anything like that. It was so simple and so effective.’

Mention his glory days of 1970 and Trimmer gets all nostalgic. And it’s easy to see why: it’s a recipe that gets drivers’ and fans’ taste buds going, even now.

‘Money couldn’t buy success. If you set up your car well and you could drive it properly, you had an equal chance.’

‘One of the most satisfying races of my career – in fact, I chose it for the ‘Race of My Life’ in Autosport a few years ago – was the final one-litre Monaco F3 race in 1970, which I won,’ he adds. ‘I’d joined Brendan McInerney’s Race Cars International for that season from Willment. I got to rebuild and then race Bev Bond’s crashed BT28 and it was a great season.

‘Winning Monaco was incredible, but it was a close-run thing. I’d raced at Magny-Cours the weekend before and a valve spring had broken in the engine. We found a local garage when we got to Monaco and rebuilt it. I had to practise with the repaired engine until engine tuners Holbay brought a spare down.

‘I went on to win the MotorSport/Shell championship – and finish second in another series after the finale was snowed off so I couldn’t catch the points leader – in 1970, the last year of the one-litre formula, so it does feel like I made my mark permanently on a British racing success story.’ 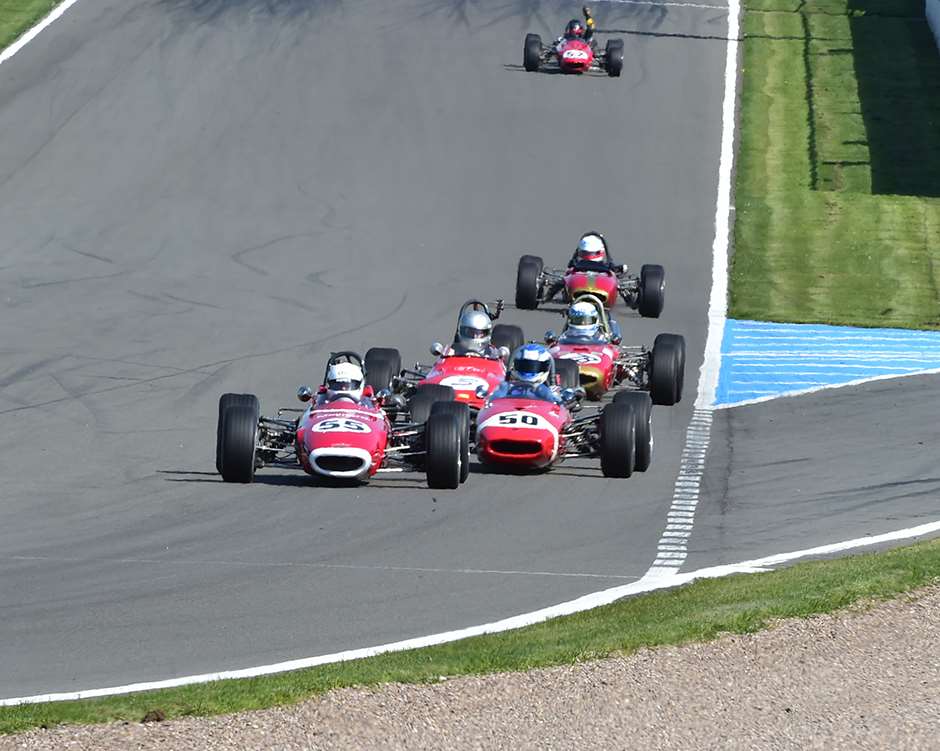 Bell remembers a few hiccups along the way, with some high praise thrown in for good measure.

‘I started off in the Lotus 41 – and you’ll see the car at the Members’ Meeting. I was seduced by the glamour of Lotus, which was stupid. Once I got in the Brabham I started winning straight away. I phoned Jack Brabham once and asked him to look at my car to check it was OK.

‘Imagine that now: a young racer asking a multiple world champion, who’d built his own cars and beaten the regulars, to sort his little F3 car! Anyway, Jack got in it, came back in after a few laps and said, ‘you’ve got it working just fine, Derek!’ So I knew there was nothing wrong with the car!’

And, like Trimmer, Bell’s F3-career highpoint came surrounded by the glamour of the Principality.

‘It’ll be amazing to see all those cars screaming round Goodwood at the Members’ Meeting, many of them with fantastic history. I can’t wait to see them all going for it – it’ll bring back superb memories for me.’

‘The big prize for wannabe racers trying to make it in F3 was the Monaco Grand Prix support race. It really was a big deal. It was held two hours before the GP, so everybody from the F1 teams was watching out for the next big star. There were something like 60 cars, it was incredible – certainly the biggest race in Europe. One of my best races came there in 1967 when I finished third behind the two works Matras of Henri Pescarolo and Jean-Pierre Jaussaud. I was best Brabham driver, ahead of a horde of other BT21s, and that really helped my profile.

‘If you survived it, because it was pretty dangerous with all those young guys charging round week in, week out, and you’d done well you were OK. It was a bit like going to war!’

‘Derek’s right,’ says Trimmer. ‘If you got it right, it was very rewarding. It’ll be amazing to see all those cars screaming round Goodwood at the Members’ Meeting, many of them with fantastic history. I can’t wait to see them all going for it – it’ll bring back superb memories for me.’

Take Trimmer’s and Bell’s advice: make sure you’ve got a good vantage point when the pack of screaming F3 cars, most of them with fabulous provenance and many of them rebuilt especially for this ‘reunion race’, heads out on track.

It’ll be fun, but fierce, just like all good wheel-to-wheel combat around Goodwood.