A new Jaguar Le Mans car... Not such a sketchy idea?

A return to Le Mans by Jaguar is an enticing thought… and it seems that Jaguar itself isn’t immune to a little dreaming. A future Le Mans racer was just one of the concepts sketched out during the closing evening for London’s Clerkenwell Design Week, thus giving us a chance to see how Jaguar’s designers are thinking – pending any official statement of Le Mans intent! 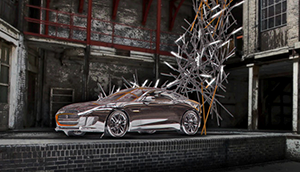 Jaguar is the headline sponsor of the Clerkenwell event, which celebrates all aspects of design. The F-type formed an important part of its display, with an F-type sculpture that featured a ‘totemic’ LED lamp, and another with a unique exterior wrap. For the closing night, Jaguar design director Julian Thomson oversaw five of his design team as they worked through the Le Mans car brief provided by Royal College of Arts director Peter Stevens. Audience members chipped in with their suggestions and the design team made them a reality. Well, a two-dimensional reality.

As well as the Le Mans entry, the evening also generated designs for a new XJS and a re-rendered XF. The sketches are what designers regard as their ‘expressive ideal’, and production versions are ‘worked’ back from that point, we’re told.

But it’s the Le Mans car, rather than those with any production possibility, that has lit our fire. If the idea of a Jaguar LMP car is (sadly) a little far-fetched, a more likely appearance at La Sarthe may come in the form of a GT3-spec F-type. There was plenty of speculation about that last year, and we haven’t given up hope of Jaguar doing battle with the Porsche 911 on track as well as in the showroom.

Come on Jaguar, let’s get the Union Flags waving at Le Mans…