After Tokyo, the eyes of the motor industry turn to California and the Los Angeles Auto Show. Traditionally it’s a slightly offbeat show – and this year there’s an offbeat British star ready to steal the glory…

When Land Rover presses the button on the Evoque convertible at the show on November 18th it will be hoping to let in more than just Californian sunshine. The windiest ever Range Rover will be aiming to blow away the memory of two decades worth of convertible SUV flops.

Proper off-roaders might have started mean and roofless – and a few, like Jeeps and Jimnys, have stayed that way – but ‘lifestyle’ SUV convertibles have thus far had a very stormy ride. Beloved chiefly by concept car designers and after-market customisers, for a while the genre was known as ‘off-roadsters’ but thankfully that didn’t catch on. Trouble was, nor did they.

All of which means the LA show this year is going to be a big moment for Land Rover and ‘the world’s first luxury compact SUV convertible’ (LCSUVC? ed). We know a little about what the topless Evoque looks like – from the concept and series of ‘wire-frame’ teasers parked on London streets earlier this ear – but it’s LA where we will see it all shiny and ready for the showroom. Sales begin in the UK next spring, when it will be billed as ‘the most capable convertible in the world’.

But then, so were they all. What will make the Evoque ragtop different? Quite a lot it appears including the fact that the model is already as much practical and capable alternative to coupes like the Audi TT as it is SUV. On that basis doing a ragtop Evoque is a surely no brainer.

So confident about its chances are we in fact that, ahead of the car’s official unveiling next week, we don’t think it is tempting fate one bit to take a wry look back at some the convertible SUVs that preceded it – and which weren’t quite the breath of fresh air their makers expected… 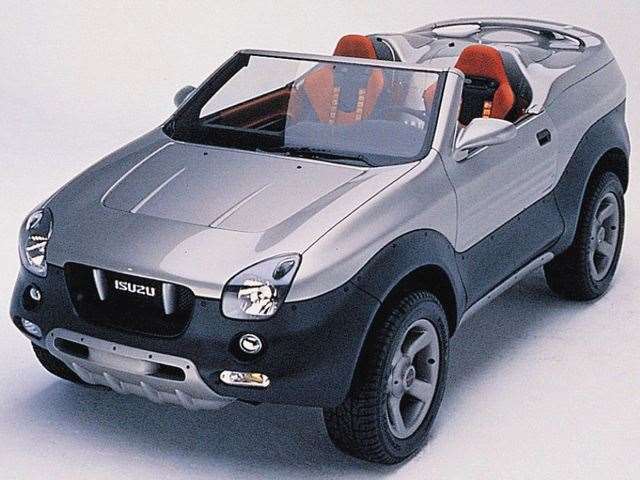 The alien-looking but prescient two-door Vehicross (the work of Brit designer Simon Cox, now penning new Infinitis) is well enough remembered but the convertible version that followed it is certainly not. And we can’t blame Simon for that. His work – a bold transformation of Isuzu Trooper into sporty SUV coupe, not the easiest brief in the world you’d have to agree – lost its head on the orders of Isuzu in the US. The result, which made its debut at, you guessed, the Los Angeles show in 2000, was interesting but not universally acclaimed. As a cabrio, the one-off Vehicross came with roadster styling, two seats only, not much luggage space and no top. Its moment of ‘fame’ came later in a starring role in the movie, Mission to Mars – almost as much of a flop as the car. It’s believed to reside today in the Petersen Automotive Museum in LA. Ten years after the Vehicross and the LA show gets another supposedly glamorous take on the convertible SUV. And this one made production, lasting in fact until 2014. Not that people even in California were queueing up to buy it. Like others, before and since, Nissan claimed it was the world’s first and only all-wheel drive crossover convertible; customers claimed it looked weird, was expensive and had nowhere for luggage. In its eulogy, Car & Driver said: ‘Like that creepy uncle whose lap you sat on as a kid, the CrossCabriolet was both a fixture of its time and something to be avoided.’ Perennial whipping boy and habitué of ‘worst cars ever’ lists the world over, the X-90 really didn’t know whether it was coming or going, and not just on the styling front. In replacing its (okay-ish) Samurai 4×4, Suzuki thought that a two-seat, targa-top, four-wheel drive with a boot was just the ticket. Unsurprisingly not many people agreed – they didn’t even like it in Los Angeles – and production ceased in 1997 after just two years. Red Bull found a use for the leftover cars: mounting a giant can on the roof and using them as promotional vehicles. Bravely in 2013 Suzuki reprised the approach with the X-Lander convertible concept based on the Jimny. At least that didn’t look like a hat. While designers love convertible crossovers, product planners generally don’t. Which explains why at the Los Angeles show in 2007 the Cross Cabrio (an angry convertible? – ed) garnered its fair share of oohs and aahs but appeared six months later as the Audi Q5 – complete with all its pillars and roof. It was only ever a teaser for the Q5, though some commentators fell for its ‘showroom ready’ finish and Audi’s assertion that it offered the ‘genes of a dynamic soft-top convertible with the all-round qualities of a fully-fledged SUV’. What’s not to like? They were obviously not product planners. Even so, in a Q5 Cabrio Audi would surely have the closest rival to the new Range Rover Evoque. 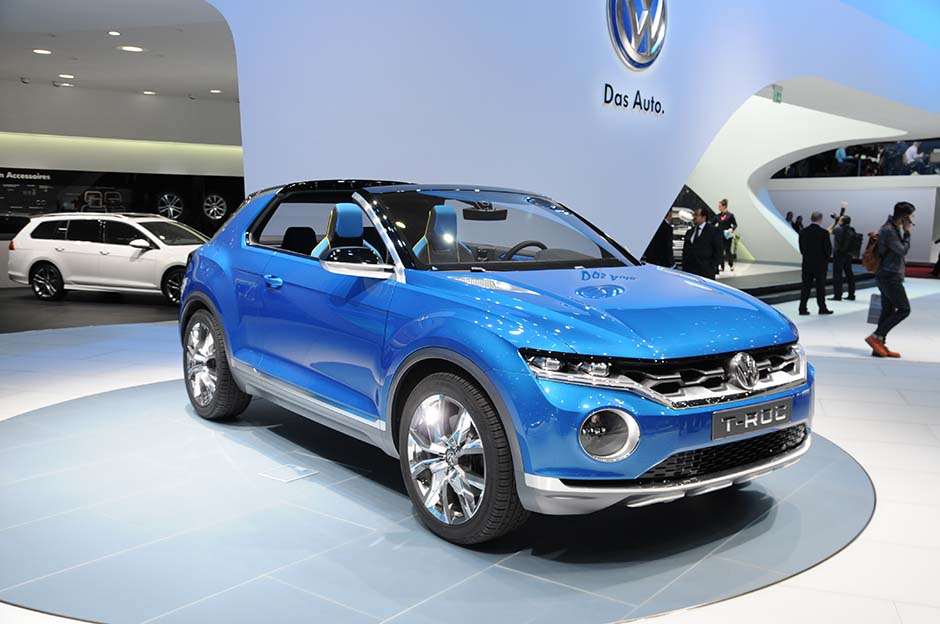 VW certainly needs a smaller SUV in the range but does it need a three-door targa-topped SUV? Probably not. Even if it does come with roof panels that ‘with just a few flicks can be taken off and stored in the boot’. Echoes of Suzuki X-90… But as a motor show snappers’ magnet the T-ROC did its job well at its debut last year at the Geneva show. More effectively probably than if it had been the real deal – after all it’s not difficult to imagine what a Golf-family mini Tiguan will actually look like. A convertible? Unlikely.

There you are then, not a massive amount for the new Land Rover to beat. What it will undoubtedly be, is the world’s first successful luxury compact SUV convertible. Which means that in a few years’ time the market will probably be stuffed full with them!