On a recent trip to Spa Francorchamps to witness the superb Spa Classic meeting, the GRR team was strolling through the vendor’s section of the paddock when we were inexorably drawn towards a stand which displayed a series of paintings of celebrated engines.

The artwork was stunning as you can see. The classic motors from Aston Martin, Maserati, Ferrari, Chevrolet, Jaguar, Rolls Royce and others were rendered beautifully and in a playful manner, but with no lack of detail. In fact we were so taken by the artist’s style that we didn’t notice the engines were painted not on canvas, but sheets of steel! The artist in question is a French lady (who speaks impeccable English, by the way) called Sandrine Blondel. We asked her where she got the idea to paint on steel. ‘My mother and step-father lived and worked in Africa when I was young as tourist guides and they had a fleet of about 20 Land Rovers, so I soon became familiar with them working on engines’ she tells us. ‘But I’m a terrible mechanic. I’ve never done anything to an engine!’

Despite her apparent lack of mechanical nous, Sandrine captured the fascination of petrolheads in the Spa paddock with her work. Being paint-on-steel though and with a clear coat on top, it’s a classic case of having to see the work in person to appreciate the texture of the material. It’s beautiful, so we’ve selected a handful of Sandrine’s pieces to share with you here. ‘Metal is the perfect match between the subject and the medium’ she explains. ‘I’m going to phase-out steel and use more aluminium sheet for my work, though.’ 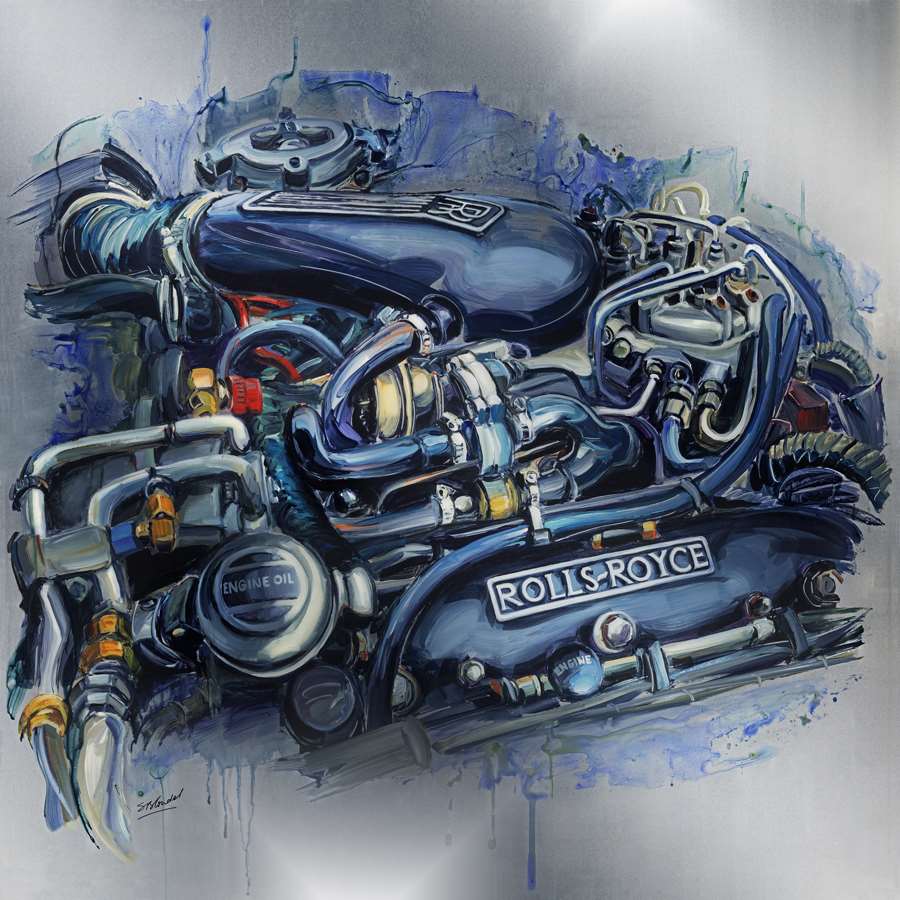 We were keen to find out which engines Sandrine, as someone who understands little of how an engine works, likes to paint from an artist’s point of view. ‘Well, one of my favourites is actually the first one I did, which was from a Rolls Royce Corniche. I also enjoyed painting the Chevrolets with their big air filters, the Ferraris and especially the engine from a Lamborghini Espada. So beautiful. The engine is the heart of the car. It’s organic… like the insides of a human body.’

Although she’s wanted to attend the Revival for some time, sadly Sandrine cannot make it this year. However she will be at the second annual Chantilly Concours D’Elegance in September and confirmed to us today that she’ll have a stand displaying her work at next year’s 74th Members’ Meeting.

As for the GRR office, of the work shown here we’re most taken by the Maserati and the big block Chevrolet. Assuming none of the motors here is quite doing it for you, what would you commission Sandrine to paint?