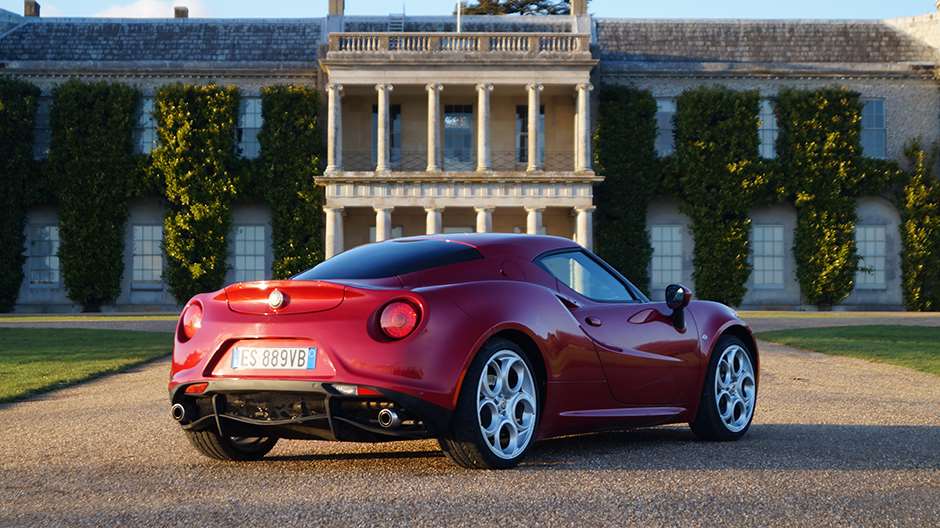 To Slough to pick up the 4C. The little Alfa is sitting waiting for me in front of the glassy edifice that is home to what we have now to call Fiat Chrysler Automobiles. Slough doesn’t quite have the same ring to it as Milano does it?

Question is, does 4C have the same ring to it as Giulia, Spider, Alfasud, GTV or any of the other real driver’s cars with which Alfa has illuminated motoring in the past but which have been conspicuous by their absence now for years? This is the same car that was on the telly on Sunday. Top Gear raced it against a quad bike/jet ski hybrid on Lake Como, which was good, as far as it went. I am going to see if this eagerly awaited new Alfa actually floats. At around 900kg it is light enough.

And then if we don’t sink, and I can navigate the currents in North Hampshire and West Sussex, I will moor up at Goodwood and hand the keys to a new skipper, Anthony Reid, who will perform in it for the cameras on the hillclimb, the same bit of black-top where the 4C first roared in anger in the UK at FoS last year.

You will be able to see Anthony’s Hillclimb Roadtest on the website soon, but for now it’s brief first impressions of a Slough-to-Goodwood cross country dash. And yes it was wet. In fact in places the route I took was under water.

One thing that is soon apparent about the 4C is that it is not the perfect motorway car. So instead of turning left on the M4 I headed towards Reading, hung a left for Basingstoke and then to some favourite roads: the lovely twisty “high risk route” down to Alton, a bit of A32, over the top of the downs to Steep and Petersfield, into South Harting, left on the Chilgrove road to Lavant and then to Goodwood. These are roads, I am sure, familiar to many people reading this. It’s also a great drive for a small, light and boisterous thing like the 4C. Even when the road is awash. So who needs a jet ski when you have the 4C?

First impressions. It is a very pretty car. Thumbs up from white van blokes within a quarter of a mile. An appealingly compact car, too, if a little on the wide side. Not too difficult to get in and out and once in, a good driving position and okay room where you need it: in the footwell, between knees and steering wheel and above your bonce. The seat goes back far enough for drivers over 6ft, and the flat-bottomed wheel has plenty of adjustment too. Easy to fathom switches and central read-out. Logical gear arrangements: push buttons down low on the centre panel for neutral, first, reverse and automatic, and paddles behind the steering wheel (to which the paddles are fixed). A simple switch for driving modes: all-weather, ‘natural’, sport and race. In the absence of a marine option I go for natural.

You set off comfortable and undaunted, confident apart from one nagging doubt – that it would be very easy to lane-change straight into rubbernecking white van blokes simply because you had no idea they were there. Over the shoulder view (and even the rear view) is not good.

All of which melts away when you drive. The immediate and biggest impression the 4C makes is just how engaging it is. For a while, its boundless energy and agility even make you forget about the racket around you. And it is very noisy: induction whoosh, exhaust blare, wastegate twitter, road and wind noise, you name it, and it’s there in the cabin with you.

You’re still smiling though. That energy and agility can’t be ignored. My word, when was the last time anyone drove a new Alfa as compelling as this? It’s a car you immediately want to drive hard, to immerse yourself in.

The steering, unassisted and high geared but not too heavy for a sports car, requires two hands at all times, such is the front end’s enthusiasm for ducking and diving. I read somewhere the steering jiggles around like an old 911’s – let me tell you, the 4C’s helm requires more concentration than that of my old 911. It could be tiring on a long run I guess but in small doses on the right road you wouldn’t trade it for anything. Good in the wet? You bet. The 4C’s Pirellis do a fine job of staying stuck. Admittedly at something far less than ten tenths (that’s your job, Anthony), the steering is quick and precise without encouraging any mid-engined nervousness. By the same token the chassis never feels particularly responsive to the throttle. The 4C just stays so darned flat, stable and neutral the whole time. This might go some way to explaining the “shonky handbrake” in this pre-production test car that some testers have commented on. It’s apparently had a hard life being yanked on at speed in order to generate some sideways action for the cameraman (just a tip for you there, Ant).

The 4C has been criticised for its ride comfort but there’s not much wrong with it. Always firm but not crashy and harsh, I thought. And the car is not impractically low that it scrapes its bottom and won’t go over speed bumps. Petersfield holds no fear for the 4C. And something else: the carbonfibre tub around which this car is built feels massively  strong. In this hard-used early car there are some squeaks but generally the impression is one of a very rigid structure. The engine feels to be what it is: a small capacity four-cylinder with a big blower. It is obviously turbocharged – the noise as much as anything, always purposeful but rarely musical – and once it’s cooking the performance tends to be a bit all or nothing. But it is effective. You can achieve a lot with 237bhp when you weigh as little as this car does, and have such short gearing and fine traction. As a result the 4C is every bit as fast as you think it should be.

Despite the sexy looks and mid-engined layout, however, the rowdy and frenetic delivery, coupled with a no more than adequate twin-clutch six-speed box, categorises the car more as senior hot hatch than junior supercar, to my mind at least. It’s not necessarily a bad thing – the performance may not be cultured but it is friendly and useable, which can’t always be said of cars that can get from 0-62mph in 4.5sec. But maybe it is a bad thing if price is important – the 4C starts at £48,000 and the car here, with options, is £54,000.

That’s a hefty whack for a car that some will dismiss as under-engined, unrefined, and a bit makeshift in places. The asking price, though, is surely not the most important factor. Neither is a (very) long list of things guaranteed at some point to drive you mad, chief among them being very ordinary seats.

They are unimportant because we know Alfa can do good seats. And we know it can do sunvisors that work, heating/ventilation that’s reliable and good ergonomics. We know it doesn’t have any argument with the glovebox or armrest per se, and that, if it wants, it can make a car that won’t give you a headache after 150 miles. All these things that are sent to try the 4C owner are not the main issue. The issue is that Alfa Romeo has finally remembered how to make a beautiful looking coupe that you just want to get in and drive the nuts off.

If that’s enough – and let’s face it, it should be – go for it. You’ll have a minor classic, a road/track day weapon built like a McLaren 12C whose place in Alfa’s hall of fame is assured. But ultimately the 4C is more significant for what it represents than what it is. A sporty new beginning, a watershed.

Speaking of which… the 4C floats beautifully. Without once losing its grip on the road. And I didn’t even get damp…