The last time Jaguar marched towards BMW 3-Series territory, it was with the Ford Mondeo-based X-Type. Jaguar’s then-management was shooting for 100,000 sales per year and a good slice of the market inhabited by German rivals. A peak of 73,000 units in 2002 was a good start, but these numbers fell significantly in following years.  At the very best you’d describe the X-Type as an ‘expectations shortfall.’

Then again, surely that was par-for-the-course, given the platform used? Powertrain options were relatively few, and a tax-breaker two-wheel-drive diesel option wasn’t available until years after its launch. Time magazine was perhaps a bit rash in citing it as one of its ’50 worst cars of all time’ but certainly, a hit it was not.

Now, having spent a day behind the wheel of both the XE R-Sport diesel and the supercharged, petrol-engined XE S it’s clear that Jaguar’s new ‘small’ car will cause its German rivals far more concern than its predecessor. With the best of the British motoring press corralled into the technical presentation of the XE, you can almost hear the collective raising of eyebrows as the weight of the new car’s body shell is revealed – just 275 kilos. It’s also the most rigid Jaguar saloon ever built, we’re told. Steel has been used in certain areas, but overall the body is 75% aluminium, making it the most aluminium-intensive structure in its class.

Other claims for the XE include ‘the most sophisticated chassis in its class’ and ‘the benchmark for ride and handling.’ Strong, strong stuff given the XE’s competition, although the sight of an electric motor on the steering rack of an ‘exploded’ XE on display raises the spectre of electric power steering. We are assured the EPAS will feel ‘stiff and connected’ when we’re in the mood to get our elbows out on the twisty stuff, and ‘relaxed’ when cruising.

Engine-wise, the XE sees the introduction of the Ingenium range of diesel and petrol engines, although the engine-related question we were keen to ask was, inevitably, whether the V8 would find itself nailed into the engine bay of the XE.

‘There are lots of studies in place, and some of our competitors have large-capacity engines, we’re told by a friendly engineer. ‘In a world where we’re downsizing in kilogrammes you have to watch adding more power. We have the lightest body in the class and weight bias is an issue… but exciting times are ahead!’

Make of that what you will. Personally we’d hope to see the 498bhp version of the supercharged AJ8 being offered at some point, as has been widely mooted since the announcement of the XE. Once we’d been reminded that our test cars were prototypes – so various alteration and improvements may be in store between now and the official launch – we were unleashed onto Lisbon’s public roads; supercharged XE S first.

The first stint was best described as a ‘commute’ kind of journey, and it didn’t take long to discern the high levels of ride quality, quietness and comfort. Even when the journey changed from a ‘commute’ to more of a ‘B-road hustle’, we were still mightily impressed by the continuously-variable damping system. Bear in mind that the XE S runs on 19 inch rims … Similar praise was in store for the ‘electric’ steering. Despite it being top of my list of things to assess, once on the road it simply didn’t impose its electric-ness upon me at all. Although it could be argued that on a track the EPAS might not be a match for a good hydraulic system, on the road EPAS means more power, less friction and greater economy. Of all the journos on the test, only one wasn’t convinced of the EPAS, and even he admitted that it was a significant improvement over other systems. I found it to be far from the lifeless distraction it’s accused of being on some cars. Instead it felt instinctive and engaging; in conjunction with the adaptive damping it left me wishing I could hop out and into an equivalent 3-Series to see if the gains were as much as they felt.

Engine-wise the blown 3.0-litre V6 is shared with the F-Type. It predictably sounds racey at high rpms, but smooth and quiet when you’re in less of a hurry. Even though it packs 340PS and allows for a zero-sixty time of 4.9 seconds, the car feels quite capable of handling far more power and torque. That V8 must be a shoo-in at some point … Having reached our stop-off it was time to wave goodbye to the XE S and plonk ourselves into an oil-burner. Although the continuously-variable suspension system will be available on all XEs, the diesel R-Sport made do with the ‘Sport Passive’ version. The ‘magic’ of the ride had gone compared to the XE S, but it still compared (from memory) very favourably to the competition; the reduced road wheel size helping maintain some of the ride comfort of the XE S.

But of course the big story with this car is the new Ingenium diesel, being a brand new engine built at a brand new plant. Jaguar was keen to point out that these were, literally, the first batch of the new 180PS diesels to have been built and as such might benefit from a little further development time ahead of full production. Aside from displaying a slightly coarse nature off the mark, from then on it is a case of a pretty flat torque curve, minimal turbo lag and plenty of overtaking oomph. Another blend of bumpy country roads, fast b-roads and urban ‘shuffling’ on our way to the airport concluded the drive. Once there, I hopped into the rear seat to sample the inevitable dreadful legroom. That isn’t to critisise Jaguar: all cars of this type have dreadful rear legroom. The manufacturers have long-since sussed out that the people who buy them typically need little more than room for a baby-seat.

Of course we’ll have to reserve final judgement for the cars Jaguar will put into actual production, but on first acquaintance the ride, quietness, build quality, steering and performance are all up to snuff… at the very least.

However, to properly gatecrash the small-saloon market people are going to have to want to replace their German car with a Jaguar. This time around, that may not be such a hard sell! 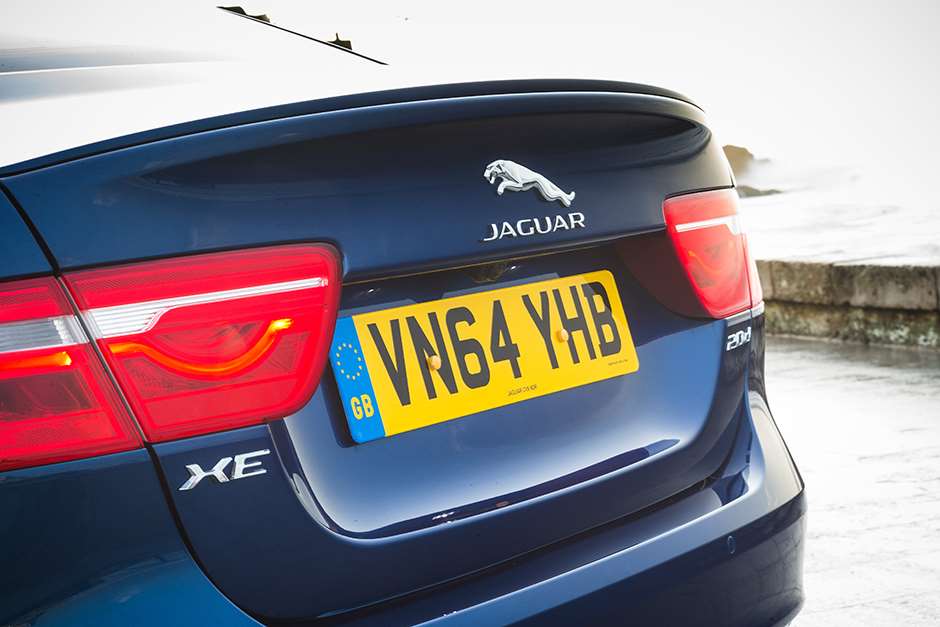