Jaguar MkVII vs XJR ‑ The Drive So you settle down in the magnesium Mk VII and, despite the fact you know precisely how trick it is under the skin, you still can’t help thinking of it as Downton Abbey on wheels – even the suspiciously sportif steering wheel cannot compete with so many acres of wood and artfully aged leather. You fire it up and note with approval a smart bark of intent from the exhausts, but still nothing to disturb the stately home illusion. So you set off and, as soon as you can, put your foot down. 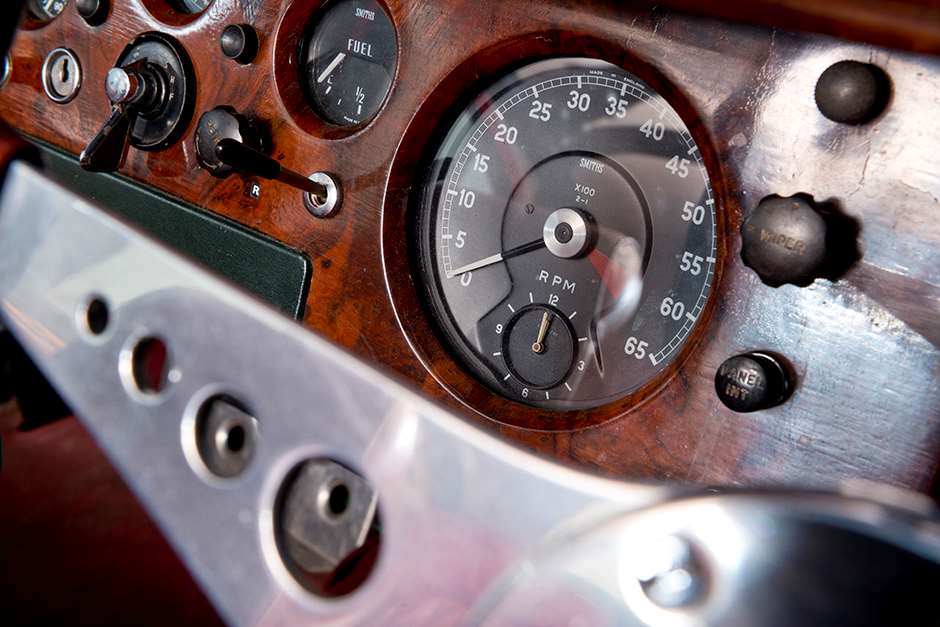 If you don’t make an involuntary noise at that instant, be it a giggle, snort, shout or scream you had better check your pulse because it’s likely you’re dead. The mobile mansion leaps forward, engine howling, prow sniffing the air while you sit there wondering what force from on or beyond earth has taken possession of this car.

‘If you don’t make an involuntary noise at that instant, be it a giggle, snort, shout or scream you had better check your pulse because it’s likely you’re dead.’

Oddly, despite its apparent size, the one thing this experience is not is in any way off-putting. The car tracks arrow straight, never using an inch more road than you expect. But wait, what is that hoving into view? It’s a corner and, make no mistake, it’s a big one. This Mk VII has been set up to race and yet it still rolls so much the far side of the cabin looks like it’s been repositioned at the top of a steep hill. But what is disconcerting about body roll is not the amount of roll itself, but the rate of that roll, a characteristic over which the Mk VII exhibits masterly control. So while it might from the outside seem to be on the point of falling into the ditch, inside it’s just highly amusing. And the car is so vastly, improbably, fast. That throne-like driving position helps, as does the incongruity of the surroundings in which you find yourself, so much so you actually wonder if it’s not so much the power as the environment that makes it feel fast. But then you get in the XJR – a car capable of hitting 60mph from rest in 4.5sec flat – and realise that, no, the Mk VII is just bloody quick. XJR-quick? Not quite, but closer than you’d ever imagine a car that started life 64 years ago might be. So what of the XJR? Can you feel its lightness as you can that of the Mk VII? I believe so; it has a very long wheelbase, so it’s never going to feel nimble, but it offers the precision and response that heavier cars lack. It feels lighter on its toes than any such massive limo should and is an actively entertaining car to drive fast, which is a still a rare talent among such cars. But, while I liked and admired the XJR, the Mk VII grabbed my heart with both hands and, weeks later, shows no sign of letting go. I am beyond blessed to test all manner of cars – old one, new ones, road cars, racing cars – my job and ambition is to experience as many as possible – but over time memories do fade. But not, I suspect, this one. I have driven many cars that are more powerful, faster, prettier, grippier, better both to listen to and look at. But the Mk VII has a charm, or at least this one does, that transcends mere ability. Truth is I absolutely adored this machine. ‘What a fabulous car’ is how Stirling Moss summed up his feelings towards this car, a sentiment with which I can only thoroughly agree.