The Frenchman, The Mini, and Les Travaux (That's The Works To You) Ever since Mini took over Goodwood Motor Circuit in early May for the launch of the new John Cooper Works we have wanted to get back behind the wheel for another go. Preferably with a stick to stir rather than a paddle to pull…

We have had our wish granted, in part at least. That manual ‘box is proving elusive. Still, the hottest Mini Cooper ever has to be worth a catch-up

As does Nicolas Griebner. Officially he’s head of product for Mini UK, but he’s really a mad-keen Mini enthusiast, car collector, race driver and Goodwood fan. It is always encouraging when you come across people as enthusiastic as Nicolas working in the industry, so it was good to spend time with him, too.

But the car first. And away from the Motor Circuit (and the inevitable mind’s eye picture of a Mini Cooper four-wheel drifting through Madgwick in the shadow of a Ford Galaxie…), how does the most powerful production Mini fare in the big outside world? 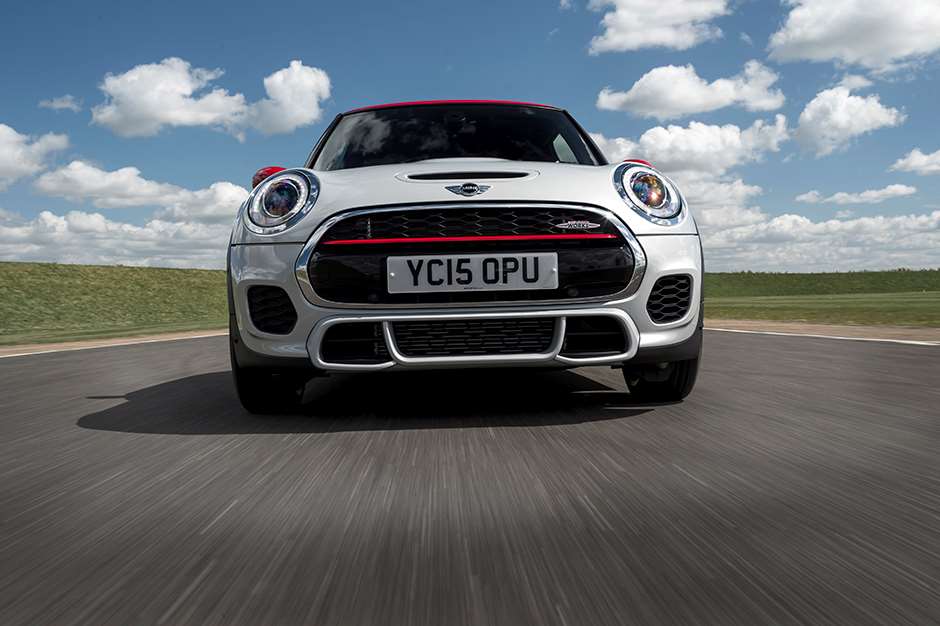 When we drove it at the debut we liked it – the fastest and friendliest Mini ever we said, full report here.

And this time? Well, we liked it more. With the exception of the tachometer (more on that in a sec) there’s not much not to like – even the ride, so often the downfall of cars like this, is quite acceptable over lumpy back roads when set in comfort mode. Plus, there’s a great deal to enjoy, chiefly a pleasing amount of grunt. 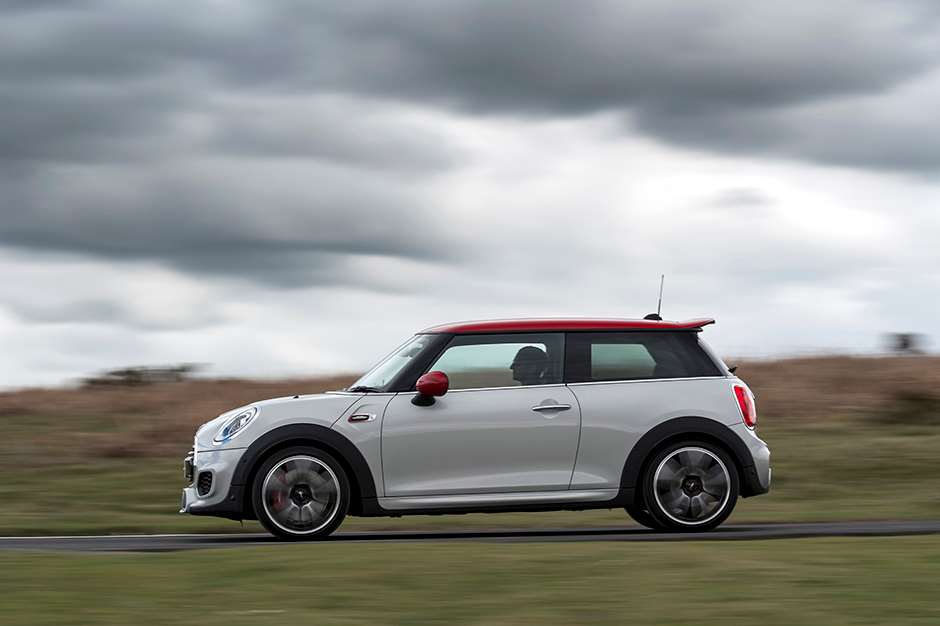 All of which tells you quite a bit about this car’s serious performance potential. There are substantial (335mm) four-piston fixed caliper front disc brakes to rely on if you run out of road at the car’s 153mph max.

It’s only the amount of rubber on the road that sounds a bit Mickey Mouse: the tyres are 205 section and plenty of boring hatches have wider tyres than that. Hang on a minute though: 231hp and skinny tyres? This could be fun. And you can turn off completely all DSC help…

So it proves. If the new JCW was a hoot on the circuit it’s just as at home on backroads. It’s grippy enough and points well, but will easily generate nice friendly slip angles if you let it, and not all at the front end either. With (relatively) compact dimensions and good quick steering, it’s an immediately engaging car to drive, an appeal reinforced by plenty of rorty noises, well-bolstered seats and a cracking driving position. 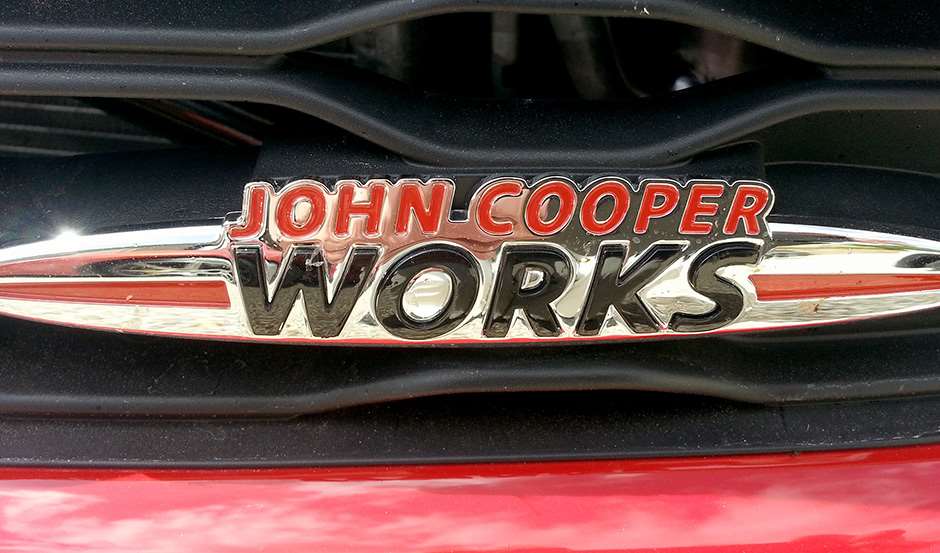 And it’s certainly quick, as well as delivering a you-wouldn’t-know-it-was-turbocharged power delivery. The engine revs really well, right to the red line of…well actually, not a clue. There are three tacho options in this car, all of them less than ideal.

There’s a small and difficult-to-read crescent tacho on the side of the speedo; you can have a tiny virtual rev counter dial in the (optional) head-up display; and different coloured lights around the dinner plate of a screen in the centre of the dash can be made to light up progressively as revs rise. It’s all a bit Wurlitzer.

You have got to love the new JCW though. A real pocket rocket with character, and quality. Maybe it could feel more ‘works’ and less Cooper S-plus – a little rawer and more visceral – but the fact remains that in this form it would be a very easy car to live with, as well as a hugely enjoyable one. 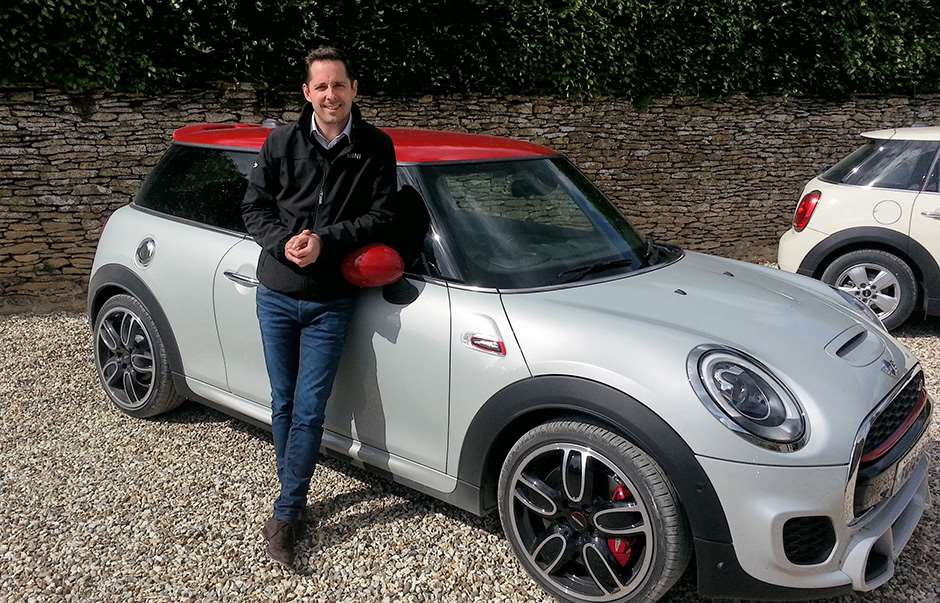 The best sort of product manager

Just as new as the Works is Nicolas Griebner – he took up the reins as UK Mini product manager three-months ago. There are plenty of product managers out there, up to their ears in the minutiae of specs and prices, who do a great job but who won’t be troubling us. Nicolas is different.

For starters he races a BMW M235i Racing in the endurance rounds at the Nurburgring Nordschleife. Best time? ‘Around eight minutes’. In his garage at home he has a BMW Z3 ‘breadvan’ (or clown’s shoe) coupe – not the M that was the only version sold in the UK, but a 2.8 version sold on the continent. ‘I just fell in love with the shape of it,’ he says. He also has a new Lotus Exige V6 and is now on the look out for a Mini.

Not any old Mini but one of the very last classic Minis, a Cooper Sport 500 limited edition jobbie from 2001. The first new car he bought in 1998 was a 1998 Cooper (‘tahiti blue with a white roof and black leather’) but he sold it, a decision he has been regretting ever since.

It’s true to say the half French, half German (born in Alsace) Nicolas does love his Minis. He got married in a new-shape Cooper in 2003. He has worked for the group in the UK and Germany since 1997, including a stint at Rolls-Royce from 2005.

Understandably he loves the Goodwood Motor Circuit and takes part in track days as often as he can. ‘Racing at the Nordschleife is special of course but I love driving at Goodwood too, and think I will be doing more of it. My wife will be a lot happier passengering at Goodwood than she is at the Nurburgring.’

Complete car nut? ‘I’ve been into cars since I can remember. Since, as a child on long motorway journeys at night, playing our family game of identifying the cars ahead only from their rear lights. I never made a mistake!

We reckon the industry needs people like Nicolas, and we need cars like the new Mini Cooper Works.