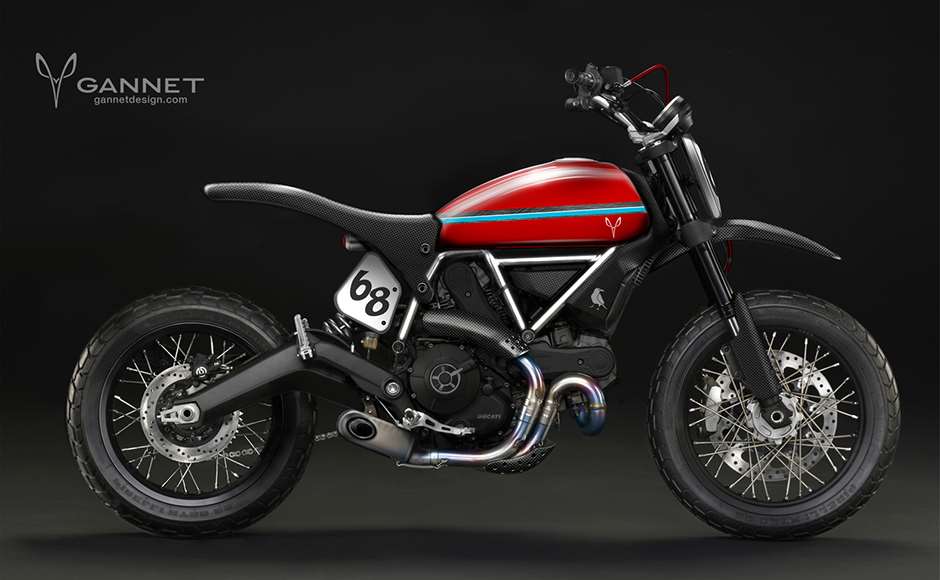 No sooner did Ducati announce its new Scrambler, then our go-to designer Ulfert Janssen, head of Gannet Design  (who’s wowed us several times already with his creations) set about a few interpretations, and here they are.

Chris Harris had a ride of the Scrambler at the launch recently and liked it – especially the wide variety of different styles it may be ordered in. However, Ulfert has taken the notion a bit further in order to create a custom Scrambler and as usual they look very, very cool. He’s done a number of iterations, all of which can be seen here, but these are a few of his favourites …

The main image shows the Scrambler largely unchanged, but with a lighweight, racey carbon-fibre one-piece rear section. This next one shows similar treatment, but more for road duty, with an oxidised-metal tank, a sturdy-looking extension to the frame and a carbon mudguard. …while my favourite is this one, which shows a more subtle frame extension, but with the addition of a protective trellis frame around the tank and an engine guard which looks cool on the road and also begs you to find out how it behaves on somewhat more challenging terrain. Unlike some of Ulfert’s other work, there don’t appear to be plans to tranform any of the Scrambler designs into reality just yet. Mind you, this last ‘trellis tank’ idea looks so good, I wouldn’t be surprised to see it serve as ‘inspiration’ for someone out there looking to transform their Scrambler, beyond what’s available through Ducati’s already-impressive range of options.