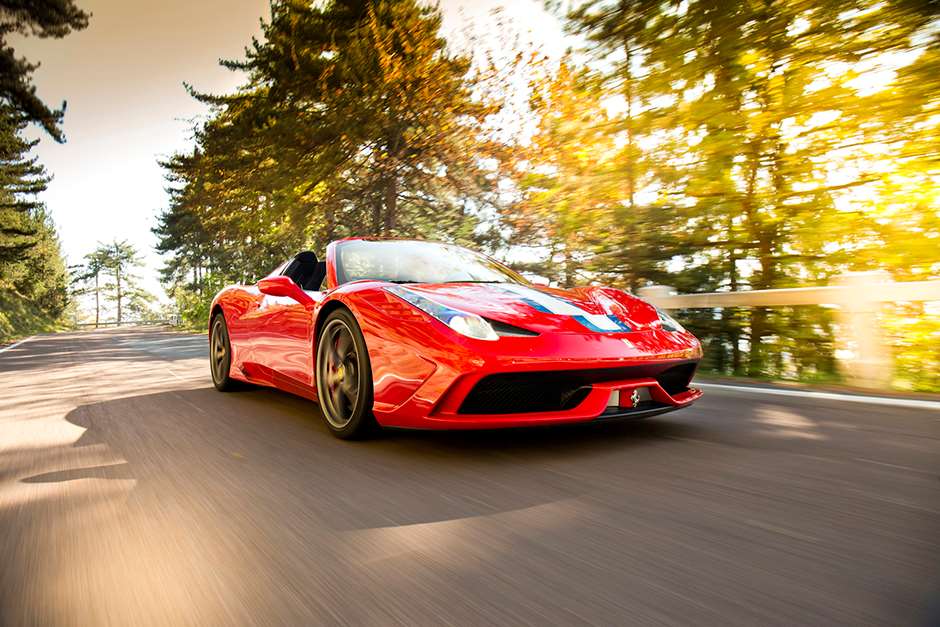 It is very rare for a motor car not to be profoundly ruined by the removal of its roof. It is for this reason alone that I only tend to like open top cars that were designed that way in the first place, like the Lotus Elise; or ones which don’t rely on a roof for structural stiffness, like the McLaren 650S.

According to this reasoning, the Ferrari 458 Speciale Aperta should be a crock of old nonsense. Quite why anyone would want to make a Speciale more bendy and less competent in the interests of gaining a sun-tan should be beyond comprehension, but that stance doesn’t take into account the weird situation regarding the 458 Spider.

Obviously the Spider is the open roof version of the Italia, and it is in many ways a more pleasant road car than the Italia. The extra flex in the bodyshell means less spring rate and therefore greater compliance. The Spider rides bumps better and over tricky roads is probably the quicker car, because it isn’t being deflected and the driver isn’t forced into making so many small steering corrections. There is a real skill to matching the spring and damper rates of a convertible to its body flex, and the 458 Spider is one of the best. So I should have had high hopes for the Aperta. But, that would mean not being horrified at the concept of an open top version of a car that trades on being the sharpest, most dynamic, production Ferrari. Isn’t it just the most appalling piece of cynical revenue generation, trading on a silly marketplace filled with tasteless people who don’t know better?

I was thinking, and luckily not saying aloud, this when a very kind man offered to let me drive one of the few Apertas in the UK. This was a confusing offer because, on the one hand I didn’t want to be rude about the conceptual thinking underpinning his new pride-and-joy, but I was also overjoyed that he had brought the car to a track day! As many of you will be aware, the Aperta is very hot property right now, with cars reportedly selling for upwards of half a million sterling. They are natural garage queens. I was driving at Castle Combe, which, as many of you will know, is a fearsomely fast and technical circuit, much like Goodwood, and which is one of the few UK tracks to be a very good test of a road car chassis because of the weird undulations and bumps. Again, much like Goodwood.

The weight penalty for the folding roof mechanism is around 50kg, which isn’t too bad considering it’s a metal panel sitting over your head and needs electric motors to operate it. There are no official figures for the loss in twist stiffness, but, where I find the standard Spider’s road manners more pliable than the Italia’s, there is one shortcoming – the steering rack really does shake and shudder. At times it feels like it’s moving around in the car! Nosing the Aperta out onto the circuit it certainly feels little different to the Speciale – there are no squeaks and groans over the paddock roughage and any fear that the powertrain might feel in any way blunted by the extra weight evaporates the moment you push the long-travel pedal into the bare floor. It might lose a fraction of a second from rest to 125mph, but it’s still crazy fast and, with the traction switched off, it wants to spool-up in second gear.

And the noise is less severe than the hard-top’s. At the risk of sounding a little too mature, I find the Speciale’s exhaust note too loud – it sits in that unfortunate category of being noise for the sake of noise and that’s not a fine attribute. The Aperta has been mildly silenced to protect the hearing of its occupants with the roof down, and that makes it less shouty and, curiously, improves the quality of the noise it emits. This is a very good thing. 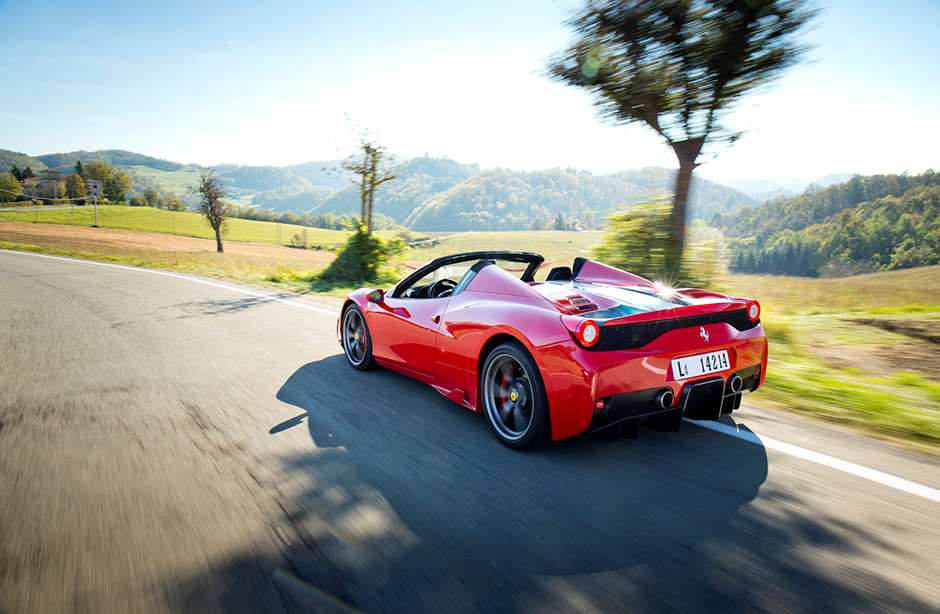 As is the chassis – because the same effect of added compliance works in the fastest convertible. The steering rack is far better located than the Spider’s and the car’s ability to keep all four wheels on the ground under hard braking into the bumpy Quarry corner is truly impressive. You can then leave it in fourth, luxuriate in the complete lack of understeer, and feel the rear axle squirm around as you get back on the gas. This, remember, is a middlingly powerful Ferrari, so it has 600hp from a normally aspirated V8, and it makes most racing engines seem lethargic and asthmatic. It is one of the great road motors and deserves celebration.

And it’s at around this point – three corners in – that I must have completely forgotten I was in a convertible with the roof up. I wasn’t cursing the thing, or accusing it of being a poseurs folly. I just drove it as fast as seemed sensible, let it slide around a little and kept thinking to myself that the times it was knocking out would probably make it finish reasonably high up a racing grid. It pulls 160mph into Quarry – that’s outrageous. The brakes are superb, powerful and without fade, the steering is fast – lifeless, but synapse-accurate, the whole thing just builds rhythm and a sense of confidence I’ve not experienced in many cars around Combe.

And it’s only when we’re wandering back into the pits, and shut down the engine that I look down between the seats and see an extra window button. The electric roof mechanism switch. Truly, I had forgotten that the Aperta was a convertible. Now that maybe because I was wearing a crash helmet, but for feedback and response, it was superb on the track. I had also forgotten that the owner’s wife was sitting next to me. Luckily she was grinning. Is the Aperta worth the crazy premium? Not if you judge it as the ultimate 458 – but find me another car that drives as well and as fast and with such a sense of joy, with a removable roof for less money. I can’t think of one.

I might even need to re-think my opinion of these convertible things.