Got all that? Hope so – in 51 years of production, the Mustang has built up quite the train of personal baggage behind itself. It’s a car of staggeringly humble underpinnings, which became a global phenomenon before lapsing into self-parody and eventually isolationism. As a metaphor for the history of America itself, you couldn’t get much better. Especially as now, in the post-Bush-era, the Mustang is extending a hand across the ocean, and, amazingly, it’s now the right (and indeed, right) hand…

Thanks to the ‘One Ford’ plan initiated by former Ford CEO Alan Mullaly, eventually all Fords will be ‘Merican Fords and that means that, for the first time in 50 years, you’ll be able to buy this none-more-stars-and-stripes muscle car with the steering wheel on the Imperially British side of the car.

And hooray for that. It would be easy to get bogged down in talk of value for money, build quality and suspension settings (and in a moment, we will…) but the simple fact is that, in the sensible grey-black-and-blue world of the modern day, German-dominated, car park, the Mustang will represent a crimson streak of pure Hollywood escapism. Rather like going to see Avengers: Age of Ultron after spending a day stuck at your desk and paying the bills, driving a Mustang here in Blighty will be a reminder that things don’t need to be quite so serious all the time. 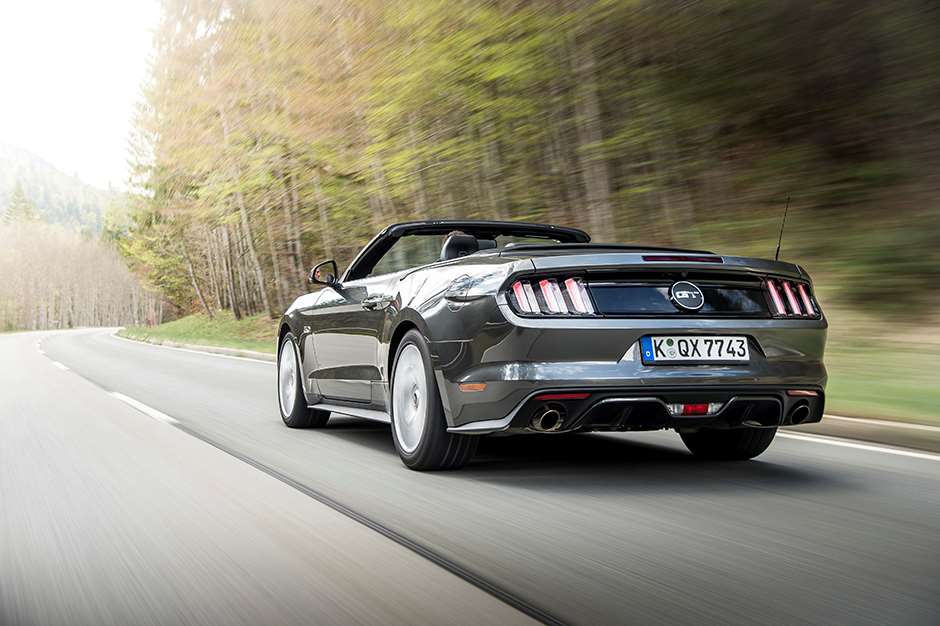 Of course, Ford is serious about finding European buyers for the Mustang, and while that doesn’t mean that there will be a company-car-friendly diesel version any time soon, that does mean that you can buy one with an engine more useable than the 5.0-litre V8 model we’ve tested here. That would be the 2.3-litre EcoBoost four-cylinder turbo, which will also shortly find a home in the new Focus RS.

That engine, although pretty good actually, kind of quivers at the might of the 5.0-litre V8. This may be an old-school bent-eight, and 415bhp is hardly what you would expect from as big an engine as this, but by heck, this is as good an engine as you’ll ever drive. Loud, proud and just a little bit mad, it makes noises that no decent person should listen to and consumes enough fuel in one sitting to require a major change in US foreign policy. It’s brilliant, to be honest, as raucous as you’d expect yet also tractable and easy-going around town. Fuel consumption is laughable, of course. Ford reckons it’ll crack 20mpg on average. We got more like 15mpg.

And that’s with a manual gearbox. You’d expect to find an automatic here in such an all-American car, but as far as Europeans will be concerned, the six-speed manual transmission is actually a delight to use — hefty and mechanical in feel, even if it sometimes baulks at a rushed change. 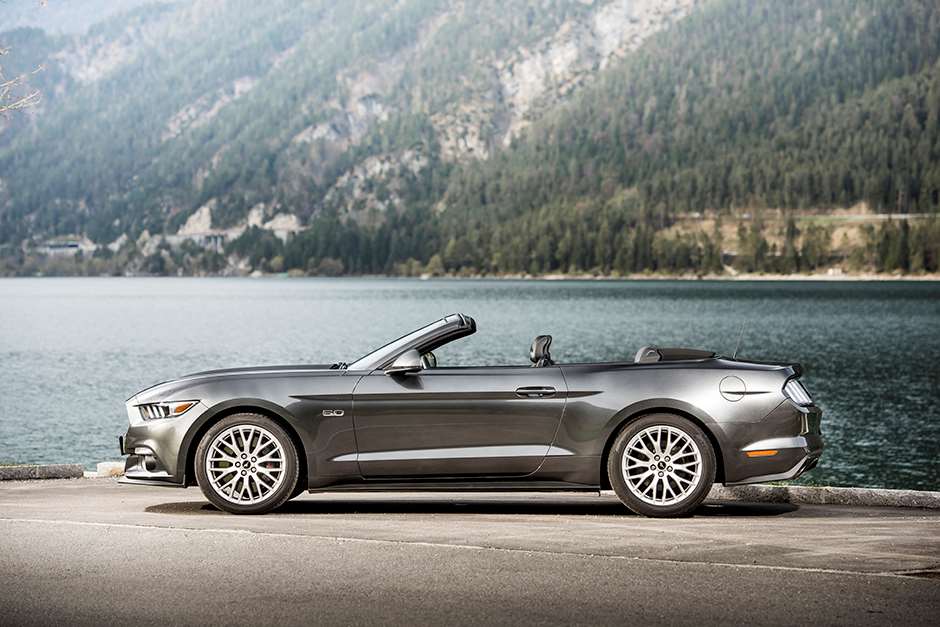 The steering is also uncommonly good by American standards. It’s an electrically-boosted system, and while you can alter the weighting between Normal, Sport and Comfort modes, there’s really not much point in doing so. Just leave it in Normal and you’ll find a rack that responds surprisingly briskly for a car with such a big, bluff front-end and one that actually has a modicum of feel about it.

The only problem is that the steering, being so good, goads you into pushing the ‘Stang just a little bit harder and more enthusiastically than you probably should. It’s not a bad car to drive, not bad at all; it’s just that you have to accept certain limitations. Take for example driving along a stretch of two-lane blacktop, just outside Munich (the location for the Mustang’s launch event). The corners are plentiful and the surface excellent and, combined with a paucity of local traffic, it’s an ideal location to get to know the Mustang. So far, it’s felt decently controllable and tractable with a comfy, not-too-soft ride quality. So, push a little harder… And suddenly it all falls apart. That underlying softness becomes sloppiness and the steering suddenly comes over all Congressional Committee Hearing and decides it’s going to take the fifth. So, it’s no sports car then.

But was it ever supposed to be? While this Fastback feels a little better tied down to the road than its convertible cousin, this is not a sports car — it’s a muscle car, and that means it’s an expert at going very fast in a straight line, going very fast while sideways and being essentially useless at all other times. Actually, it’s better than that but it’s certainly not going to cause the suspension engineers in Munich or Ingolstadt sleepless nights any time soon. 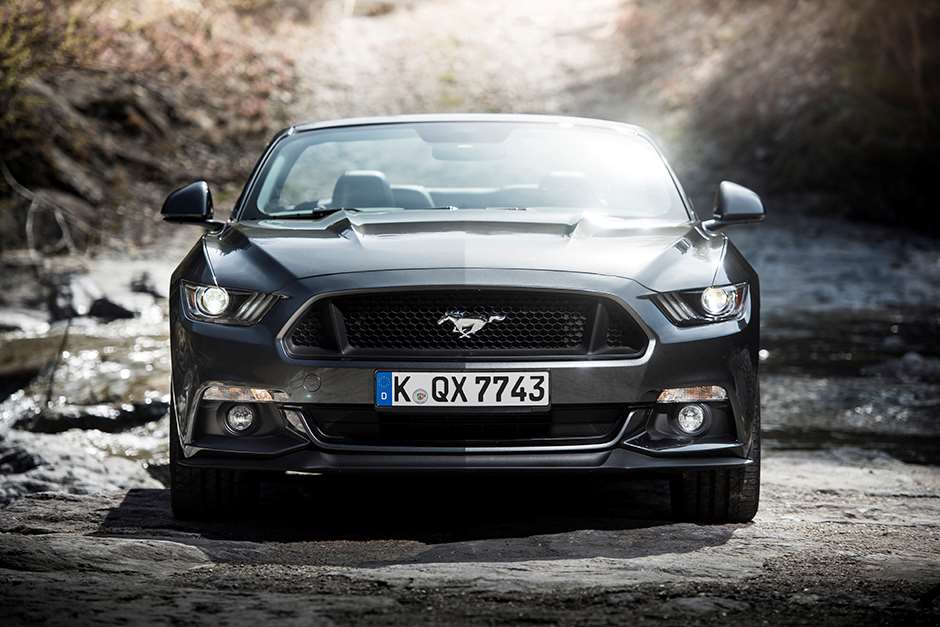 Equally, the quality control stewards of Germany’s car industry aren’t going to be bothered by the cabin. By American standards it’s not bad, and basic boxes such as a good driving position and clear instruments are ticked. But some of the materials used, and some of the ergonomics, are just dreadful. The ‘leather’ on the door cards feels as if it was extruded from recycled lino and the bit of plastic around the electric window switches (something your fingers are going to encounter a lot) wouldn’t be out of place on a Suzuki. A second hand Suzuki. From 1992.

There’s a bit of a question over price. This Convertible lists at £32,995 (minus options), which makes it look a bit pricey, given that you can have a V8 Coupé for the same cash, or an EcoBoost Coupe for £5k less. Then again, all things are relative. That’s still cheaper than a BMW 435i, and significantly more powerful. OK, so it doesn’t drive as well as the Beemer at the limit, but as I’ve already pointed out, who in hell buys a muscle car to drive it at the limit? Never, at any point during my time with the ‘Stang, did I ever think ‘I’d rather be in a nice, sensible 4 Series or A5’.

Slightly soggy of suspension and gimcrack of interior the Mustang may be, but I have never been quite so happy to be driving a car. There are cars that are more agile, more communicative, faster, better built and indeed better value. But, top down, Tammy Wynette warbling, shades on and glorious V8 soundtrack rumbling its song of freedom, I honestly couldn’t think of one I’d rather have been in.