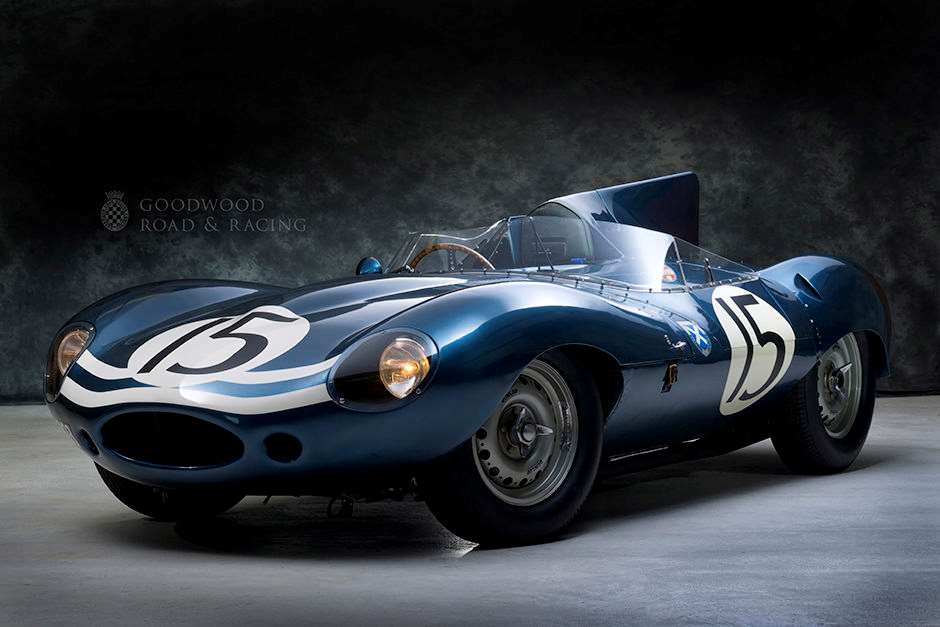 Few racing cars have such an aura about them as the Jaguar D-Type. Stand next to one if you get the opportunity and tell me if your sixth sense doesn’t detect you are in the presence of something very special. For me it goes beyond the gorgeous looks, the famous names associated them, the massive speed capability and of course those three LeMans triumphs. No, these are cars which, as well as all of the above, have been liberally sprinkled with stardust.

At this year’s Revival meeting there were no fewer than 32 D-Types present (including the XKSS road-going variants.) Among them were ‘RSF 301’ which won at Le Mans in 1957 and ‘OVC 501’, which was the original D-Type chassis and which has been owned by Jaguar all its life and never raced. A good number of the D-Types present bore wonderful provenance, but the car we chose to focus on was ‘RSF 303’ (chassis XKD 603) which is indisputably the most original of the long-nose D-Types in existence.

For such an important piece of British motor racing heritage it actually had a rather ordinary start to its life. It was built as a ‘factory’ Jaguar racer and debuted in 1956 in the hands of Mike Hawthorn at Silverstone where it recorded a DNF. Its next outing was at the Nürburgring 1000Kms with Paul Frere and Duncan Hamilton driving, where it suffered an accident after which it bounced back with a 3rd place at the Reims 12 hour race. Next up came its first big test at Le Mans where it was meant to be a spare car but was pressed in to service after its sister car, chassis XKD 606 (more on that car later) was damaged in practice. In the race the same fate befell ‘603’ in the hands of Paul Frere and Desmond Titterington. With a rather average first season under its belt, it was painted Flag Metallic Blue and sold to the legendary Ecurie Ecosse team. In the hands of the Scottish outfit the car scored a fourth at Buenos Aires, followed by a couple of ‘unplaced’ results at Spa and Nürburgring. Ron Flockhart managed a win with it at St Etienne after which came XKD 603’s finest hour. Having replaced XKD 606 a year earlier as a Jaguar ‘works’ car at Le Mans, both cars lined up in the same Ecurie Ecosse team in 1957. The whole race was one of Jaguar’s finest ever achievements, with D-Types filling five of the top six places. ‘606’ came in first with ‘603’ second being driven by Ninian Sanderson and John Lawrence, eight laps down and running a 3.4 litre motor versus the 3.8 litre lump in the victorious car. However, neither machine was afforded much of a rest, and the crew’s well-deserved hangovers had hardly cleared by the time that both were driven straight to Monza from Le Mans.

The scoop you can see in some of the pictures is the very same as used at Monza for the Race of Two Worlds or ‘Monzanapolis’ which took place in 1957 and 1958 the weekend following Le Mans. The scoop was there to try to cool the rear tyres after it transpired that the punishment being dished out to the Dunlops up on the banking and at great speed was causing the right rears to overheat badly. Luckily for us the car’s owner Clive had the scoop with him when we photographed the car and kindly fitted it – an extremely rare sight. Back in ’57, ‘Fearless’ Jack Fairman managed fourth place running ‘backwards’ (anti-clockwise) at Monza, although the American cars were far better suited to the track and dominated the event.

“An American by the name of James Munro contacted Ecurie Ecosse wanting to buy XKD 606 – the winner of the 1957 Le Mans race. The Scots agreed initially but had a change of mind and actually sent XKD 603 across the pond instead!”

XKD 603 didn’t do a great deal in 1958, save for another win at St Etienne again in the hands of Ron Flockhart. It returned to Le Mans for a third attempt, albeit with a 3.0-litre motor as per the new regulations at the time, but failed to finish. It returned to Le Mans in 1959 but again didn’t see the finishing line. Its last two recorded race results in-period were a second place at Silverstone in the hands of Ron Flockhart and a sixth at Goodwood with Flockhart sharing pedalling duties with John Bekaert.

Now, what typically happens to racing cars at this point in their careers is that they become somewhat unwanted. They’re no longer competitive and are often broken-up for parts, converted into ‘specials’, or even worse just become ‘lost’. Such was the D-Type’s impact that they were never in danger of the latter, but following the initial wave of their careers many were rebuilt, painted differently, modified and so on – which inevitably diluted their originality in terms of how they were raced in-period.

Not so XKD 603. An American by the name of James Munro contacted Ecurie Ecosse wanting to buy XKD 606 – the winner of the 1957 Le Mans race. The Scots agreed initially but had a change of mind and actually sent XKD 603 across the pond instead! As it happened, 606 was outwardly identical but for a single wide stripe across its nose, whereas 603 wore two narrow stripes. When 603 arrived in the States it bore just the one…

Mr Munro had specified that 603 be sold with the 3.8-litre motor fitted as opposed to the 3.0-litre version it ran when it last raced in the UK at Goodwood. He paid $5235 for it and it was raced successfully until 1971 when Sir Anthony Bamford acquired the car and was informed shortly after by esteemed Jaguar historian Andrew Whyte that he was in fact in possession of XKD 603. Undeterred, Sir Anthony campaigned the car throughout the Seventies and Eighties with Willie Green doing the driving, and then through the Nineties and Noughties with Frank Sytner at the helm. The car was successful on-track and astonishingly, in all that time it suffered no more than one or two minor race-related impacts.

“Incredibly, the car has the same engine block fitted as when it left the Ecurie Ecosse workshop in 1959”

In fact, to this day the car has never been fully restored. Engineer David Brazell has known and worked on the car for 30 years and can attest to its originality. ‘It has to be the best D-Type’ he says. ‘It’s had no serious accidents since it was raced in-period and has always been maintained exactly as Jaguar would have looked after it. It was repainted in 1978 for the Le Mans Classic and last year we restored the single stripe on the nose to the two stripes it wore in-period, but that’s it. The interior panels have never been repainted since the car was sold to Ecurie Ecosse, and you can see in places where the black paint is wearing through to reveal the original British Racing Green beneath.’

In addition to all of this, incredibly, the car has the same engine block fitted as when it left the Ecurie Ecosse workshop in 1959. David again: ‘Despite the long time I’ve known this car, every time I see it, it knocks my socks off! It’s wonderful.’

So there you have it. Probably the most original D-Type Jaguar there is.

Our stunning pictures were captured by Antony Fraser in – believe it or not – a scratch-built temporary ‘studio’ whilst scrutineering was going on at this year’s Revival meeting. No, seriously!

Antony photographed some other cars too, but that’s another story …