I saw Richard Attwood today. I didn’t mean to, I just happened to be at the Porsche Centre at Silverstone and noticed a familiar pate in the passenger seat of a 911 as it came in off the small test track they have there. As he has done for many years, he was instructing Porsche customers how to get the most from their cars. 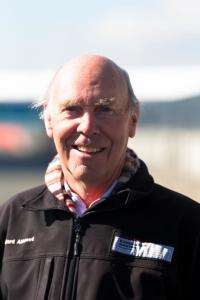 And knowing Richard as I do, he will have sat there while some hotshot flung him around the track without feeling the slightest need to mention he was no ordinary instructor, that he in fact was not only one of very few people to race a Porsche 917 at Le Mans, but that he did so three years on the trot, retired in 1969, winning in 1970 and coming second in 1971. In fact he should have won all three: in 1969 he and Vic Elford were leading by miles when the transmission broke with only a couple of hours to go and in 1971 he and Herbie Muller lost 45 minutes fixing a gear selection issue that then affected the car of Helmut Marko and Gijs van Lennep, but because now Porsche knew what was wrong, it only took them 25 minutes to fix it. At the flag they were less than five minutes behind. But no matter, what history will rightly recall was that Richard Attwood and Hans Hermann delivered to Porsche its first ever win in the greatest sports car race on earth.

Down in ninth place that year was a strange looking Porsche 908/2, driven by British driver Jonathan Williams and Porsche factory test driver Herbert Linge. Its appearance was made strange by the need to package a huge movie camera in its nose to get real world footage for Steve McQueen’s heroic flop ‘Le Mans.’ The fictional story of the battle between the Gulf Porsche 917s and factory Ferrari 512Ss is good (even though a Gulf 917 never did win Le Mans and McQueen never raced there), but in many ways the story of Attwood and Herrmann’s race is more remarkable still.

It started with what Attwood readily admits was a massive miscalculation. Because he’d done so well the year before, Porsche had told him he could choose both the car he was going to drive and the person he was going to drive with. And while a 5-litre 917 with a five speed box was now state of the art, he chose a 4.5-litre, four speed, short tail car because it would likely be more reliable. For the same reason he also chose Herrmann who aged 42 had already promised his wife he would retire after 17 years as a professional racing driver.

It looked like a disastrous decision. ‘We qualified 15th, the 5-litre cars seemed bombproof and for us to win we’d need not only overtake a lot of cars but for at least a dozen of them to retire. Compared to a 5-litre long tail car, we were 30mph slower on the straight… We had not only to have a clear run but also to hope for 14 cars in front of us to break or hit trouble before we could think about winning the race. It wasn’t a slim chance, from where I was sitting, it was no chance at all.’ The carnage started in the first hour. A gaggle of Ferraris all fell out together, the Pedro Rodriguez had to retire his 917 with a broken cooling fan, while Mike Hailwood simply crashed his all by himself. Jo Siffert then threw away apparently certain victory by over-revving his 917 in his eagerness to overtake a back-marker.

Not that Attwood was finding it easy himself, not least because the weather had turned. ‘The car was basically fine but the water was getting everywhere, particularly into the ignition and plugs, so we had to work the engine harder to keep it hotter and therefore drier.’ I can remember coming out of the Esses and for exactly that reason giving it a load more throttle than I normally would. In an instant I was sideways, and I mean seriously sideways right across the track. It came back ok but I can remember thinking it could all so easily have been over in that moment. Didn’t try that again.’

That year it rained for 20 of the 24 hours and having been lucky enough to drive an identical 917 in the dry, at Silverstone with the track to myself, I can barely begin to imagine what it must have been like within that fogged-up flimsy, glass-fibre clad space frame, thrashing down to Mulsanne lap after lap at over 200mph, peering through the wall of spray thrown up by other competitors. By the tenth hour, and contrary to every expectation, the slowest 917 in the race was leading it. ‘It was absolutely not what I wanted,’ recalls Attwood. ‘With all that had gone on, plus that weather, the one thing we did not need then was the added pressure of leading.’

But lead they did, through the night and next day, until the only remaining threat was the psychedelic Martini-liveried 917 of Larrousse and Kauhsen. It was a long tail car, far quicker than Attwood’s on paper, but trickier too, especially on a wet track. It will never be known if Richard could have been caught because the last thing Porsche wanted after so many years waiting to win Le Mans was to risk it again by letting these two battle it out to the flag. The Martini car was told to hold station, but given that it was five laps down at the flag, I doubt very much it would have ever caught Attwood’s slow and utterly unfancied steed.

So win they did, covering 2863miles in 24 hours at an average of just a smidge short of 120mph, through some of the filthiest weather ever thrown at La Sarthe. And Attwood’s view of it? Modest as ever: ‘Really it was Porsche’s win, it was such a huge moment for them and Le Mans really is a manufacturer’s race. If you are in F1, once you’re in the car that’s it – what you make of the machinery is down to you alone. But a win at Le Mans depends on you, your team-mate, your pit stops, your tyre strategy, your mechanics and so on. The driver is just a cog in the wheel.’ Spool forward 45 years and Richard Attwood is still racing, flinging a 911 around Goodwood at the Members Meeting, still driving with his trademark precision and smoothness. I just hope whoever was sitting next to him at Silverstone today knew who was in his passenger seat and how lucky he was to have him there.