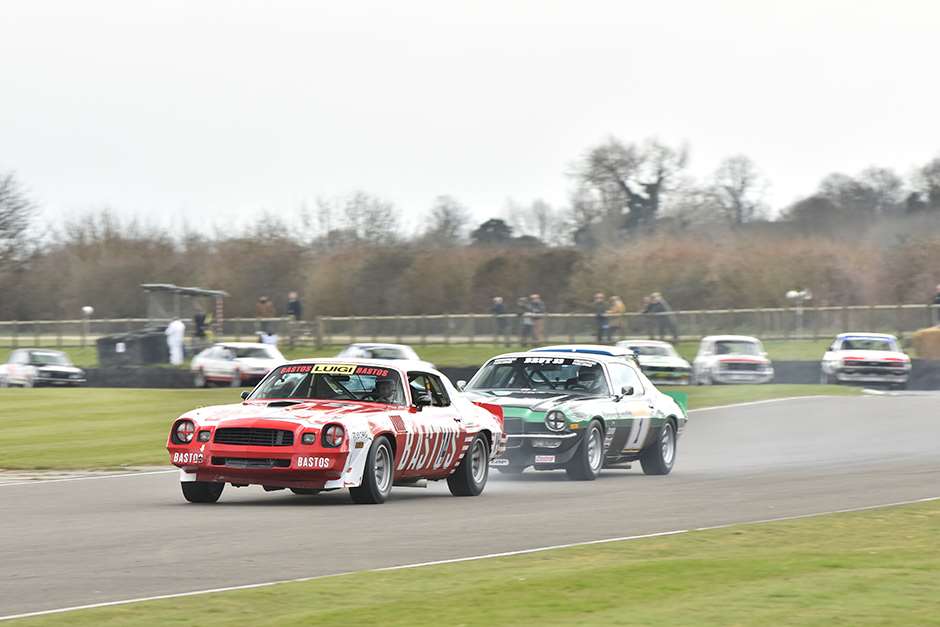 The weekend kicked off with the big (and in some cases not so big) saloons of the Gerry Marshall Trophy. Watch out for the efforts of Nick Swift in his little Mini, taking the fight to the big boys out front.

The Formula Junior cars of the Taylor Trophy put on an exciting show in the second race of the weekend, with wheel-to-wheel action throughout the race that was eventually won by Andrew Wilkinson’s Lynx-Ford.

The sportscars of the Graham Hill Trophy were the last to take to the track on the first day of the 73rd Members’ Meeting. Racing into the dark the AC Cobras and E-Types fought it out in an exciting half hour race, and it would be team captain Emanuele Pirro who would take the victory.

The British sports and GT cars from the 1960s added some homegrown heroics to day two, with constant close racing through the field. After battling his way through the field it was Chris Ryan’s MG B ‘ Le Mans’ that clinched victory.

The ’50s saloon and sports cars may have been older than those in the Gerry Marshall trophy, but they weren’t putting up any less of a fight. After a hard battle against some plucky opposition it would be Andy Wallace’s beautiful Jaguar Mk1 that clinched the win.

We won’t spoil the ending for you, but the F3 ‘screamers’ of the Derek Bell cup provided what must be the closest finish in Members’ Meeting history.

Former BTCC racer Andrew Jordan may have swept to victory in the race for early 911s and 901s, but the constant sideways action throughout the field made the John Aldington Trophy one of the 73MM highlights.

The gorgeous, elegant, pre-war racers of the Earl Howe Trophy held nothing back in their battle for victory. Amongst the sideways action there was plenty of time off the track for many of the entrants.

As it turned out the big Gerry Marshall saloons were even more exciting in their second outing than the first. Our own Chris Harris was right in the mix s Nick Swift and Andrew Jordan’s plucky mini again took the fight to the bigger boys.

The mighty Can-Am cars blasted onto the circuit for a fast and furious race that included Nick Padmore’s amazing, record breaking lap, on his way to victory.

In memory of the legendary World Champion the front-engined, single-seater cars fought it out for the Hawthorne Trophy. While Barrie Baxter and his BRM took the fight to the leader it would be the Maserati 250F that came out on top.

Rounding off a stunning weekend’s racing were the gorgeous sportscars of the Salvadori cup, and it was a race for the Lister fans to savour.

Video: A Spy In The #73MM High-Airbox Paddock