The Wyedean Rally 2015 lasted four minutes and forty six seconds for me this year. This was my third attempt and continued my fiercely protected legacy of never finishing the event. This was, however, the first time driver-error called time on proceedings.

As ever, we began with spirits bursting at the seams and after the E30 has flown through scrutineering we convened at my local hostelry for a protein-only dinner and mineral-balanced soft beverages. The following morning I toddled the car back to service and waited for the start. A friendly Escort-driving chap in the same class as us came over and told us that the end of Stage One was very slippery and cars were falling off. I don’t ever recall in my many circuit racing years, any fellow competitor sharing valuable track knowledge with me. Maybe that’s what makes rallying different?

The older cars run way down the order on the Dean, after several dozen 1400s, and the stages can sometimes be a little chewed up, but it never really bothers me, I’m just there to have fun. But after heavy rain the day before, conditions sounded tricky. Myself and co-driver Bryn Pierce would take it easy and then build some speed as the day progressed. At least that’s what we thought would happen.

I don’t recall much of that first stage, bar the fact that I was struggling with the notes a little and was simply aiming to finish the thing.

Four days later I’ve had the chance to look at the footage and try to understand what the hell happened. First up, I broke the RHS steering arm and that’s why we couldn’t continue. How did I end up so wide on the exit of the turn? I’m pretty sure the claggy clay surface had filled the gaps between the tread blocks and the car just understeered off. If I’d been more aggressively sideways I would have avoided the front-axle push. So it was my fault.

Once we’d realised the car wasn’t moving, we were in the hands of the marshals. This was most interesting. There were two chaps with us, one bloke was directing traffic around the car – a completely thankless task given how many drivers didn’t slow down and the danger in which he had to place himself, the other guy, called Chris Woodhouse, helped us try and fix the car. He was the kind of bloke who not only cements your love of rallying but gives you faith in the human race. As I stomped around swearing at myself, Chris gave me some space. I doubt I needed much reading to understand that I was worth avoiding for a few minutes, and I don’t really know what I was doing during that period of utmost rage, but I do know that he didn’t pester me.

Then he made several very helpful suggestions as to how we might move the car. Whereupon he started digging around in the mud to see what would be possible. Before grabbing the jack and seeing if he could get at the broken parts or find a way of fixing the wheel at the straight ahead so we might be able to hobble the remaining mile and fix the car.

Sadly nothing worked, but the happy, friendly way he went about helping us left a lasting impression. 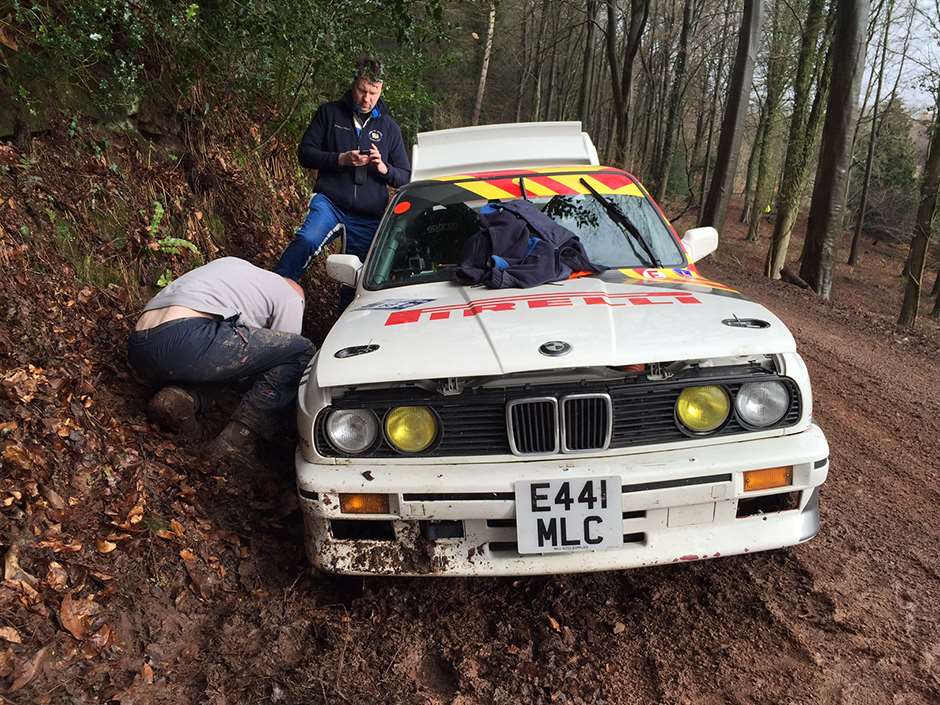 When we did get the car towed by a chap in a Volvo estate, he went a bit too quickly and probably forgot the bit where I said ‘it doesn’t steer’ and the car nearly rolled off a steep bank which would have destroyed it, and the un-belted, un-helmeted me and Bryn. This left the car in a very bad position. Eventually, some chaps with winches dragged it free and we managed to get it on a trailer and dragged it back to service.

It certainly wasn’t the rally I’d wanted, and I need to get back out soontime to avoid any dark thoughts like the ones that had me screaming ‘I’m never driving a rally car again’.