It was the kind of ‘phone call that all historic racing enthusiasts dream of: ‘Would you like to come along and watch the W125 make it’s first on-track appearance?’ asked Malcolm Gerrish of fabled engineering firm Crosthwaite and Gardiner. It was such a no-brainer that it almost felt like a trick question.

When we arrived at Donington Park and saw the car there, sat in a scrutineering bay with a device slung under the sump warming up the oil it all became very real, very quickly. We went and stood next to it, taking in the majesty of the thing. ‘Unsurpassable engineering. This is as good as you can get’ says Malcolm of the W125. Do not misinterpret this as arrogance though, more a measure of the confidence Crosthwaite and Gardiner has in its work. 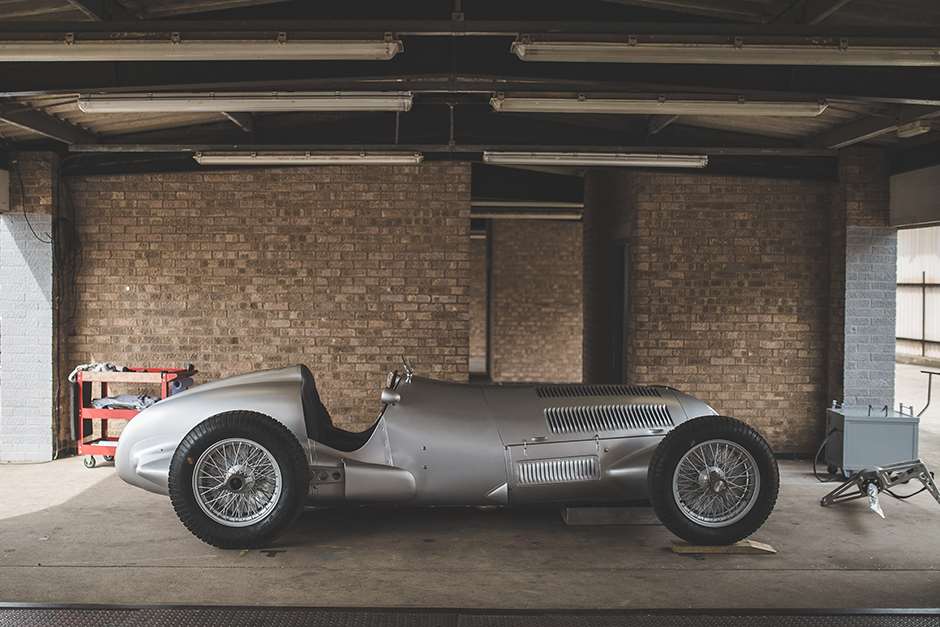 To have been there when the mighty straight-eight fired-up was to feel like a scared mammal in the presence of something prehistoric that could swallow it whole, but in a good way. It produces a resonance you don’t get from V8s or straight-sixes. It’s almost blood-curdling; it goes right through you and we couldn’t get enough of it. With a set of ‘soft’ spark plugs fitted the W125 was fired-up from cold and run for a few minutes before being switched off and having a set of ‘hard’ plugs fitted for on-track driving duty. The smell of methanol as the car pulled out of the scrutineering bay and on to the pit lane (which, ironically, was full of Formula E cars) brought to mind the field of cars that included W125s and Auto Unions when they took to the same circuit almost eighty years ago.

The story behind this car goes back to when a young Tom Wheatcroft visited the Donington Grand Prix in 1937, saw the Mercedes-Benz W125s running and fell in love with both the cars and the venue. He went on to realise his ambition of owning the racing circuit and established an incredible and very famous collection of former Grand Prix cars in the process. What he didn’t have however, was a W125. 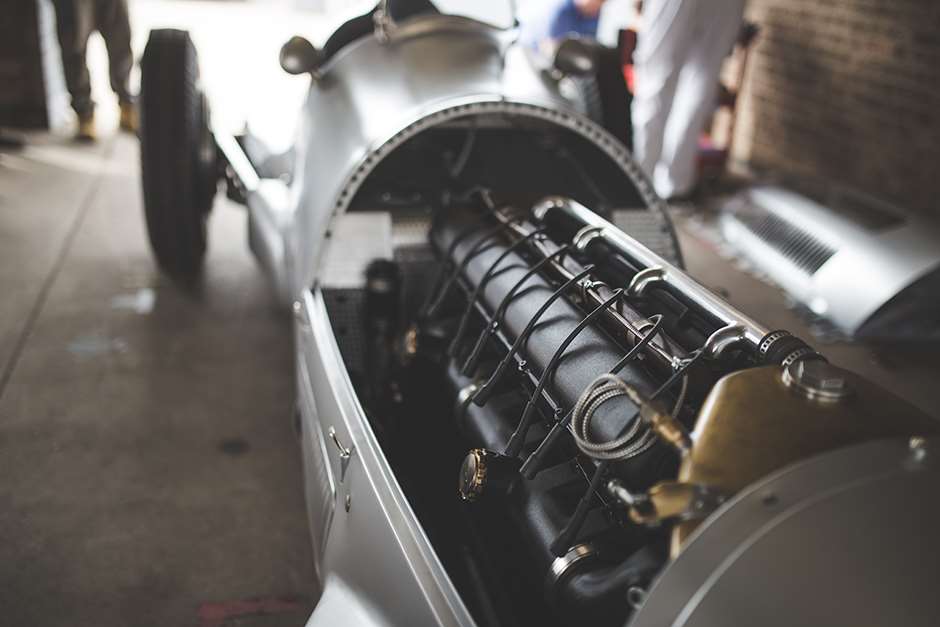 With none of the original cars ever likely to become available to buy, Mr Wheatcroft turned to Crosthwaite and Gardiner and ordered six unsanctioned replicas to be built. So, armed with eight folders of drawings, as well as access to an original car, wooden patterns and archive photos, they went to work. ‘We’ve completed four of the six cars now’ Malcolm explains ‘and can account for 18,000 man hours in each.’ That’ll be four cars delivered in 11 years, then. ‘The crankshaft was possibly the hardest part to make. ‘We thought “how on earth are we going to make that?” but then we considered the engineering know-how of the Thirties and thought: “Hang on, how on earth did they make them back in the day? We had to manufacture a lot of tools… ‘ 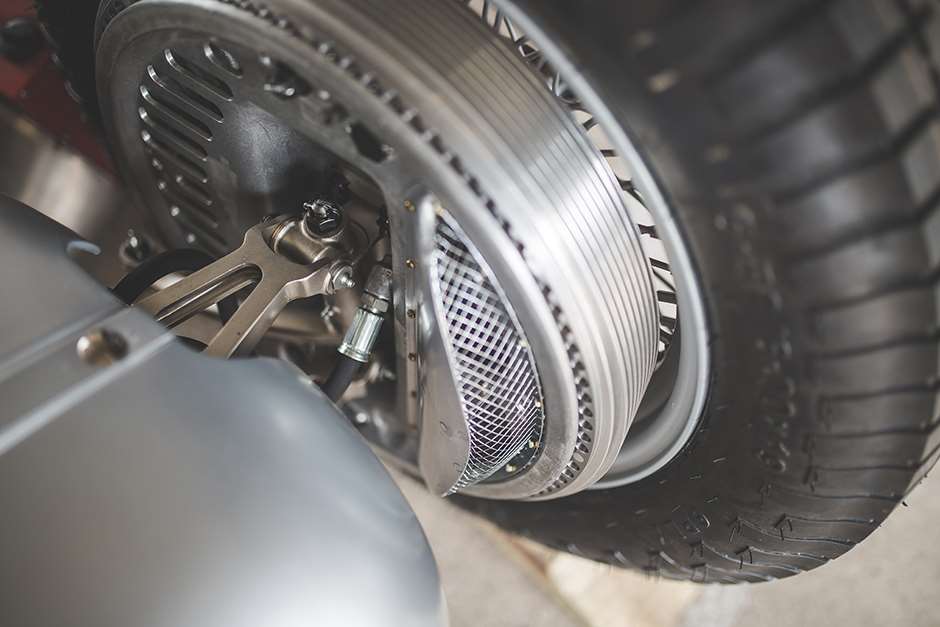 The first machine was completed 11 years ago and delivered to Donington. ‘Dad was down to working just a few hours a day at that stage’ explains his son and current owner of Donington Park, Kevin Wheatcroft, ‘but the day the W125 turned up he worked 12 hours!’ That day the car was driven by expert historic racer Rob Hall, of whom it is said didn’t want to get out of the car but, when he finally did said ‘I didn’t realise the straights were so short…’

That last comment is a nod to the car’s astonishing power output. Not until the original turbo era of the early eighties did Grand Prix cars have power to match the W125s, which were rated at around 650bhp. Malcolm Gerrish again: ‘We don’t test our motors for peak horsepower and only took this one to 4,500rpm on the dyno, but up to that point the power curve matched the factory’s original graph perfectly. We did however see a peak torque figure of 650lb-ft at 2,700rpm though.’ Gulp. 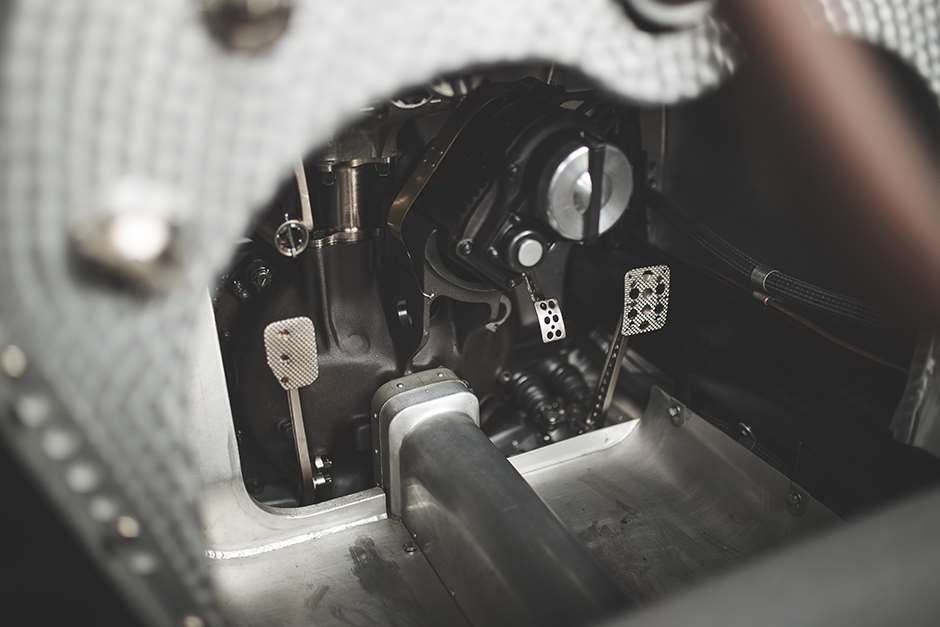 Sadly Tom Wheatcroft passed away just two months after the first car was delivered. Kevin was undeterred though and committed to seeing the order completed. ‘It was a much bigger task than we first thought’ he admits ‘but Crosthwaite and Gardiner couldn’t have done a better job. I’ve driven V16 BRMs and so on, but this is just phenomenal! All that power … I’ve driven four of these now and they’re all capable of catching you out, but they seem to get better and better. They can light up the tyres in the dry at any speed and in any gear’

Kevin’s assertion would appear to be fully justified. Before Donington this, the latest W125, had barely run a quarter of a mile just to make sure that it ran correctly and engaged all its gears, which makes it all the more impressive that it ran a total of eleven laps driven quite hard by three different drivers and there was not so much as one cough or splutter; just a straight-eight howl to rival just about any engine noise ever made. No niggles, no teething issues. Nothing. We’ll see if we can rustle up a short video clip to back up our assertion, but meanwhile you can see a full mega-gallery of stunning photos from Donington at the top of the page. 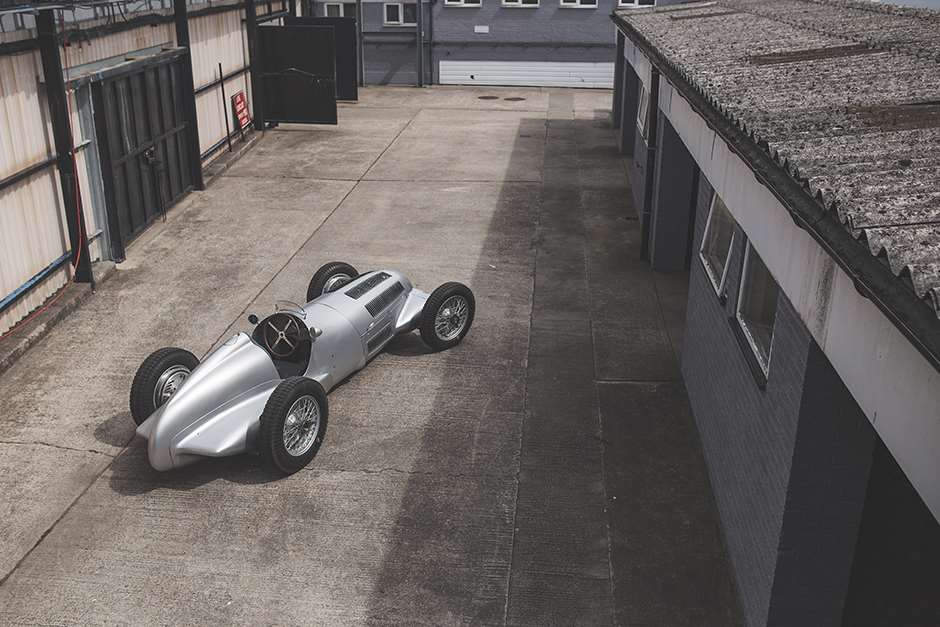 Before we left there was a brief chance to take to Donington’s famous curves with the W125 for photographic purposes. We circulated at modest speed which allowed us to snap the W125 each time it sped past. Nothing we’ve encountered has presence like one of these machines. It’s fearsome howl was never fully out of earshot and by the time it got to within about half a mile of our camera car we were overcome with a primordial fear. When it arrived in our mirrors and momentarily halted its charge in the name of photography we became acutely aware that – for those brief moments – we were the luckiest car enthusiasts on the planet, except of course for the pilot! How many people can say their mirrors have been full of a W125 which then proceeded to treat us to the awesome spectacle of seeing it accelerate away on its Dunlop Historical tyres? Sensational.

We’ll leave it to Malcolm to sum up the W125. He says: ‘The original cars were a defining moment of motor racing folklore and nothing we have made is more astounding than the car you see before you…’ If you want to understand the power of that statement, take a minute to browse Crosthwaite and Gardiner’s website to see what other work they do. How will they follow-up this enormous project? We asked Kevin if a W154 might be on the cards. ‘I wouldn’t rule it out…’ came the reply. Watch this space.

With the test a resounding success the car was transported to the Donington Grand Prix Collection where, for a short while at least, it will be on display.