We are on course to witness a feast of more than 30 of these aerodynamic-suction-inducing projectiles out there on the 2.4-mile Motor Circuit, including every model of ground effect Lotus, Ferrari 312T5, Williams FW07 and FW08, Brabham BT49C, and McLaren MP4, backed up by many such lesser-known marques as Ensign, Fittipaldi, Osella and Wolf.

This technology and the performance boost it provided, nearly all came about after Goodwood’s frontline period, which of course had ended over a decade earlier, in 1966. But the aerodynamic foundation extends much further back in time, to at least the 1730s…

The defining technology evolved – in part – from the work of Dutch-Swiss mathematician and physicist, Daniel Bernoulli. In 1738 he published what became known as Bernoulli’s Principle – an increase in flow-speed of a fluid will coincide with a simultaneous decrease in that fluid’s pressure.

The air around us is a fluid, and if an airstream is introduced into a narrowing, but otherwise open-ended tube or tunnel – a venturi – it is accelerated. As Bernoulli’s Principle describes, its pressure will indeed fall. It is why the venturi throat of a carburettor sucks in fuel mixture. Into the 1960s, some lateral-thinking – most notably American – engineers had begun investigating how this principle might apply to racing cars per se. Chevrolet R&D had worked with Jim Hall of Chaparral Cars to produce an ‘inverted airfoil’ body shape (in side elevation). It had upswept undersides at nose and tail to form what looked like half a venturi tunnel between the car’s apparently sagging but in fact carefully curved underside and the level roadway underneath. The car’s passage through the air should cause airflow to accelerate beneath the car. That airflow would consequently diminish in pressure and so suck that car down against the road. That suction – or ‘downforce’ – would instantly enhance traction and cornering grip.

At least, that’s what the GM/Chaparral guys thought would happen. But at 120mph the car’s upturned nose just lifted the front wheels nearly off the ground. A massive nose air-dam was then fitted to exclude airflow. And halfway round Jim Hall’s first lap the front tyres were grinding their way through the bodywork. Had some form of skirting merely been suspended along each side of the car, to prevent aerodynamic infill rushing underneath the car to refill the low-pressure area, then things might have been different. By 1968-69 a young BRM technician named Peter Wright conceived a bolt-on wing-shaped section to mount each side of their conventionally slender cars’ fuselage. Peter’s boss Tony Rudd sanctioned a wind-tunnel test model of a full bodied ‘wing car’ but the project died when Tony moved to Lotus.

By 1975-77 Peter Wright had rejoined Tony Rudd at Lotus. He was testing F1 car shapes in model form in the Imperial College wind tunnel in Kensington. As his model’s frequently-modified sidepods began to wobble and deform, Peter suddenly realised that when they drooped closer to the moving-belt ground surface so his downforce load readings would spike. 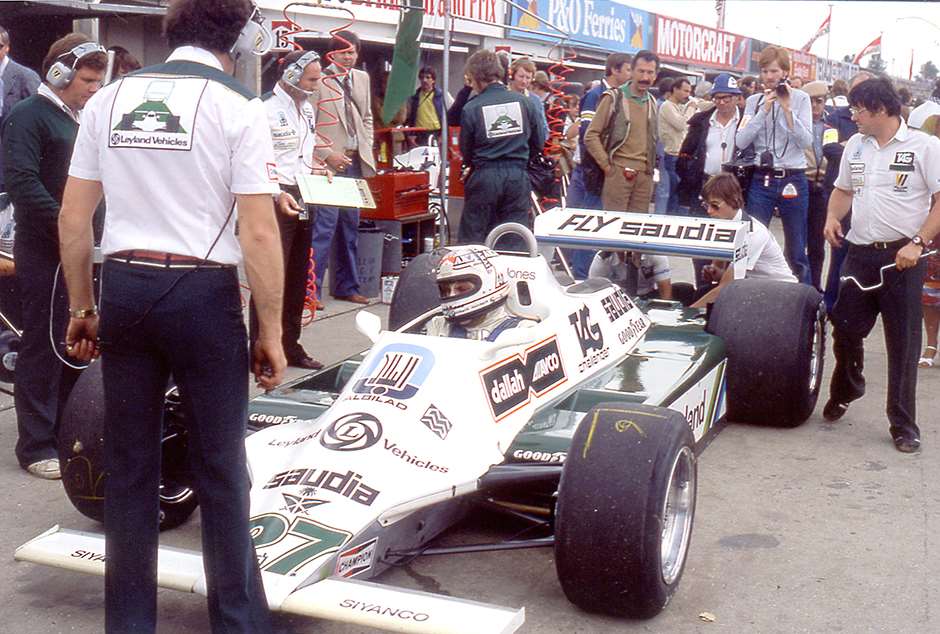 ‘That,’ Peter recalls, ‘was the Eureka moment. We realised that what was critical was the gap between underside and road surface, and if we could maintain that consistently we might really be on to something. We then realised that the trick was to exclude infill airflow from either side of the car so aerodynamic skirts were introduced.

‘The reduction of air pressure beneath our sidepod underfloors of course applied a force in all directions, so not only did it suck the car down, it also sucked in the skirts on each side. So in the sliding-skirt Formula 1 era from 1978-1980 it became vital to provide smooth, friction-free skirt travel, to prevent these skirts from binding in their guides.’

That is what they managed to achieve, producing the initial Lotus 78 for the 1977 World Championship season when team leader Mario Andretti described it as ‘feeling as if it’s painted on the road’. The more sophisticated true ground effect Lotus 79 followed in 1978. Mario won the Drivers’ Championship, while I believed team-mate Ronnie Peterson proved himself the standard-setting driver of the time. Once Team Lotus were running away with every Grand Prix – at least as long as unreliability (or driver errors) did not intrude – every other marque had to follow their lead. And so we entered the era of ground-effects cars being celebrated here at Goodwood ‘74’. Two hundred and fifty years after Daniel Bernoulli had pointed the way…