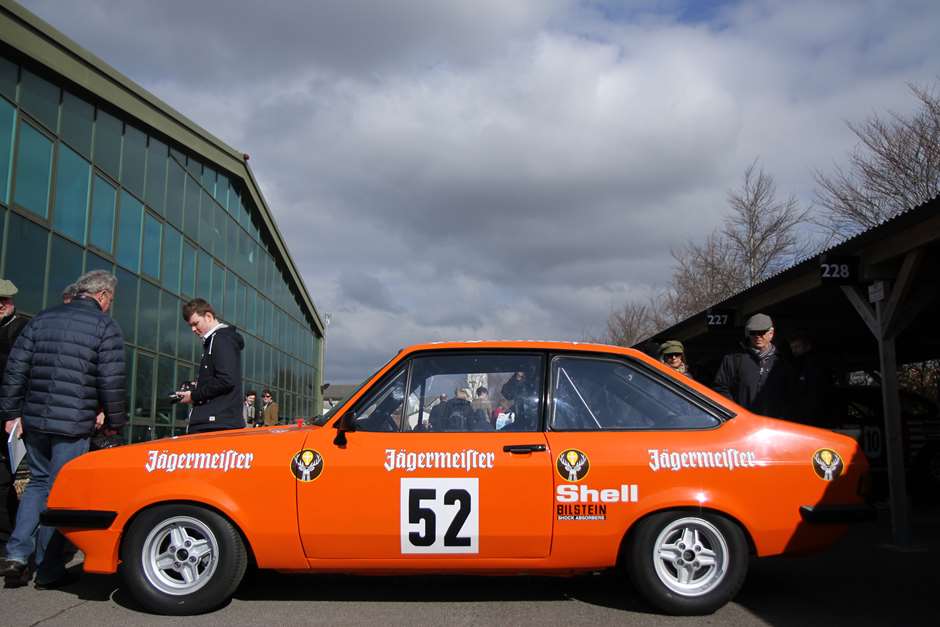 Mike Bell is obviously a man whose taste in cars pleases us. When we approached the stunning Jagermeister-liveried Ford Escort with a view to sharing it with you as a ‘Car that Rocks …’ it soon became clear that this was the very same Mike Bell whose Gilbern 1800GT caught our eye at last year’s Revival. The rather smart Escort he’s in at 73MM owes its existence to a German racer called Mario Ketterer. Herr Ketterer managed to secure some backing from Jagermeister in the late Seventies and soon convinced them to back a Mk2 Escort. The car was raced and hillclimbed with reasonable success before he took his herbal liqueur money and ran in the DTM in a BMW M3. The sight of the Escort in its distinctive livery had left an impression on Mike though, and he  remained determined to build his own. ‘I just love Escorts!’ he says with an infectious grin. ‘They’re so much fun to drive; without doubt one of the nicest handling cars of the period. In fact, my first ever new car was a Mk1 Escort Mexico; I wish I still had that one now! ‘ About five years ago Mike acquired the RS2000 you see here, although in his own words it was ‘a bit of a mess.’ Gradually he restored the body and kept saving up to make it into a full racer with FIA papers, finally turning up at Goodwood with the car in September last year for its first test day. Sadly it seized, which meant a new motor was in order… which Mike ran-in on the roads in Norfolk.’When I took it out on the road there just happened to be loads of police cars about; I can’t imagine what they must have thought!’ Sadly, the Escort doesn’t have enough power to feature towards the front of the field in the Gerry Marshall Trophy. In fact, Mike reckons that with Camaros and Rover SD1s out there a mid-field finish would be a good result. We reckon that with such stunning livery he can’t really lose.