Porsche works driver Marc Lieb on racing the 919 (and its drivers' manual!) Marc Lieb is, for my money, the most interesting story in what is now a nine-driver Le Mans Porsche 919 team. He began in the lower formulae and then graduated to Porsche’s Carrera Cup championship back in the 996 days. Since then he has been a stalwart Porsche man – moving up through the GT programme and becoming one of the Manthey Nürburgring legends on the way. It’s unusual for someone to make the switch from GT to prototypes at such a mature stage in their career, but clearly Porsche saw a talent that needed exploiting.

He wanders in looking like man who has spent too much time in a cramped cockpit, but smiling like he always does. He had a good winter break. What’s the main job for the next five days? ‘We are here making set-up. But we’ve just had a winter break and, with the LMP1 car, it takes a little longer to get up to speed. It’s always good to have the other drivers around, I’ve only had one year in LMP so I’m still learning, so we can overlay out laps with each other. Of course were here to give our input to the team and make the car better and faster and stronger, but we also concentrate on ourselves.’

The car is an evolution (but completely new). Does it immediately feel different?

‘It feels like an evolution. But you do feel small areas where you think that’s a big improvement and some areas it doesn’t feel like anything but you can see it on the data. It’s a similar car to last year but improved. For example, we really wanted to have better braking – I went out and did three laps and immediately felt it was better than last year.’

Do you struggle to concentrate when you have so much seat time in one day?

‘Think I clocked 750km yesterday! If you sit 7 hours in a car then its just a long day, the last outing was not nice. But, it’s okay. It’s physically quite hard to drive – the g forces are much more than a normal racing car. But if you’re in the car all day it’s pretty tough. Tougher than Le Mans.’

On the physical challenge, talk us through the Brazil season finale last year. That looked like a 6-hour sprint race!

‘We were absolutely flat-out and with the new tarmac there we could push like qualifying every lap. Everyone was on a similar pace. The guy that made that Tarmac should surface every other track in the world! Just phenomenal. Everyone said it was brilliant and it was so much fun driving.’

Is the pressure to drive flat out in LMP1 a problem given that you have to share track with slower cars. Isn’t it the job of the fast cars not to hit the slower cars?

‘It’s very difficult. One problem is the speed difference. We are a lot quicker in acceleration, we are a little slower in the turns than the old P1 cars, but that’s why we’re so quick in the straights. It’s really difficult to judge sometimes if you come across a GT car with 60kmh more speed and the guy sees you in the mirror 200m behind you. Next half a second you’re there and he doesn’t know if you’re going right or left. Brazil was a tough race, the track is narrow, you had to take risks – you had to balance the risk the whole time. In my second stint, I felt so bad because I made so many mistakes, but I wasn’t gaining or losing time to Anthony Davisdon. After the race I said to him “I made so many mistakes” and he said “Me too”. But when you hear the guy on the radio say ‘you just lost 2 sec in traffic’ you go for the risk.’ How often do you get that adrenal rush after a risky move – like ‘Phew, I got away with that one’?

‘In Sao Paulo, it was quite often,’ said with a sizeable grin.

Another F1 driver in the team this year. Surely you want to be faster than him!

‘Ah, it’s not just with Mark and Nico, we have bloody good and quick drivers in the team. Timo and Romain have so many years experience – Neel has lots of experience in prototypes and Brendon is very quick young Kiwi. I mean you just try not to be the slowest [in the dark at Le Mans last year, Marc was the quickest] but sometimes it is what it is. It always changes, over one lap, traffic, longer stints and it’s really interesting to see how it all works. Where else can share the data on the same car with five other really talented drivers? It’s really good. You can improve yourself, it’s brilliant. As a group we have a very good atmosphere, and that means a lot.’

What was it like getting back into a GT car for Daytona a few weeks back?

‘To be honest in Daytona for testing, the first two or three laps I felt like I was driving a boat! It was terrible! I was locking the brakes, I turned in and it felt like the car had broken suspension! But then it was all good.’

The one they made a model toy of, and the pictures of that model were leaked on the internet!

‘I think that the model toy looks really nice!’

The man is Porsche to the core. No way he’s causing trouble and speaking out-of-turn. And it really is Porsche that matters to Marc. I ask him if the cars are free to race each other and he says they are, but there have to be some rules and that ultimately all that matters is Porsche winning. Which one doesn’t come into it. I suspect among his teammates, he feels this the strongest.

A geeky differential question now – with a 4WD machine than can run 2WD and has so much torque, the diffs must need lots of set-up?

‘Pre-season, quite a lot. Once into the season not much. It’s a fixed mechanical diff at the rear. But we have so much influence from the front diff too – you can have it spin in inside front wheel and destroy the tyre, or it can give understeer, it’s not so easy – we’re still learning that and there’s a lot more potential in the car. You have to understand if the problem coming from the rear of the car or the front and its really not always easy to know. Good data guys can see this though – you won’t believe how much data these cars produce. Sometimes it’s too much data, but they do a great job to make it work.’

And then just before he leaves, he drops the most perfect little bit of inside knowledge. I ask him if the steering wheel is the same as last year’s:

‘Mostly, just a few changes. We have some input from Mark, they’ve been using these complicate wheels in F1 for some time. It’s a lot better. We practice out of the car – and you’re given a 25-page driver manual which shows you how to go from 2WD to 4WD, it’s all in the book. You have to learn it, and it has to be quick.’

The 919 Hybrid comes with a drivers’ manual. How cool is that? 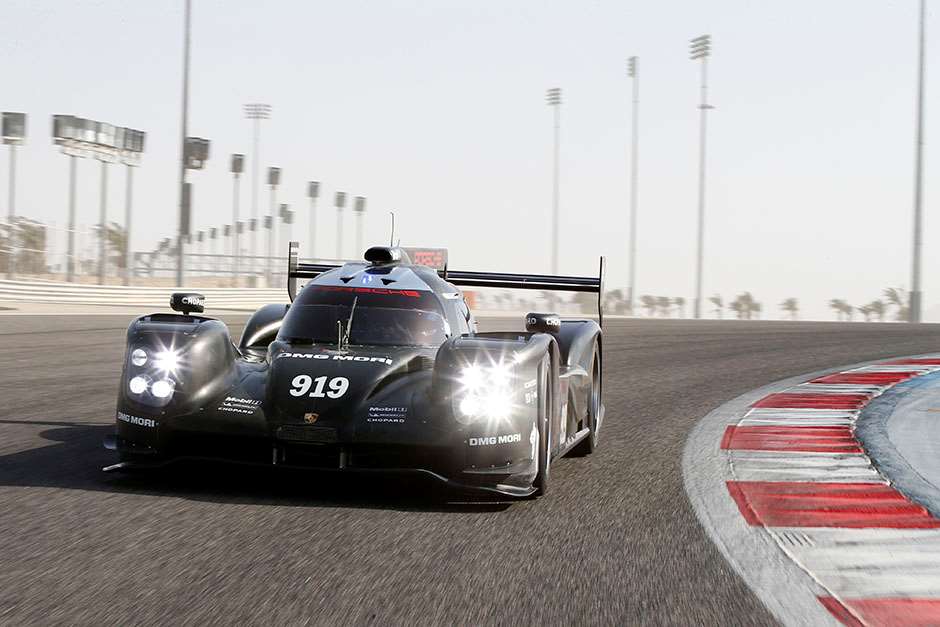