Audi RS5 TDI Concept driven... can a diesel really be a true RS? 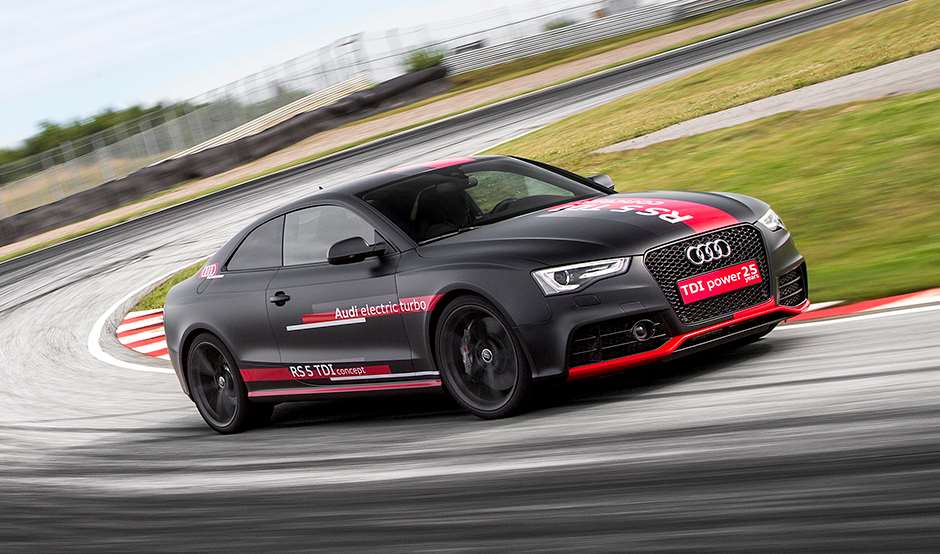 Lining up to drag race against an Audi RS6 Avant would be daunting at the best of times. Doing so in an RS5 would bring some solace, but this particular car is in fact 65bhp down in power compared to a standard RS5 and – and it’s fuelled by diesel. A 173bhp deficit is just going to be plain silly, right?

As the flag drops, both Quattro systems distribute grip and limit the expected pomp and ceremony to mere chirps from the tyres. Both S tronic transmissions shuffle through the cogs like a Las Vegas croupier and it is only as we pass 70mph that the RS6 begins to edge away. I blink first and hit the brakes as the RS6 has the racing line into the corner, but it was a lot closer than I would have wagered.

This particular Renn Sport is in fact the RS5 TDI Concept – a diesel-powered version of the potent coupé that, thanks to high pressure piezo injectors and clever turbocharging technology, churns out a very impressive 553lb ft of torque. So much torque, in fact, that while being driven hard on track the Quattro system was struggling to put it all down.

So, what’s behind it all? Audi engineers have developed a new turbocharging process whereby a separate 48-volt electrical system (supplied by a boot-mounted compact lithium ion battery) powers a compressor that can reach maximum speed in a quarter of a second. It sits downstream of the intercooler and so, at very low engine speeds (and therefore low exhaust gas pressure), a bypass valve closes and re-routes the air to the electric compressor, which in turn provides additional boost and fills the gap where the driver would normally experience turbo lag. Not only does this system enable the car to feel incredibly rapid from a standing start, it can also fill in the minute dips in power during gearchanges, giving the car a much fuller torque curve. Such is the extent of this, that Audi claims the acceleration time from 40 to 75mph in sixth gear drops from 13.7 to just 8.3 seconds. Even with diesel power the sound from the cabin, although different, is every bit as interesting as one would experience in the conventional petrol-powered RS5. That’s partly thanks to some exhaust system trickery, as well as a little sound augmentation. We know it’s not totally real, but when it sounds this good, should we care? Sheer performance is every bit as impressive, and it delivers slightly better turn-in thanks to a smaller and lighter engine in the front. And despite having to carry an additional battery in the rear to power the 48-volt system, the higher voltage allows for lower currents meaning smaller cable cross-sections, which go some way towards negating the battery weight.

Some purists will, understandably, be hugely opposed to the mere thought of a diesel-powered RS model, but given the brand’s utter dominance in the world of endurance racing – with diesel power – it was always going to be just a matter of time before this technology would begin to trickle down into the performance road car range. What makes the RS5 TDI such an interesting concept is that you never really feel like you’re driving a diesel-powered car, merely one that is impressively rapid point-to-point. And as an added bonus, the ability to do so with a greatly reduced fuel bill. It may remain just a concept for now, but even after a brief amount of time behind the wheel a diesel-fuelled Audi RS model suddenly feels far less of a silly idea. As does racing RS6s…