The lines between a hot hatch and something significantly more expensive are becoming more and more blurred in these crossover-filled days.

Volkswagen‘s latest uber-hot Golf is one such car, straddling the gap between standard hot-hatch and ‘mega-hatches’. The Golf R, as it’s badged, is tricky to define. It has 295bhp – not quite as much as the likes of the BMW M235i (which we drove earlier this year) or bonkers Mercedes-Benz A45 AMG – but costs around £30,000 (£31,475 for the five-door you see here), significantly less than its more powerful rivals.

That makes the R an enticing prospect: not hideously expensive, and not so brash you’d feel embarrassed going to Tesco in it. For just a £4,000 premium over the GTI you get a six-speed manual ‘box (you can upgrade to the DSG auto for around £1,400) a beautifully turned-out cabin, quad exhausts and some styling tweaks taken straight from the bigger Scirocco R.

Under the bonnet is a four-cylinder, turbo-charged engine. It’s the same motor as found in the GTI, but with an extra 79bhp squeezed out, dropping the 0-62 time to just 5.1 seconds (4.9 with the double-clutch auto).

‘Keep the settings in normal mode and the Golf soaked up the worst that the Welsh roads and tracks threw at us.’

The cabin is exactly what you expect from Volkswagen. It’s beautifully put together, with well designed switchgear and a 6.5-inch infotainment system now also found on the big-brother Passat. It’s an intuitive system to use.

Slip inside and you will find a pair of the best driving seats in the game, able to find that happy and all-important medium of comfort and security. There’s a satisfyingly chunky wheel and beautifully designed dials, complete with flashes of blue to remind you that you’re in the R (and matching the blue lighting along the door trim and sills). 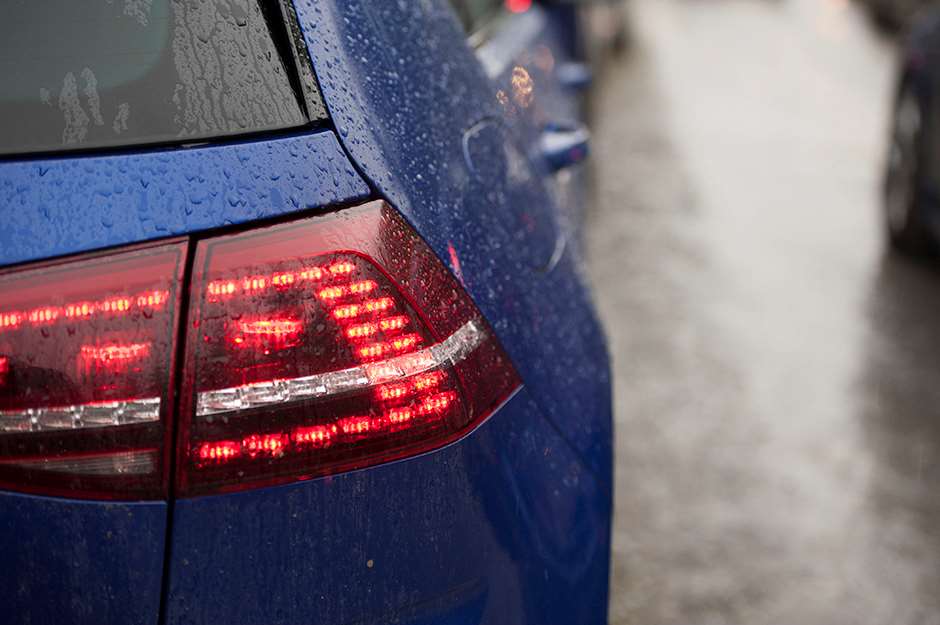 The most important thing about a car like this will always be how it drives. And this is where the R really stands out. Plant your foot and the turbo spools up rapidly, rocketing you forward thanks to the excellent traction.

With four-wheel-drive you expect a little understeer, but if it’s there we didn’t notice it. Instead the Golf eats up each corner with grip levels almost unheard of in a hot hatch. Keep the settings in normal mode (Race becomes too jarring after a lengthy period) and the Golf soaked up the worst that the Welsh roads and tracks could throw at us. The steering is weighted brilliantly, which makes the Golf an effortless machine to drive fast.

With a lower price than its rivals, brilliant drive, and subtle, yet well defined, styling the Golf really has laid down a marker to other manufacturers, including some within its own group, that it isn’t prepared to give up its hot-hatch crown lightly.