The specification of the new Porsche 911 GT3 RS has been known for some time, but for those of you who struggle to retain numbers, here are the basics once more.

Using the wider, heavier body from the turbo, the RS still manages to be 10kg lighter than the narrower, much smaller-wheeled 991 GT3. It manages this by way of a magnesium roof (first seen in the 997 Hybrid racer of 2010) and carbonfibre front wings, bonnet and rear deck lid. Owners can go lighter still by deleting the hi-fi, buying a lithium battery and taking the fixed-back carbon seats. Optional carbon ceramic brakes will shave weight too. How many of these options are needed to hit the claimed 1,420kg I do not know, but I can tell you that not since the 1967 911 R has a road going Porsche been treated to such extreme weight-saving measures.

The new engine displaces four litres and produces 500hp at 8,250rpm and 339lb ft at 6,250. A new crankshaft and intake system make it a quite different motor to the 3.8 in the ‘normal’ GT3. Claimed performance is very brisk and delivered through a standard dual-clutch transmission, which has slightly different ratios to accommodate the huge 21-inch rear wheels. Zero to 60mph takes 3.1sec, 100 is dispatched in 7.1sec and 125mph flashes by in 10.9sec. Like me, you probably never thought a normally aspirated 911 could produce such numbers. Top speed is 193mph, which is impressive given how much wing the RS presents. 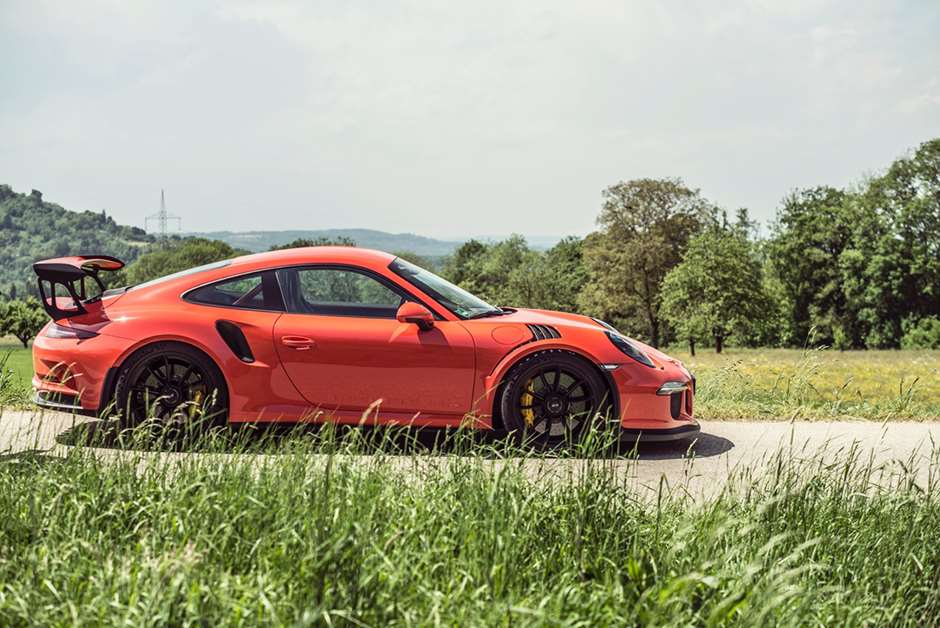 The aero package is extreme; it’s the single biggest area of performance improvement over the 997 machines, and it has been achieved through good old wings ‘n splitters. That big chin works in conjunction with the front wing vents to produce 30 percent more front axle downforce, and the rear wing is simply huge for a production machine. Porsche claims it has twice the downforce of the old RS, which is one of those throwaway claims I’m loathed to repeat here, but I tend to judge such things on how be-winged a car looks, and the RS does appear to have taken a wrong turn from a Blancpain race.

And then you drive it on the road and realise that Porsche no longer makes cars that cannot behave on the public highway. For the first few minutes the RS’s good manners serve as a profound disappointment because you’ve read about the 500hp and the lightweight everything and you’ve seen the preposterous wings and, well, it doesn’t seem much more hardcore than the 991 GTS I left at the airport. In fact – that at least had three pedals. 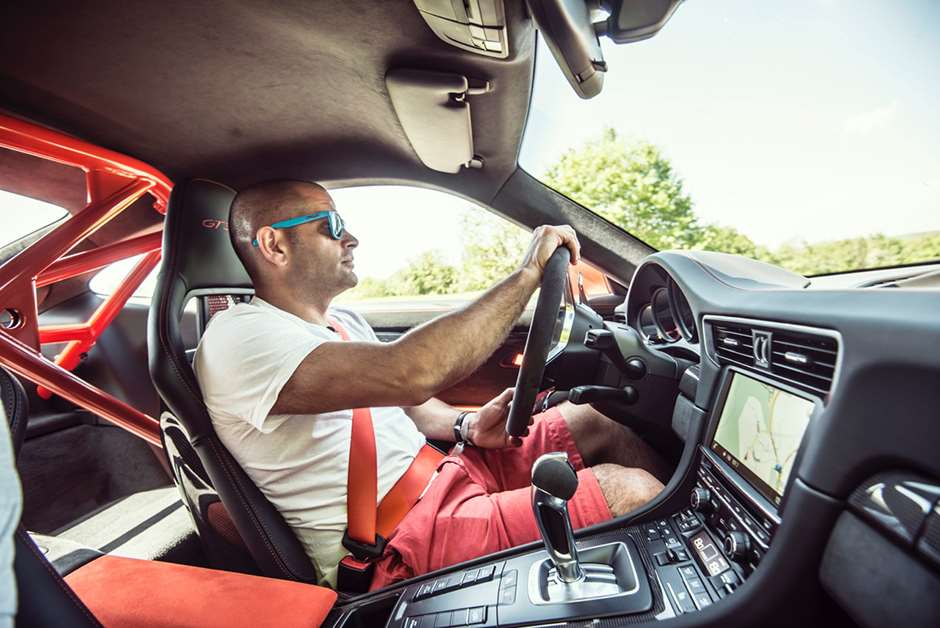 The first time you give the car space it makes you feel very guilty for ever doubting it. People familiar with this type of machine will come away with two immediate impressions – the first is the level of grip across both axles. The 911 GT3 RS uses a 265 section front tyre, so wide it actually caused several headaches during approval, and that, coupled with the 991’s longer wheelbase, means it both turns and maintains front axle grip in a way no 911 has before. The front Michelin Cup 2 rubber has a field day. At the rear there’s a 325 section, 21 inch equivalent – it is so sticky that on the road, dare I say it, the car feels almost over-tyred. In the dry you can ping from quite tight second gear turns using full throttle.

The motor is so good that that it slightly defies description. This is the epitome of the normally aspirated flat-six. It works from 2,500rpm to 8,500rpm, it pulls way harder in the mid-range than the 3.8 and it does so with the full panoply of wail, warble and pizazz you would expect. You find yourself snicking up and down the paddles just to hear it make a slightly different noise each time. Making it lug in higher gears from low revs is especially pleasing. Paddles only? Suppose I’ll just have to get over myself. This is the best dual-clutch I’ve driven for speed and response, the paddle clicks are a little shorter than on the GT3 too, but I’d still rather have a manual. 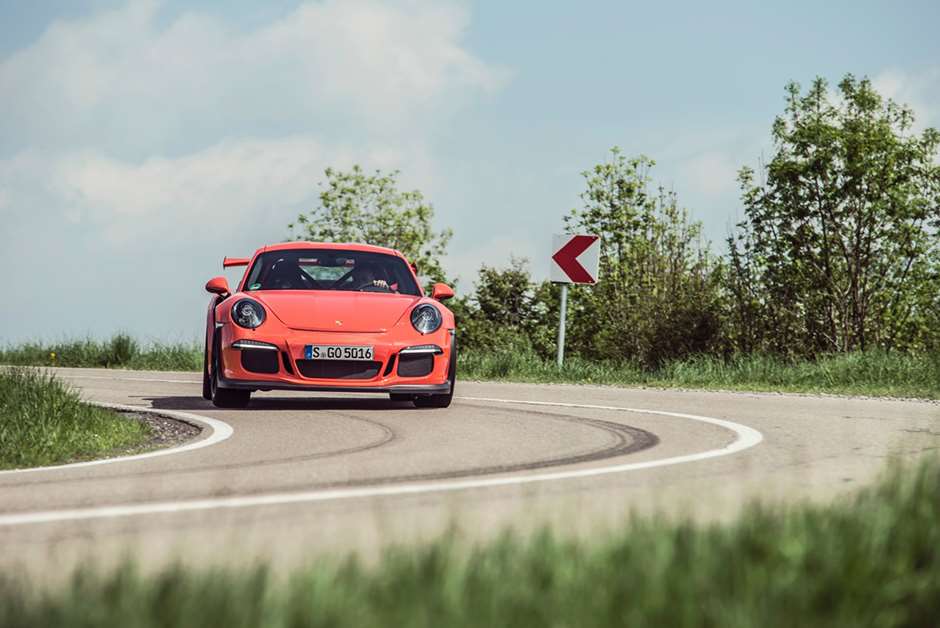 The main downside to the GT3 RS’s superb road manners – it even rides pretty well – is its width. The Turbo body allows for a much more efficient intake set-up, but it also makes the car very wide even on German roads. Back in the UK, this car will make you wince on fast B-roads. And that’s taking into account the big increase in agility afforded by the rear-axle steering it shares with the base GT3. Without that system, the car would feel huge.

It will come as no surprise to learn that it feels even better on track. It’s the front axle that makes you giggle – here at last is a fast 911 that doesn’t want to push the moment you suggest turning into a corner. It simply goes. Entry speeds are way higher than on a 997 generation car. In fact, Porsche claims a sub 7 min 20sec lap of the Nurburgring in this car, which isn’t much quicker than the last 4.0 GT3 RS, but on a conventional circuit I think it would be miles faster. 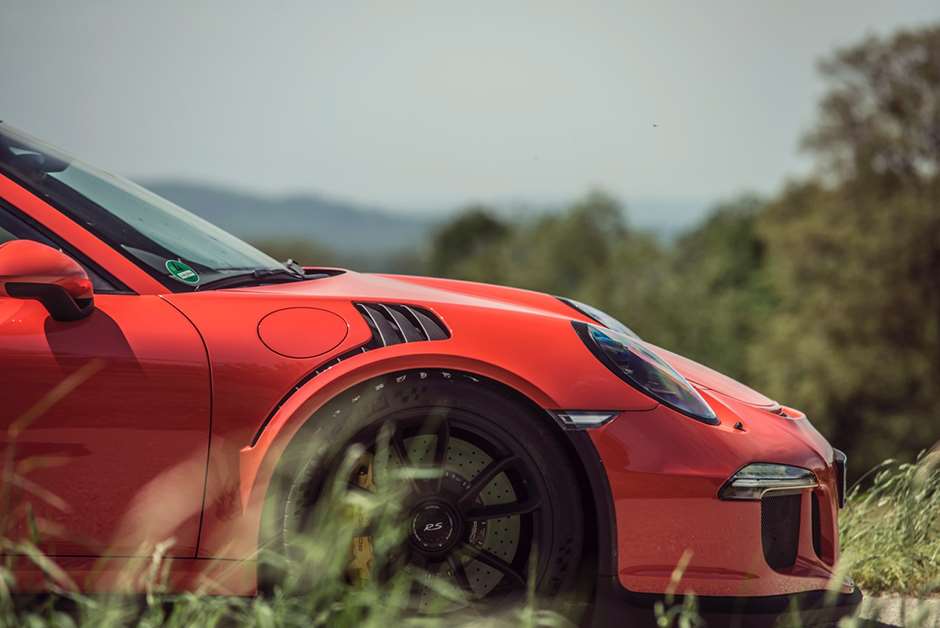 You can ride up against all the front grip and hold the line, then use those enormous rear tyres, taken without change from the 918, and carry even more speed away from the exit. The bit in between is entirely at the driver’s disposal – with the systems on you can be neat and tidy, with them off you can use that rearward mass to rotate the GT3 RS and pull big, smokey slides. I have driven every fast 911 of note, and the GT3 RS is the most predictable of all on a trailing throttle. You find yourself switching all the electronics off and letting it back itself into second gear turns – and it has a 325 rear!

The GT3 RS test car was running the optional 410/390mm carbon ceramic brakes and they were immense. Pedal feel was strong and it never lengthened – I just couldn’t fathom some of the braking distances from high speed. And the downforce? I was at Weissach, Porsche’s test track, and there just aren’t enough fast turns to give you any real idea of high speed cornering. What I can say is that on the Autobahn the car hit 185mph with some ease, but the next 5 mph were a struggle, and this is a sure sign of real downforce. 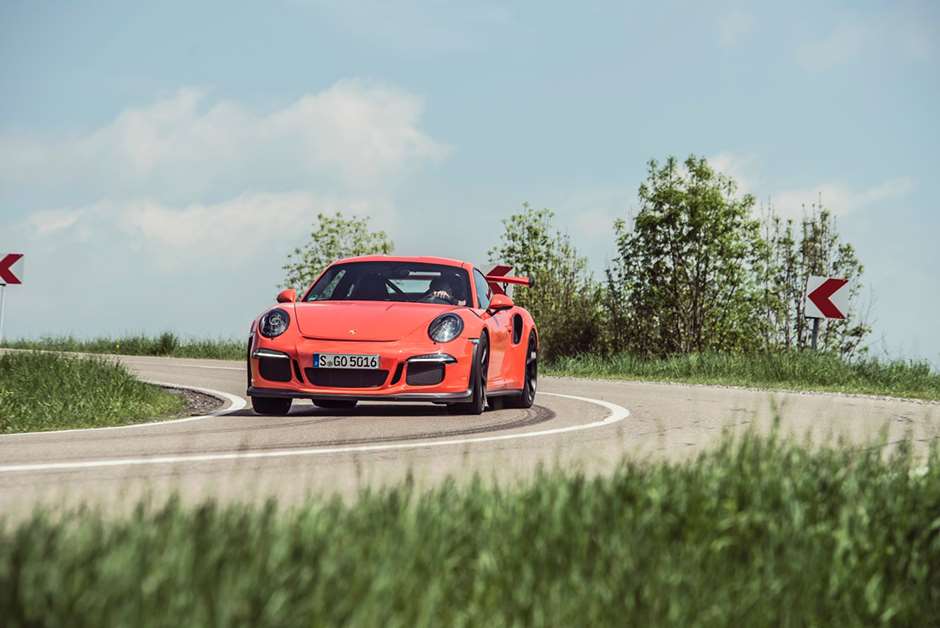 Furthermore, it leaves me with a little gap in my knowledge of the new GT3 RS, which means I will be forced to reacquaint myself with it very soon. All in the name of research.

Some people will detest everything this car stands for. Some will dwell on the lack of a manual gearshift. But the unavoidable truth is that; for people who have the resources and inclination to want a car that is equally happy crossing continents as it is lapping at very high speed, the 991 GT3 RS sets new standards.