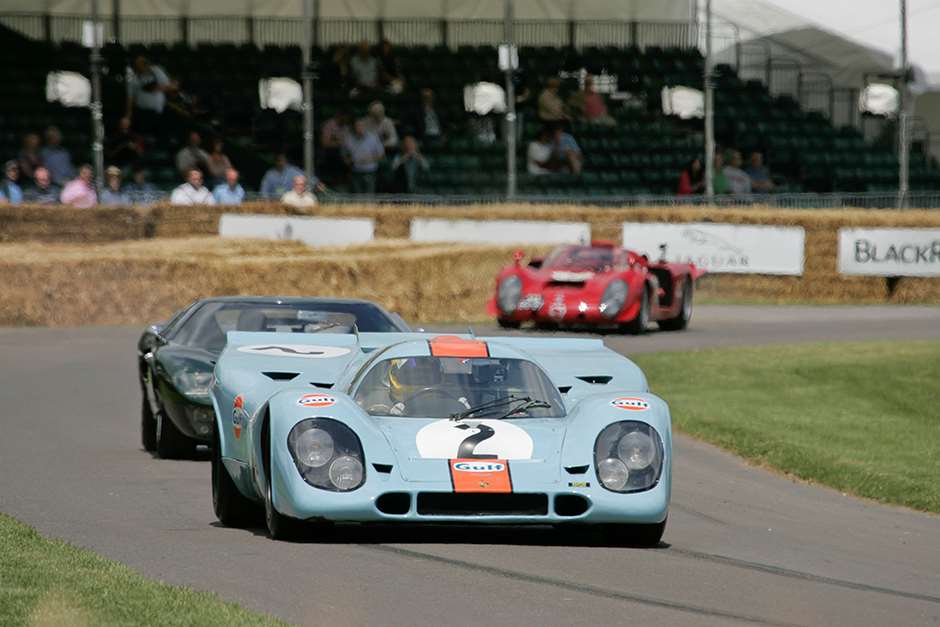 One of the most famous Porsche 917s built, the Gulf liveried 004/017 car run in period by JW Automotive, has just been offered for sale by its current owner Bruce Canepa. While the 917 is one of the most celebrated Porsche racing cars of all time, it didn’t look that way in its early days – and Slough based JW Automotive, run by John Wyer, was instrumental in its success.

The first 917 to finish a race came home in a lowly eighth place. It was the Nürburgring 1000km, and the race was dominated by the smaller Porsche 908s, which took the top five places.

It was during a later test session at the Osterreichring that things would change for the 917. JW’s chief engineer John Horsman notice that pattern of dead bugs on the car missed the long tail; that meant there was no air in contact with that part of the car, and therefore no downforce.

Horsman improvised a shorter tail for the car made from aluminium sheet and tape. Brian Redman tested it, returning to the paddock to declaring: ‘Now it’s a racing car.’ The 917K was born, the K denoting Kurzheck – short tail.

In December 1969, the first chassis arrived at the JW Automotive workshop in the UK. It was 004, modified to 917K specification a month earlier by Porsche. The following February, Wyer’s 917Ks finished in first and second place at the Daytona 24-hour, smashing the previous distance record by 190 miles in the process. The 917 had arrived.

At a very wet Brands Hatch BOAC 1000km (see video below), 004 was hit by the Ferrari 512S of Chris Amon. The damage was enough to take it out of the race and, while repairable, it wouldn’t be ready for a race at Monza two weeks later. Instead, a new chassis was ordered and it was re-designated 004/017.

After its time with John Wyer, the car was sold to Australia’s Porsche importer Alan Hamilton in 1975 where it stayed until 1989. The next owner was David Piper – one of the drivers to finish the 917’s first race at the Nürburgring. He restored it to its Gulf livery and kept it for 10 years.

It then passed through a couple of owners before Porsche bought it in 2008 with the intention of restoring it. That’s when Bruce Canepa stepped in; he’d tried to buy the car previously but had missed out on it. He took it off Porsche’s hands to subject it to a no-expense-spared restoration. The car shown above is one of 004/017’s sister cars from the Festival of Speed, but a full gallery of the freshly restored car can be seen here at Autoweek. It’s for sale as Canepa has another 917 – number 017, which he says he will never sell.

Fancy buying one of motorsport’s most historically important cars? An offer of something more than $20m should secure it…