If you’re going to fairly consider the dynamic and mechanical merits of the revised MINI John Cooper Works Paceman, you need to square its unusual raison d’être with yourself first and foremost. We’re well aware the idea of a sporting coupé with all-wheel drive, jacked-up soft-roader looks and three doors mixes a lot of niches into one hard-to-swallow recipe. There are plenty of people out there who will summarily dismiss the Paceman long before ever swinging open one of its hefty doors and climbing in for a proper appraisal. Furthermore, you’re probably also surprised that a car that has been on sale little more than 18 months is already being tweaked and facelifted.

But there’s actually a lot to like about the quirky Sports Activity Vehicle (BMW’s term). MINI has become a phenomenally successful brand for BMW and has seen the sort of diversification from the modern take on Issigonis’ classic that has resulted in coupés with roofs modelled on back-to-front baseball caps, four-door variants with a suicide access portal that ejects passengers into traffic in right-hand drive markets and four-wheel drive versions. Short of a 21st century MINI Wildgoose, we’re not sure how many more model evolutions Cowley can squeeze out of the plain ol’ hatchback. 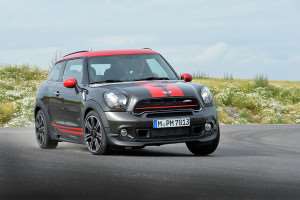 So, given the third generation Hatch has been revealed to the world, MINI has decided to spruce up both the Countryman and Paceman versions, which have been on sale since 2010 and late 2012 respectively. And boy, is it a minimal overhaul. Essentially, you’re talking about LED lights, a revised front grille, some primping of the bumpers and a few areas jazzed up for an interior that is still obviously second-gen MINI, not all-new and shiny like the new hatchback’s cabin. The exterior is love it or loathe it; there’s little more to say than that. For what it’s worth, in full JCW trim, it looks purposeful and not as ungainly as in the pictures. The real benefit is inside. This car is easily more capacious for four people and a bit of luggage too than the regular Hatch is. It’s not quite as cavernous as its Countryman sibling but it is arguably easier on the eye as a result, while it promises a lower centre-of-gravity for improved dynamics too.

Where it scores highly compared to the normal Cooper S is that it uses the old 1.6-litre turbocharged four-cylinder engine, rather than the 2.0-litre the Hatch now has. This means less weight over the nose and less weight over the nose means less understeer, although it will eventually show itself if you’re heavy-handed with the JCW. On 18-inch alloys with 45-section tyres, the Paceman proves a reasonably entertaining proposition with loads of grip. There’s plenty of bite to the 215bhp motor, the engine never struggling to move the 1,475kg JCW around, while it makes a decent noise under load. Revving it right out to the redline does cause the car to become a touch breathless and coarse but if you flick into Sport mode with the toggle switch at the bottom of the dash, you get crisper throttle response, heavier steering and some amusing overrun pops and bangs from the exhaust to compensate. Body control is largely excellent, admittedly with more roll into corners than a Hatch. Again, there’s a pay-off here in that the grip far exceeds that of front-drive MINIs. 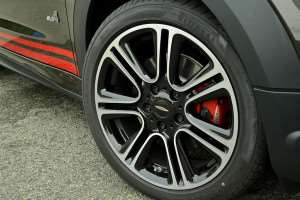 There has been some minor fettling of the engine so that both 0-62mph and top speed are improved upon, while emissions and economy are also better. The benchmark sprint drops 0.1- to 6.8 seconds, flat out it will go 2mph quicker than before at 142mph and it goes further on a gallon of fuel to the tune of 1.6mpg, MINI quoting 39.8mpg for the combined cycle. The big saver is CO2 emissions. Now kicking out just 165g/km, it’s enough of a drop from the 172g/km of the old car to see the Paceman squeeze into VED Band G by the skin of its teeth. The outcome? You’ll pay £110 less a year to tax it in its first year than before and you’ll also have an extra £25 in your pocket annually after that, the JCW a steady £180 for a 12-month tax disc.

Perhaps the biggest improvement to this revised Paceman presents itself in an area that can be considered largely subjective: refinement. MINI says it has beefed up the acoustic insulation on the JCW Paceman and we’re inclined to believe the maker. True, the launch event was on the largely flattering road surfaces of Scandinavia, in the countryside surrounding Malmö – most of which were billiard-table smooth. Still, the fact the Paceman never once jolted about or felt like it had a nervous secondary ride was a blessing, while wind noise was almost inaudible; not something you would believe looking at its chunky profile. It is simply tyre roar at higher speeds that intrudes into the cabin, but not at levels that would deafen.

OK, so it offers no extra driver interactivity over the Cooper S, but as that car is not as engaging as it once was, the Paceman’s quick ’n’ safe set-up is about as lively as you’re going to get from MINI right now. Which makes its extra cabin space, larger boot and tougher – if challenging – looks appealing. That this is also the quickest MINI on sale until a JCW Hatch or even a JCW GP3 model arrives only adds to the cachet, which perhaps explains the steep £29,440 entry ticket. But if you want one, all you’ve got to do is ignore the naysayers… of which, sadly, there will be plenty.