They do make 'em like they used to... just! GRR explores Land Rover's natural habitat

As Freddie March prepared to throw open the gates to the new Goodwood Motor Circuit in 1948, the Rover Car Company in Solihull was putting the final touches to a vehicle that would become another British automotive icon. Yes, 1948 was ‘also’ the launch year of the original Land Rover, and a recent GRR visit to Solihull revealed other parallels between Goodwood here in the South of England and Land Rover’s birthplace in the Midlands. We were both established in rolling English countryside, and there’s a definite ‘family’ spirit evident amongst the workforce at the Land Rover plant, where generations of locals have clocked-on at the facility.

So Goodwood’s rolling acres are still extant while most of Solihull is built over, and our generations go back an extra three centuries or so… But hey, who’s counting! The Solihull plant – known when new as Shadow Factory Number 2 – spent the war years producing aero engines for the RAF’s Bristol aircraft. Goodwood’s war-time association is well-known too, as our circuit follows the old perimeter road of RAF Westhampnett, a fighter station from whence brave members of ‘The Few’ took to the skies to do battle with the massed forces of the German Luftwaffe. After the war thoughts returned to things automotive here in West Sussex and in the Midlands. Shadow Factory Number 2 was acquired by Rover, along with the couple of neighbouring farms, and in subsequent years and in the hands of various corporate owners has grown to accommodate a sprawling plant which turns out Defenders, Discoverys and Range Rovers. It has most lately installed a new line for Jaguar’s entry-level XE saloon and, we’re told, boasts the biggest paint shop in Europe. 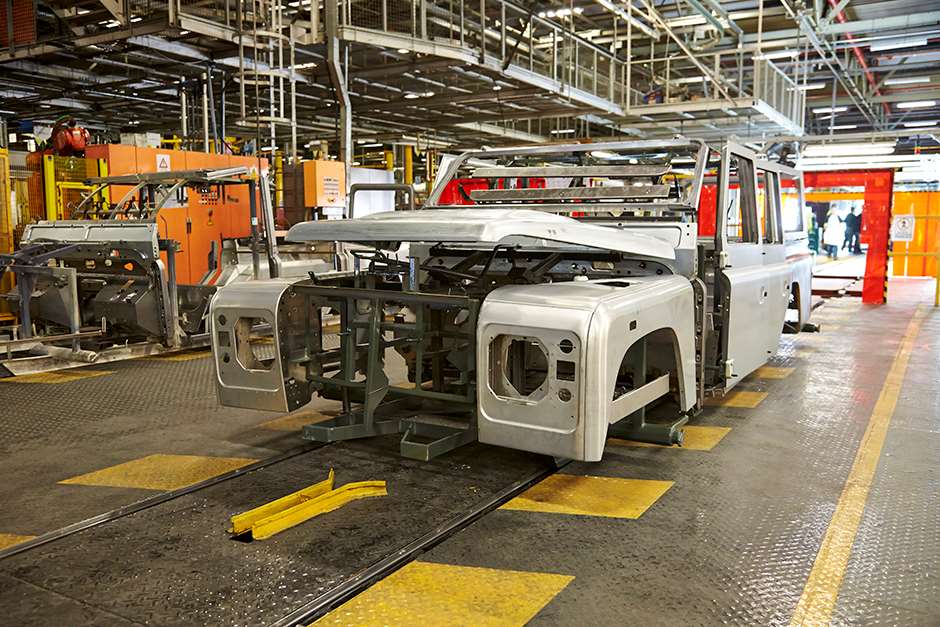 More excitingly for the heritage-minded visitor, the Solihull plant retains many of the test tracks used in the development of the original Land Rover, including the so-called ‘Jungle Track’ with its boggy lanes through tangled woodland handily located just opposite the Land Rover Experience Centre. Our recent facility tour was laid on to mark this final year of Defender production and, more importantly, to help advertise the fact that – for the princely sum of £45, made over to the Land Rover Experience centre – anyone can have a look at the last of the current Defenders being screwed, riveted and welded together on the production line. It’s hardly cutting edge – even the handful of robots are retirees from past Range Rover line duties – but it’s fascinating all the same, especially when you consider the Defender is built just yards away from JLR’s state-of-the-art modern off-roaders. Not to mention that new Jag XE.

You can book trips to see the modern lines too, but we recommend the Defender Celebration Tour first because when it’s gone, it’ll be gone forever. It concludes with a wonderful interactive exhibit located in the middle of the Defender production hall, designed to showcase the fascinating Land Rover/Defender model heritage – a room decked out in the style of the 1940s production facility, in which there are four original Land Rovers or chassis in various states of completion, and a sufficiency of models, literature, pictures and pieces of memorabilia to keep an enthusiast occupied for most of an afternoon. We would have lingered longer, had there not been another special treat laid-on – a unique chance to drive an original-era Land Rover on the famous Jungle Track where the model was developed.

The original Landie with its ‘crash’ lower gears and sweet little engine is a thing of pure pleasure to tootle around in, as many GRR readers will attest. Having driven various later-series models over the years right up to the latest versions, the Series One had managed to evade me so I was thrilled to try out one of the beautifully cherished examples pictured.

It came complete with original (and apparently rare) semaphore trafficators, and the standard-equipment free-wheel device on the front prop-shaft that cleverly improved road-manners in spite of its permanent 4×4 configuration. The driving position is constrained by a lack of seat adjustment and space (yes, even more so than the latest versions!) and if I’d spent more than 20 minutes behind the wheel I would surely have required a sports massage. (Perhaps from the driving seat of the latest Range Rover?) But the experience left my enthusiasm for Land Rovers entirely stoked-up, and, for anyone with even a hint of empathy for the marque, the Solihull Heritage Tour is a must.

(Meanwhile, check out our gallery at the top of this page.)

You can pay a bit more and drive the Jungle Track as we did too, but sadly only in more modern JLR products. Check out the Land Rover Experience website for more info.