Prints and the Revolution

Commissioned to create the riders’ silks for this year’s Magnolia Cup, fashion designer Morvarid Sahafi has drawn inspiration from the Suffragettes, women boxers and a host of other powerful female role models

“DOES POLITICS RUN IN MY BLOOD? Unfortunately, yes,” laughs 37-year-old fashion designer Morvarid Sahafi. A refugee since she was just a few years old, Sahafi and her family fled from Iran to Afghanistan in 1980, because her father was opposed to the new Islamist government. From there they traveled to Czechoslovakia, before eventually settling in Sweden. It was a disruptive life, with constant upheaval, and filled with stories that seem worthy of a Hollywood movie script. “I grew up in a house with a mother who was an activist,” she says. “She worked as a doctor in Afghanistan, but every morning she would get up and practice using a Kalashnikov, along with 12 other doctors and midwives. They had to learn to shoot because they were working in very hazardous areas, so they needed to be able to defend themselves.” After that, they would travel up into the mountains to help women who were badly injured, explains Sahafi, and yet her mother “never complained. She was always laughing and happy.”

Sahafi (who is known to her friends as Morv) and her father, meanwhile, often differed when it came to his political views, which were considerably less liberal than her own. Nevertheless, it was his insistence that she should “do something that makes a difference” that ultimately led her to her current career. “My mother, aunts and uncles and my older brother and sister all worked in medicine,” she explains, “but I knew I could never do that, because I didn’t have a brain for numbers. I wanted to be part of a voice.”

Following a Masters degree in Philosophy from Goldsmiths University, and an eight-year stint working as a photorealist painter and a fine art consultant, Sahafi’s career at a gallery came to an abrupt end when her boss made her redundant. “She said, ‘Why don’t you just go and do something on your own – you’re too creative for this. I’m firing you!’ and then handed me a cheque for £7,000.” And so MORV London was born – a fashion house unlike any other. 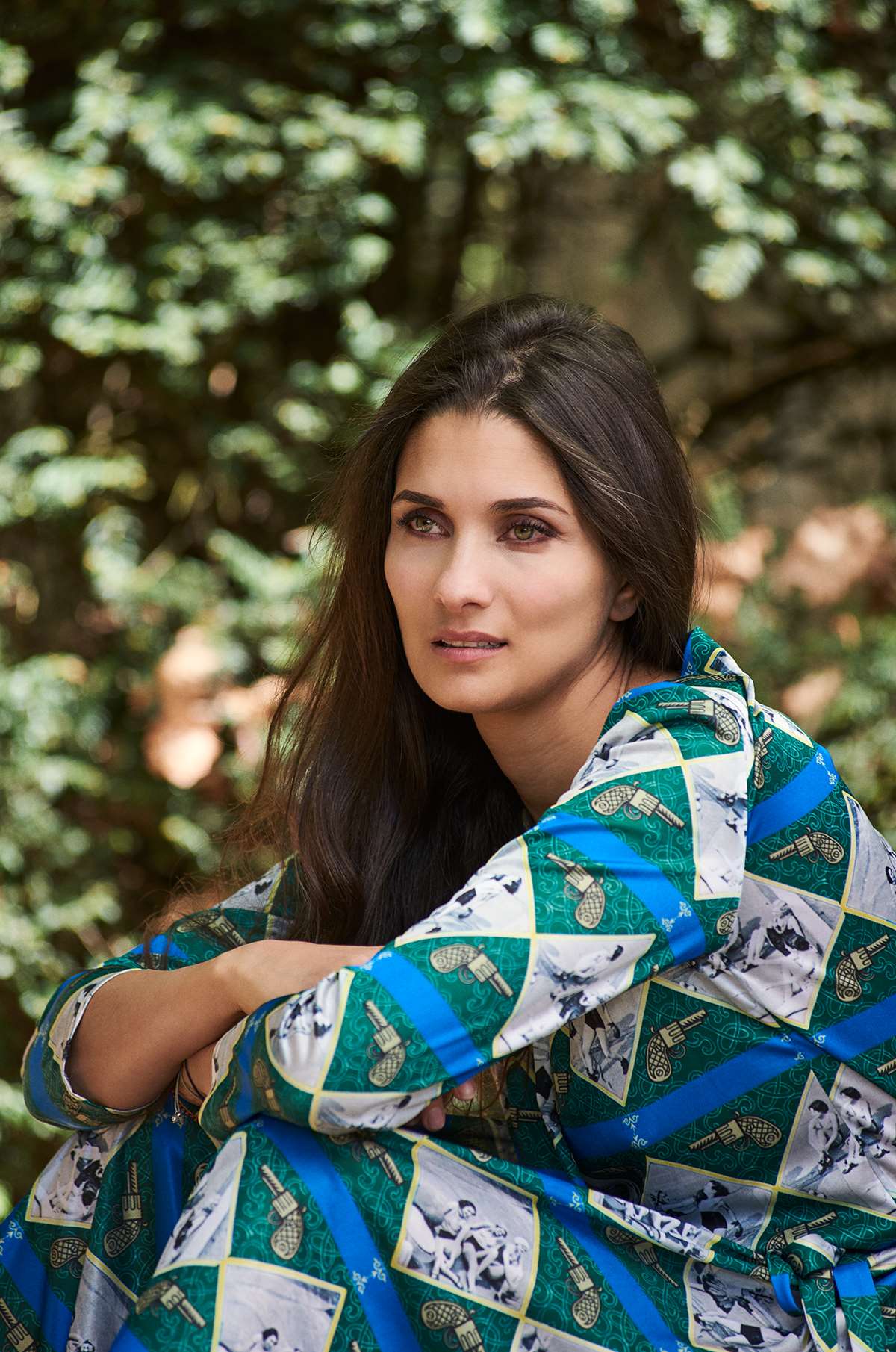 Described by Sahafi as “one of the billboards of our time”, the feminine patterns that adorn the brand’s dresses, jumpsuits and shirts contain images and text pertaining to the key political issues of the day. It should come as no surprise, then, given the recent discussions around women’s issues, gender equality and the #MeToo movement, that her latest collection pays tribute to some of the most influential and extraordinary women in history – the Suffragettes.

Look closer at one of her prints, for example, and you might see Emily Wilding Davison, who famously fell underneath King George V’s racehorse at the Epsom Derby, or the face of Sophia Duleep Singh, the Indian princess and treasured goddaughter to Queen Victoria who pioneered the movement for women’s rights while working with the Women's Social and Political Union, and who, after refusing to pay any taxes whatsoever, prompted the frustrated King to ask, “Have we no hold on her?” There are lesser-known Suffragettes with equally impressive tales to tell depicted too, accompanied by the words: “I can’t believe I still have to protest this sh*t” – inspired by a placard seen on a march against the Trump administration earlier this year.

The collection couldn’t have come at a more appropriate time, as 2018 marks a century of voting rights for women. And where better to commemorate the Suffragettes than at Goodwood’s ladies-only charity race, the Magnolia Cup, which takes place on August 2nd as part of the Qatar Goodwood Festival. Sahafi’s patterns will adorn the riders’ custom-made silks. “When I was approached to pitch to do the designs I felt so honoured, I jumped at the opportunity,” says Sahafi, who, following her initial meeting with the Duke of Richmond, worked through the night on sketches for each silk in order to secure the job. 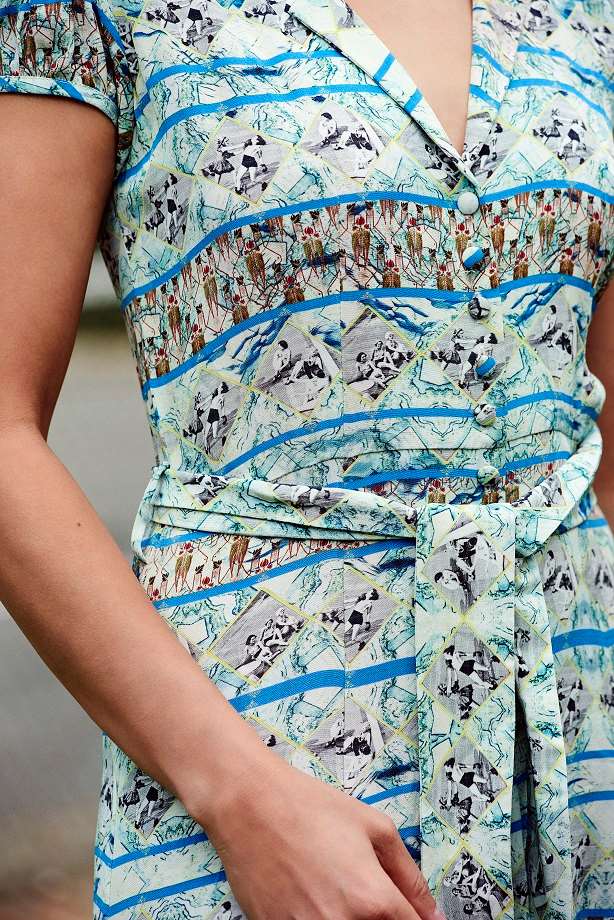 In addition to Suffragettes, trailblazing female scientists, physicists and some of the first female boxers can be seen on each design. Despite being from different fields and backgrounds, there is one factor that unites them, as Sahafi explains: “They’re all females who really had to go out of their way to achieve something.”

These are designs that extend beyond the racecourse, however, and on to the red carpet. “We’ve had a couple of celebrities asking specifically for the Nobel Prize print or the Suffragette print to wear to events,” says Sahafi, “and they’ve all come back saying that they loved wearing it because it was something they could talk about. Instead of standing in front of interviewers and saying, ‘I’m wearing such and such designer,’ they’re actually saying, ‘I’m wearing this print because it stands for something I have an opinion on.’” And yet it’s not a feminist agenda that drives MORV London – but rather, an ethical one. “I want the prints to encapsulate our times. So in two years the patterns might have something completely different on them,” Sahafi declares. “The real priority for me is to maintain a brand that’s both ethical and sustainable.” Describing the fashion business as “one of the most toxic, wasteful industries out there”, Sahafi is quick to point out that MORV London is a brand that shuns fast fashion, with pieces designed to last for years and be handed down to future generations. “I think I care about this so passionately because we moved so much from place to place as a family,” she says. “I don’t have a single coat or scarf of my mother’s – but I’d love my daughter, who is only two years old right now, to own something and to know that it was from her mum’s era.”

Classic cuts and high-quality fabrics should ensure that the garments stand the test of time. The label isn’t cheap, but, explains Sahafi, this is the future of fashion. “There’s a whole new generation of designers and consumers wising up to the fact that you can have sexy, beautiful, high-fashion pieces that are made from ethically sourced fabrics. You don’t have to wear dresses that look like sacks! I think in the future the stigma around buying a £20 coat will be so huge that high street brands will die out, because you just know that these prices aren’t realistic – it’s obvious that the person spending hours of their life making these so-called ‘machine made’ pieces isn’t getting paid enough.”

At the MORV London factory in Delhi, workers are paid a higher-than-average wage, and local women are trained in hand-stitching and embroidery so that they gain a trade for life. Sahafi has plans for designs in the future that incorporate patches on which women from both the UK and India will embroider pictures of their homes. “It’s about bringing awareness of the fact that these clothes are made by human beings,” she explains. “When you put emotion into a garment, hopefully that makes it much harder to throw away.”

At times, championing ethical practices and minimal waste while striving to make a profit can be a challenge. “The business has almost become too big for me,” says Sahafi, “and there’s so much to learn as you go along. I studied fashion 15 years ago when online simply wasn’t that important. Now I’m trying to focus on all these different things, and keep the business moving forwards at the same time. It is difficult.”

But, she emphasises, failure isn’t an option. “I don’t know what, exactly, we’ll be doing in the next couple of years, but I know I have to make it work,” she says. “I cannot stand failing, so I decided from a very young age that whatever I went on to do, I’d make sure the journey was the important part. For me, the journey has already been worth it. What I really wanted to achieve with the brand is for people to say: ‘I wore MORV London because it stood for something.’ And that’s already happening.”